While the club does offer real activities, it serves a purpose that was very clearly accomplished: to get a reaction from the community. Not shockingly at all, Lebanon residents are up in arms about an afterschool program that was approved facility use at local Donovan Elementary School.

The district said in a statement to Lebanon families that the club is not school-sponsored and that the school does "not endorse the activities or intent of this group or any other religiously affiliated groups offering after-school activities on our campuses.” 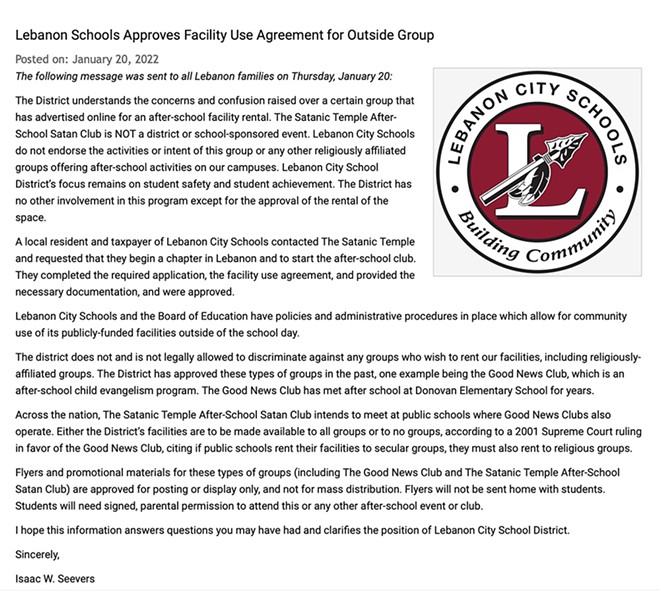 Basically, Lebanon does not worship Satan. But they do seem to go gung-ho for Jesus.

If you take a look at the page for the Satanic Temple After-School Satan Club, this is what the club offers:

“Trained educators provide activities and learning opportunities, which students are free to engage in, or they may opt to explore other interests that may be aided by available resources. The environment is open and parents are welcome to participate. While the classes are designed to promote intellectual and emotional development in accordance with TST's tenets, no proselytization or religious instruction takes place.”

And they actually have a specific motive outside of "promoting intellectual and emotional development." They form at schools that host the evangelical Christian organization the Good News Club.

On its website, the Good News Club calls itself a "Bible-centered organization composed of born-again believers whose purpose is to evangelize boys and girls with the Gospel of the Lord Jesus Christ and to establish (disciple) them in the Word of God and in a local church for Christian living.”

So while there hasn't been the same public outcry against the school for hosting a Christian-based organization on campus — with the stated goal of evangelizing children — did you expect the residents of Lebanon, home of the “sanctuary city for the unborn," to accept the After-School Satan Club lying down?

Well, yes, but they will take to Facebook to voice their outrage for sure.

On the Let's Talk Lebanon Ohio public Facebook group, posters are of course "sad," "disgusted" and "disappointed," rallying people to pray for the school and fire the staff. One of the 640-plus commenters so far said, "The opposite or alternate of Christianity is evil, no matter what religion. Don’t fight this through hate fellow Christian’s, fight this with prayer and love. Evil won’t kill evil."

Another noted, "My hope is that this abomination opens peoples eyes to how sick the world is getting…and that this club actually helps brings people to Jesus! They are attacking your children. Parents’ protect them. They need you. Lead them as far away as possible from this and other similar organizations. His glory will always prevail over the enemy’s! Stay strong."

Surprisingly, many also applauded the move, supporting freedom of religion.

But of course, who needs saving from Satan more than the children of a sheltered suburban school district such as Lebanon?

As a Lebanon alumna myself, I am far from surprised that the citizens took the bait from the Satanic Temple so easily, and, by clutching their pearls and panicking, immediately accomplished the temple's goal of raising awareness about religion in schools.

The Satanic Temple's first tenant is “one should strive to act with compassion and empathy toward all creatures in accordance with reason.” So are they really the ones out here trying to steal your children into a life of crime? Devil worship and animal sacrifice? Or, even worse, compassion and empathy? Unlike the Good News Club, the temple states "no proselytization or religious instruction takes place" in their program.

But you may be asking, how are these religious groups allowed to form at public schools in the first place? Well, it all leads back to a 2001 U.S. Court of Appeals case, Good News Club v. Milford Central School.

In this case out of New York, the evangelical children’s club argued that Milford not allowing them to host weekly bible-study sessions was a violation of their First Amendment rights.

Good News Club won in a 6-3 majority. Justice Clarence Thomas wrote in the court’s opinion, "When Milford denied the Good News Club access to the school's limited public forum on the ground that the Club was religious in nature, it discriminated against the Club because of its religious viewpoint in violation of the Free Speech Clause of the First Amendment."

The Satanic Temple, being a religious organization themselves, has expressed their First Amendment right in forming a club. While the club does offer real activities, it serves a purpose that was very clearly accomplished: to get a reaction from the community to make them aware of the Good News Club.

As someone who remembers the evangelical Christian group YoungLife being very well advertised during my time in Lebanon City Schools — despite the school claiming they don't endorse any religious activity— I personally think the district has all the vitriol they're receiving coming to them.