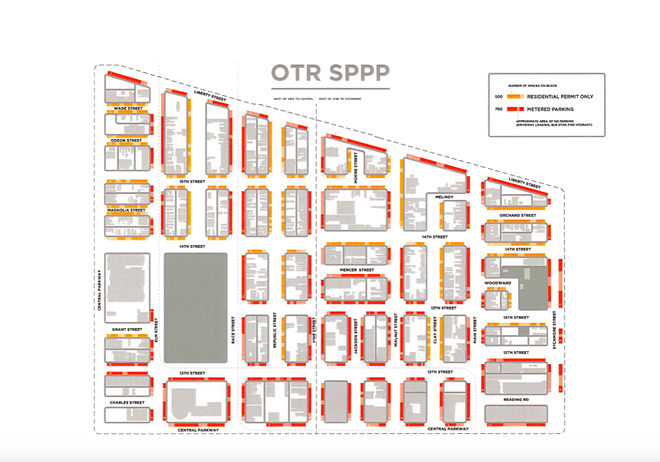 Cincinnati City Council Sept. 19 approved big changes to downtown parking policies, some of which have been in the works for years.

Council passed a parking permit plan for bustling Over-the-Rhine and removed requirements that developers build parking facilities or spaces when they develop in downtown, OTR, Pendleton and parts of Mount Auburn and the West End.

Under the revised permit plan, the city would sell an uncapped number of permits for OTR residents south of Liberty Street. The regular rate would be $60 a year — down significantly from the original proposal of $150 a year. Low-cost permits would be available to residents of subsidized housing at $25 a year.

The plan would cost the city about $180,000 in initial signage and other expenses, and about $75,000 a year to administer. Those costs would be covered by the fees from the permits.

Five hundred of the 1,290 spaces in the neighborhood would be permit spots. The spots are needed, city administration says, because OTR has become increasingly popular as a destination.

"Since 2003, the City of Cincinnati made concerted effort to revitalize Over-the-Rhine," reads a memo from Acting City Manager Patrick Duhaney about the plan. "A combination of public and private investment has brought residents, businesses and amenities to the neighborhood... the success, however, has created new conflicts. With more people choosing to live, visit or work in OTR, parking spaces are at a premium."

Parts of Clifton, Columbia Tusculum and Pendleton already have permit programs, but those cost $30 a year.

Mayor John Cranley has twice vetoed similar permit plans in OTR. Cranley says that it's unfair to block people from other parts of the city from parking on public streets they pay for. He also believes it will make parking harder — especially for those working in OTR who live elsewhere.

The Over-the-Rhine Community Council has concerns and was not notified of the city's adjustments until earlier last week, according to a letter from council president Maurice Wagoner. The letter noted that the plan seems closer to what the community council would like to see, but it contained two elements that raised concerns. One issue was that the price of the permits was not written into the legislation but left up to the city manager, creating uncertainty about the price in the future. The version council passed today changed that, and the $60/$25 price levels are built into the legislation.

The other concern from OTRCC was the two-level price of the permits, something the neighborhood council says isn't done in other cities.

"In our research, no other city creates this distinction based on housing status or income," the letter reads. "We have repeatedly expressed our opposition to this approach and seek an opportunity for further discussion about alternative solutions."

OTRCC's Margy Waller says that proving low-income status may be onerous or humiliating for some residents.

Boosters say that the permit plan will ease parking worries for those who live in the neighborhood — especially those with low incomes who can't pay for expensive garage spaces. CityBeat spoke to some residents in 2016 who were hoping for permits because parking had become so difficult near their homes.

One group not served by the permit plan — those who work in OTR. The neighborhood, which has a number of service-industry jobs, is already a tough place to park for those commuting to those positions. Earlier versions of the city's plan included so-called "flex spots," which would have been usable by drivers with and without the residential permits. That portion of the plan was dropped, however.

Council passed the final version of the permit plan with a veto-proof majority. It will take effect Jan. 1.

Another prong of the plan — removal of minimum parking requirements for developers building in downtown, OTR, Pendleton and parts of the West End and Mount Auburn — would encourage more pedestrian-friendly development and eventually decrease the number of cars in the neighborhood, supporters say. A city task force that helped draw up the plan cited the removal of parking minimums in parts of Cleveland, Nashville and Kansas City, Mo. as examples of the concept elsewhere.

Earlier this month, the Cincinnati Planning Commission approved the proposal.

"Parking minimums are well-intended, but they are an unnecessary regulation that violate their own stated goals of reducing traffic, threaten walkability, and lead to blight in our cherished urban fabric in Over-the-Rhine," a report from the city task force states.

Cincinnati City Councilman David Mann doesn't think the city is ready to roll back parking requirements, however. He says the move will make parking more difficult in OTR because developers will simply opt to forego parking even when it may be needed.

"I want to believe that the market will take care of all human needs," he said. "With all respect, I don't believe that."

Other critics of removing mandatory parking minimums for developers say the move amounts to another concession to developers who are already getting tax abatements and other incentives from the city while making parking in OTR more difficult to find.

Cranley echoed the sentiments of the city's task force, calling the move "progressive," claiming removing the parking minimums would make OTR more walkable and more affordable as it lowers costs developers pay to do projects. Each parking space can add as much as $15,000 to the cost of a project. It is unclear whether those savings would translate into more housing affordability, however.

"If we want to see the city to grow at all income levels, we have to do things like this," Cranley said.

The parking plan has taken a long, winding path to get to this point.

In February 2016, Cincinnati City Council directed city administration to create the task force on parking in OTR made up of staff from the offices of the city manager, the department of community and economic development, the city's parking division, the transportation and engineering department and city planning. The task force also tapped Walker Parking Consultants, community groups in OTR and development organizations as well as holding public input sessions. That process eventually yielded the basis for the plan council passed today.