The tie made her unable to eat or drink and caused a wound that "went down to the bone." 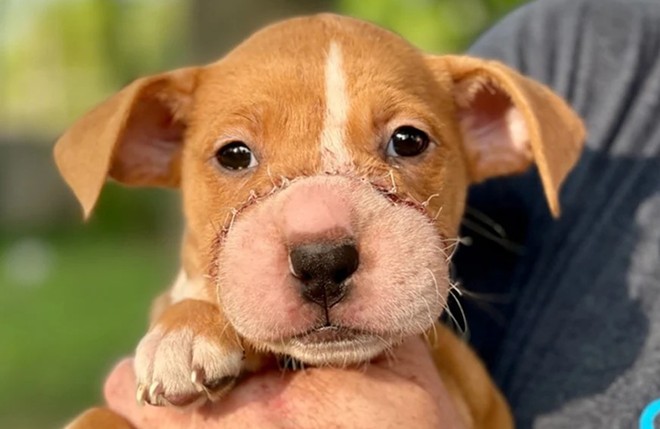 Photo: facebook.com/CincyAnimalCARE
Tiffany, after her wounds were treated

On May 12, a puppy was brought to Cincinnati Animal CARE in Northside.

That's not an uncommon occurrence for Hamilton County's humane society and shelter. But this puppy was different: A hair tie had been wrapped around her muzzle, restraining her mouth, causing intense swelling and a wound that "went down to the bone," says Cincinnati Animal CARE.

Now PETA is offering a reward of up to $5,000 for anyone who has information that can lead to an arrest and conviction on cruelty charges for the person who did it.

The puppy, called Tiffany — after the 1980s Pop star, says Cincinnati Animal CARE — was found wandering the streets of Lockland. She was brought in by a good samaritan and has since been treated by the shelter's medical team, who removed the hair tie and patched up her wounds. Tiffany is recovering in a foster home.

PETA is asking anyone with information on the abuser to call Cincinnati Animal CARE at 513-541-7387.

“This puppy should have been loved and cared for, but instead, someone apparently fastened a band around her muzzle, leaving her in pain and unable to eat or drink,” says PETA Senior Vice President Colleen O’Brien in a release. “PETA is seeking the public’s help so that whoever abused this dog can be held accountable and stopped from hurting anyone else.”

Cincinnati Animal CARE is also accepting donations for Tiffany's medical bills, with a prompt on their Facebook page. So far, they have received $2,661 for her care.