“All PETA wants for Christmas is for Kroger to stop profiting from chained monkeys,” says PETA President Ingrid Newkirk. 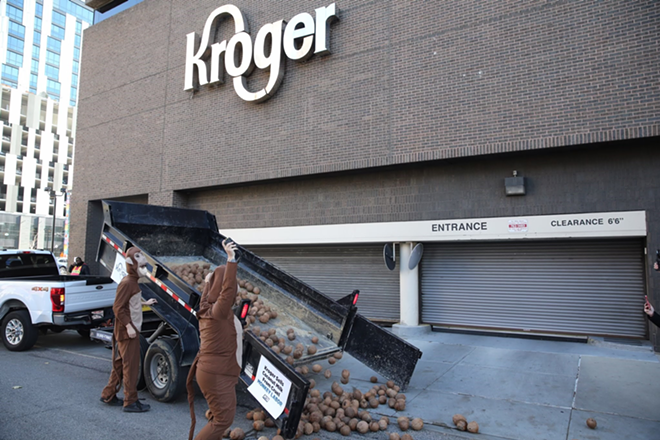 PETA has just put Kroger on its Naughty List, a collection of the "11 top animal-offending companies" in the U.S.

The reason? Kroger has yet to stop selling coconut milk from Chaokoh, a Thai company that uses forced and captive monkey labor to pick its coconuts.

“All PETA wants for Christmas is for Kroger to stop profiting from chained monkeys,” says PETA President Ingrid Newkirk. “By ending its support of abusive brands like Chaokoh, Kroger could give these long-suffering animals a little peace on Earth.”

Last month, PETA dropped a "big, fat pile of coconuts" at Kroger's downtown headquarters to ask them to stop doing business with Chaokoh. (PETA wants people to know those coconuts were humanely picked.)

And earlier this year, Go-Go's singer Belinda Carlisle, who now lives in Thailand, also wrote a letter to Kroger on behalf of PETA asking them to ban Chaokoh from their stores.

A PETA Asia investigation (don't click on this link if you don't want to watch a video of monkeys being abused) uncovered that Chaokoh was using monkey labor.

"When not being forced to pick coconuts or perform in circus-style shows for tourists, the animals were kept tethered, chained to old tires, or confined to cages barely larger than their bodies, deprived of any semblance of a life," said PETA. "Many monkeys displayed repetitive behavior indicative of extreme mental anguish, including one who chewed on his own limbs. One coconut farmer confirmed that when monkeys are terrified and try to defend themselves, handlers pull their teeth out."

More than 26,000 other stores, including chains Costco, Walgreens, Food Lion and Stop & Shop have stopped doing business with Chaokoh.

"Starbucks, which profits from an upcharge of 60 cents or more on eco-friendly, dairy-free milk; Petco, where horrified customers have found dead betta fish floating in tiny plastic cups right on store shelves; and Urban Outfitters, which sells clothing made of wool and other materials stolen from terrified animals," says the group.