A court date has been set for the trial of 23-year-old Earl Jones, who is accused of killing 19-year-old Kevin Neri last year after an ongoing argument via text messages regarding Neri’s relationship with Jones’ ex-girlfriend Cyerra Prather. 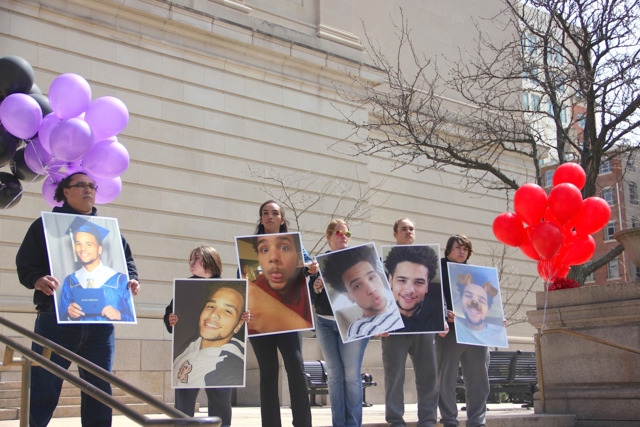 Photo: Nick Swartsell
Holding signs with his photo on them, family and friends of Kevin Neri protest outside the Hamilton County Courthouse April 2.
A court date has been set for the trial of 23-year-old Earl Jones, who is accused of killing 19-year-old Kevin Neri last year after an ongoing argument via text messages regarding Neri’s relationship with Jones’ ex-girlfriend Cyerra Prather, with whom Jones has a child.

Jones will stand trial Oct. 10 for shooting Neri, who was unarmed, outside the house Neri shared with his girlfriend — unless Jones takes a controversial plea deal offered by prosecutors first.

Jones is charged with murder in the May 16, 2016 incident but has been offered a deal for manslaughter charges by Hamilton County prosecutors, CityBeat has learned. The potential deal for Jones has angered Neri’s family.

Jones, who is white, shot Neri, who was black, after using the word “nigger” in text messages to his ex-girlfriend in which he indicates he doesn’t want the child the two had together raised by a black man. Jones also sent racially charged texts to Neri during mutually heated exchanges between the two.

Neri’s family points out that Jones drove from Hamilton to Colerain Township, ostensibly to pick up his son, before he shot Neri, and that he took a gun out of a locked safe and brought it with him. That means Jones had time to think about his actions, the family says — a key factor in charging a defendant with murder.

“If this case is properly presented, there’s no doubt in my mind that a jury will find him guilty of premeditated murder,” Neri’s mother Deneal Neri says. “He made a decision to get a gun out of a safe, he made a decision to drive 20 minutes. If he was so scared of my son, the moment he saw him walk out of that door, he should have taken off. Who goes with a loaded gun to pick up their son? My son was inside eating a bowl of cereal.”

After shooting Neri multiple times, Jones called 911, told operators he was turning himself in and said he acted in self-defense. Jones’ family, however, says that’s not possible, and that there was no physical altercation between the two before Neri was shot and killed.

Documents from the Hamilton County clerk of courts list 15 witnesses to the shooting. Depositions collected by investigators from those witnesses are sealed, and none listed on the initial report from Colerain Township police returned calls asking for comment by CityBeat.

Jones’ attorneys have declined the county’s plea offer, but it will likely stay on the table for now, a prosecutor told the Neri family outside Judge Leslie Ghiz’s courtroom June 26 while a CityBeat reporter was present.

“This is the kind of situation where it will probably stay open,” Hamilton County assistant prosecutor Gus Leon told Neri’s family about the plea deal. “Sometimes when we have a very strong case, we don’t leave it open. We tell the defendant it’s now or never. But that’s not the case. There’s a serious risk at trial. There’s always a risk, but in this trial there’s a serious risk.”

CityBeat reached out to Leon for further information about the case, but got no response. The Hamilton County prosecutor’s office declined to comment on the case for CityBeat’s original story in April.

Neri’s mother believes it’s the contentious text messages exchanged between the two and the fact that Jones turned himself in that have prosecutors aiming for lower charges.

“They’re thinking because the two had a history, because Earl turned himself in immediately, that that’s going to look great to a jury,” she said. “But Earl had a problem with Kevin the moment he found out he was dating Cyerra (Prather, Jones’ ex-girlfriend).”

According to a police report, he pulled out a .38 caliber Smith and Wesson after a brief argument and shot Neri in the front yard of the house Neri was living in with Prather.

Some controversy around the potential plea deal built in the days before an April 5 hearing in Hamilton County Common Pleas Court.

An April 2 rally organized with the help of Black Lives Matter Cincinnati drew more than 100 to the Hamilton County Courthouse to protest the possibility of a plea deal, and subsequent letters and calls to the prosecutor’s office urged Hamilton County Prosecutor Amy Trainter to rethink a plea deal.

Meanwhile, Jones’ defense team has pushed back at accusations that Neri’s killing had anything to do with his race.

During an interview with CityBeat in April, Bill Gallagher, one of Jones’ attorneys, wouldn’t discuss whether Jones will claim he acted in self-defense at trial but said another side of the incident will come out in court and that the racial aspects of the case have been blown out of proportion.

“Do I think that someone who uses the N-word is necessarily racist if the word was just used to provoke a response? No,” he said. “I understand the hurt and the anger the Neri family feels, but I think this incident is more about interpersonal relationships — an ex-girlfriend — than it is about race.” ©