A trail of tornadoes caused widespread destruction across at least six populated areas in Indiana and Ohio yesterday (May 27), reportedly leaving at least one person dead.

Officials estimate more than 75 homes were destroyed in the Indiana towns of Pendleton and Huntsville, though no serious injuries have been reported so far in the state.

The storms struck the area around Dayton especially hard — one of the only times a tornado has hit the city itself. 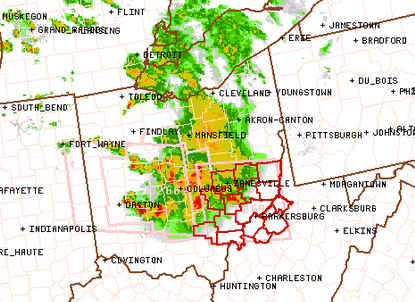 Eight miles north of the city in Trotwood, one tornado swept through and destroyed several apartment buildings shortly after 11 p.m. and just 40 minutes before another powerful twister followed its path.

There were no known fatalities and just a few minor injuries in the Dayton area. During a news briefing this morning, Dayton Fire Chief Jeffrey Payne called that "miraculous."

Search and rescue teams, including first responders from Cincinnati, are currently at work in the region searching homes and other structures.

Many local roads in and around the city are impassible, and I-75 was closed for a time due to debris. Crews have since removed enough wreckage to reopen the highway.

Dayton Power & Light, which supplies electricity to the region, said in a tweet today that some 58,000 of its customers are currently without power. That's down from 64,000 customers who were without electricity at 2 a.m. today.

Earlier this morning, the city of Dayton asked residents to conserve water because the city had lost power to water facilities.

At least one fatality has been reported in Celina, Ohio, where an 81-year-old man died after a vehicle was flung into his home. Twelve other people were injured in the city near the Ohio-Indiana border. City officials have said three of those injuries are serious.