Uber's "Cincinnati Mobility Lab" will use data and experts to better coordinate its drivers. Uber won't directly aid in public transit, but will share data that officials say could help determine where to expand transit services. 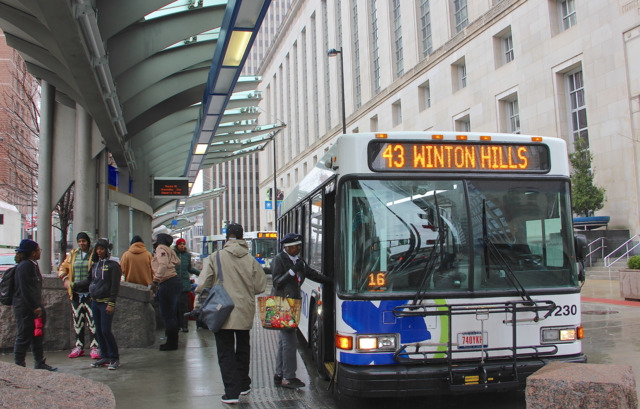 Hello Cincy! Are you going to check out the super blue blood moon tomorrow? Yeah, it sounds apocalyptic and freaky, but it’s really just the rare confluence of the moon doing several of its regular moon things at once. “Blue” means it’s the second full moon of the month — rare enough on its own. Add to that the fact that the moon is at its closest point to the earth — that’s the “super” part. Finally, while a “blood moon,” sounds extremely metal, it simply refers to the reddish tint the moon sometimes takes during lunar eclipses as a slight hint of sunlight shines out from behind it.

I don’t know if all that counts as news, but it’s super cool. On to more terrestrial concerns, though.

• Local transit agencies and the Cincinnati USA Regional Chamber will partner with Uber in an attempt to leverage the company’s enormous amounts of traffic data, local officials announced today at a news conference downtown. Uber has pledged to establish what they’re calling the “Cincinnati Mobility Lab,” the company’s first such endeavor and the first time it has partnered with local governments in that fashion. The center will use analytics experts and data collection to help Uber better coordinate its drivers. It will also to provide in-depth traffic data to the city that officials say could show them where to expand transit. In addition, transportation consulting firm Fehr & Peers will conduct studies of busy traffic corridors in the urban core to make sure those corridors are set up to allow public transit to thrive. Both the Southwest Ohio Regional Transit Authority and the Transit Authority of Northern Kentucky will get studies that officials say could help determine strategies for better bus service. It seems like much of this has already been studied, but alas.

• Cincinnati Preschool Promise has named a new executive director. Shiloh Turner will take the helm as the early education initiative’s new leader, according to a news release sent out by Preschool Promise’s board of directors today. Turner helped develop the Preschool Promise concept as far back as 2012 and was a strategist on the campaign to pass Issue 44, the school levy that funds the effort. She replaces Stephanie Byrd, interim director of Preschool Promise since January last year and senior vice president of early learning strategies for United Way of Greater Cincinnati, which oversees the preschool initiative. Turner will focus on quality improvement, wage issues — the language of the Preschool Promise ballot initiative promised a $15 an hour wage for preschool providers, something that has yet to happen — and boosting enrollment to CPP’s stated goals in the 2018-2019 school year.

• The researchers involved in this next study may want to check their data. Cincinnati made personal finance website WalletHub.com’s list of 10 best cities for football fans. This despite the fact that our team is… well… not so great a lot of the time. The website compared 240 cities with college and/or professional teams, considering 21 factors like stadium capacity, average ticket price, team performance level, attendance and season ticket prices. My only question is whether this ranking will help the Bengals win more games. No? Ok.

• This next bit feels more accurate. Ohio is near the top… or bottom, really…  when it comes to states with structurally deficient bridges. The Buckeye State has the 12th most outdated and insufficient bridges in the country, according to research released today by The American Road and Transportation Builders Association. Of the country’s 25 most-traveled deficient bridges, four are in Hamilton County alone. Dang. I bet you can guess at least a couple of them. (Spoiler: Columbia Parkway over I-471 and the Western Hills Viaduct are both in the top 10.) Six percent of the state’s bridges have key elements in poor condition, a situation that will cost roughly $27 billion to fix. Yikes.

• We’ve got a great new issue coming out tomorrow, but if you haven’t already, I’d invite you to check out our cover story on stands now. Hamilton County has a 40,000-unit gap when it comes to affordable housing. City leaders are working to address that issue, but as they do, residents in neighborhoods like Walnut Hills are struggling to stay in the communities where they’ve spent their lives. Here’s what that’s like. As Cincinnati works to address its issues, elected officials in Columbus are mulling an effort that would require any housing receiving tax breaks built in hot neighborhoods like Short North to have 20 percent of its units affordable to residents at area median income or below. The move would also require developers receiving incentives to pay workers at least $15 an hour.

• The Cleveland Indians will officially ditch the offensive Native American caricature that has served as their logo since 1948. So long, Chief Wahoo. The Indians will keep the trademark on the logo, however, allowing them to continue making money on the image. Major League Baseball will no longer feature gear with Wahoo on its website, but local shops will continue to stock merchandise with the logo.

• Finally, some news that may not be all that surprising to you. Ohio Gov. John Kasich is already making some moves that could set him up for another run at the presidency in 2020. Kasich has been planning trips to New Hampshire — that fabled presidential primary prize — and last night on Late Night With Seth Meyers sounded like he was anything but ready to relax and enjoy a John Boehner-style golf and bourbon retirement. Kasich talked up his belief in something he calls “positive populism” over politics and his views on immigration, among other issues. Hey, just two more years before we go through this presidential election thing all over again. Might as well get started ignoring all this stuff now.

More Than 3,500 Ohioans Will Have Student Debt Canceled After $1.85 Billion, Multi-State Settlement with Navient

More Than 3,500 Ohioans Will Have Student Debt Canceled After $1.85 Billion, Multi-State Settlement with Navient