Here's how Ohio's primaries shook out

Democratic Party voters turned out in larger numbers than past primaries this year — but does that signal a blue wave crashing in November? 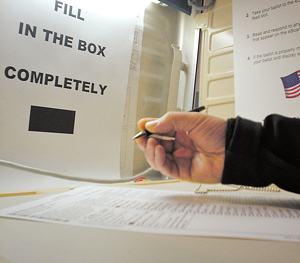 Hello, all! Did you vote yesterday? You probably want to know how that all turned out, eh? Or heck, maybe you were like me and stayed glued to the Hamilton County Board of Elections' site all night. Either way, let’s take a look at how the whole thing went.

One thing pundits have been watching: whether voter turnout in Ohio and Hamilton County indicates a “blue wave,” or big energy among Democrats to get their candidates elected. So, did that happen? Eh… kind of. Dem turnout statewide was 45 percent this primary, compared to 55 percent for Republicans. That’s not so great, but it’s much better than the 2016 primary, when only about 37 percent of Democrats turned out to the GOP’s 62 percent.

In Hamilton County, the Democratic Party actually sent more folks to the polls. Exactly 55,572 Democrats voted this primary election compared to 54,626 Republicans. That not-quite 100-voter-margin seems small until you consider the fact that 1982 was the last time more Democrats turned out for a Hamilton County primary than Republicans.

Democrats are touting statewide and countywide turnout as a win. They’re also celebrating the fact that 10 of their 16 congressional nominees this primary are women — a margin never before seen in a primary season.

• No big surprises in the GOP and Democratic Party gubernatorial primaries. Ohio Attorney General Mike DeWine bested his challenger, Lt. Gov. Mary Taylor, by a big 20-point margin in the Republican contest, while former Consumer Financial Protection Bureau Chief Rich Cordray handily beat out a number of challengers, including former U.S. Rep. Dennis Kucinich and State Sen. Joe Schiavoni, grabbing 62 percent of the vote. Those deceptively large margins come after bruising primary contests between DeWine and Taylor and Cordray and Kucinich. Both primary winners faced populist challenges that attempted to brand them as centrist, establishment candidates. That approach seemed less effective in those races, however, than it has in many contests post-Trump.

President Donald Trump tweeted out his congratulations to DeWine this morning, taking the opportunity to call Cordray a “socialist.”

• Voters overwhelmingly approved a plan that seeks to limit gerrymandering of congressional districts, with 75 percent of the state’s primary voters approving the proposal. Currently, lawmakers at the state house draw up districts directly and the governor either signs them or vetoes them. That’s not great if you’re like Ohio, which is currently GOP-dominated on the state level, in part thanks to state legislative district gerrymandering.

Starting in 2020, however, redistricting will take a more complicated process that, in its early rounds, draws more input from the party not in power (the Democrats, at least right now). However, if the majority and minority parties don’t agree on a map, eventually the majority party will still get to draw up the congressional map, though it will be valid for four years instead of the current 10.

After statewide landslide victories put huge numbers of GOP lawmakers in the state house in 2008, they drew up secret redistricting plans at a Columbus Hotel that led to incredibly lopsided congressional districts. The result: while the GOP won only 52 percent of the state’s congressional vote in 2012, it grabbed all but four of the state’s 16 congressional districts. Critics of Issue 1, however, say that the plan preserved too much power for the majority party and was drawn up to keep a more equitable solution from getting passed.

The new rules could have big repercussions for Republicans like U.S. Rep. Steve Chabot, who has had his district nailed down for nearly a decade since it was redrawn to include parts of deep-red Warren County. Chabot won his primary this year easily, but even if he prevails against a strong challenger in Democrat Aftab Pureval, the new redistricting process will likely change his district.

• U.S. Rep. Jim Renacci won his bid to challenge U.S. Sen. Sherrod Brown for his seat this November. That’s not a surprise, either — Renacci received a formal endorsement from Trump, after all — but he didn’t pull as many votes as you might expect. Renacci grabbed just 47 percent of the vote in the five-way primary, with Cleveland-area businessman Mike Gibbons making a stronger than anticipated showing. Renacci’s campaign has been hobbled somewhat by questions around the ways he spent money from campaign funds meant for an abandoned gubernatorial bid.

• We saw an upset on the county level in this otherwise predictable primary. Fifty-eight percent of Democrat voters in Hamilton County selected Stephanie Summerow Dumas over party-endorsed James Wolf to challenge incumbent Republican commissioner Chris Monzel. Previously, Dumas served as the mayor of Forest Park for a decade and was also village manager in Lincoln Heights.

• County voters approved both a property tax increase to support the Public Library of Cincinnati and Hamilton County and a property tax renewal for the Cincinnati Zoo. Seventy-eight percent of voters decided they couldn’t cast a ballot against Fiona the Hippo, approving an extension to a levy that costs the owner of a $10,000 home about $10 a year, while 63 percent gave the library a thumbs up. The library levy will raise property taxes on a $100,000 home by about $35 a year.