According to the bill, plaintiffs in COVID lawsuits would need to show the viral exposure was caused by conduct that was “reckless,” “intentional,” “willful or wanton.” 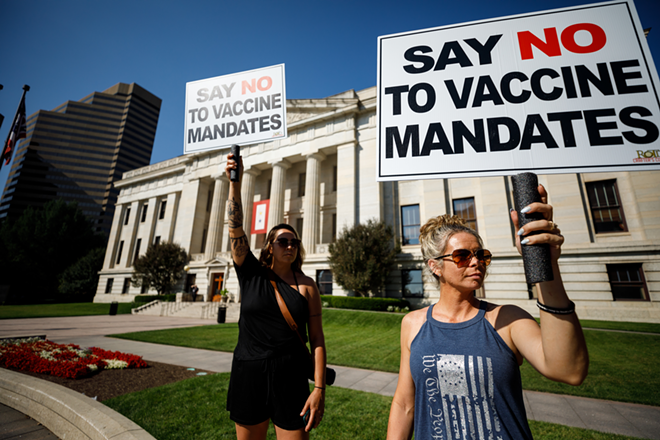 Photo: Graham Stokes/Freelance Photographer
Two women protest vaccine mandates Aug. 24 outside a hearing at the Statehouse on legislation that would outlaw the practice from employers.

House Bill 424 would raise the threshold plaintiffs must meet to prevail on a COVID-19 lawsuit. Plaintiffs would need to show the viral exposure was caused by conduct that was “reckless,” “intentional,” “willful or wanton.”

The bill would provide protection from lawsuits for people who spread COVID-19 through negligence, generally defined as the failure to do something a reasonable person under the same circumstances would do.

The legislation would also ban schools, colleges, and government offices from requiring anyone to receive the COVID-19 vaccine or show proof of their immunization status. They would also not be allowed to deny anyone “full and equal treatment” of their services if they are unvaccinated, and they would not be able to fire unvaccinated employees.

Ohio Republicans have spent months pushing various proposals to limit or outlaw the ability of businesses, schools and employers to mandate vaccination. Koehler’s bill, however, is the first instance of this paired with protection for people who spread COVID-19.

Koehler did not respond to a request for comment left with a legislative aide.

Last year, lawmakers passed legislation establishing a similar immunity against COVID-19 claims. However, that bill contained no provisions regarding vaccines and expires on Sept. 30, 2021. Koehler’s bill would make permanent the immunity.

HB 424 would also provide immunity for healthcare providers during a declared disaster or state of emergency. This includes long-term care facilities, which were home to at least 8,000 of Ohio’s roughly 21,600 documented COVID-19 deaths.

Brad Ingraham, a lobbyist for the Ohio Association for Justice, which advocates for plaintiffs’ rights, said the bill would go too far in shielding “bad health care providers” from medical liability.

“OAJ has significant concerns about codifying COVID-19 civil immunity,” he said. “When made permanent, unintended consequences are much more likely.”

One unusual piece of the bill is its emphasis that violating any government order, recommendation or guideline related to COVID-19 could not be used to demonstrate negligence, according to Jill Krueger, a regional director at the Network for Public Health Law. She said, the bill goes so far as to provide that there’s a presumption that a government order, recommendation, or guideline is not admissible as evidence that a duty of care has been established.

“It seems to go out of its way to prevent plaintiffs from arguing there was violation of a government order, recommendation, or guideline in order to prove a claim of negligent, reckless, or intentional misconduct,” she said.

The Inter-University Council, which represents Ohio’s public universities, did not respond to an inquiry. However, its President and CEO Bruce Johnson told Gongwer News Service that most of the 14 universities he represents have imposed a vaccine mandate and the holdouts are strongly considering it. He urged lawmakers to leave such decisions to the schools.

It also prohibits them from “discrimination” against people for refusing to receive a vaccine, including prohibiting their entry or requiring that they wear masks.

The legislation would also prohibit businesses (besides health care facilities), governments and schools from requiring people to wear a facial covering or undergo COVID-19 testing.