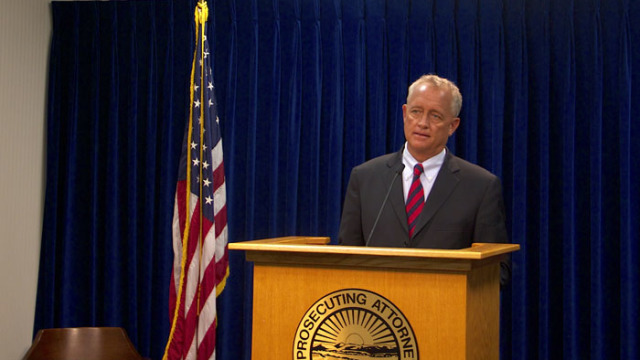 Deters, 59, began moonlighting in 2009 through lucrative affiliations with law firms that have earned him at least $2 million in salary and lawsuit settlements. Because he practices law on the side, he forfeits the $130,661 full-time salary dictated by state law for 2017. Instead, he costs taxpayers a discounted $91,877.

Deters asserted his statutory right to carry on in private practice in a Dec. 27 letter to the county's Board of Commissioners. He stated no reason for exercising that option. He didn't disclose for whom he will be working. He didn't provide a breakdown of how much time he will spend for the county versus his outside legal ventures. His spokesperson, Julie Wilson, did not respond to CityBeat's request for an interview with Deters.

As CityBeat reported Sept. 9, Deters received $200,000 a year — from 2009 through 2013 — while working for the now-defunct Waite Schneider Bayless & Chesley, according to his 2013 divorce papers. That gravy train ended when name partner Stan Chesley was disbarred in Kentucky and retired, but Deters capped that five-year run with a $990,000 payout from a lawsuit settlement. He now works for another Kentucky-disbarred lawyer, the unrelated Eric Deters, appearing as counsel in Deters' avalanche of civil cases against Abubakar Atiq Durrani. A former Mason doctor, Durrani fled the country in the wake of criminal charges of performing unnecessary surgeries and billing federal health programs for his work.

As prosecuting attorney, Deters supervises a staff of about 187 employees, including the full-time equivalent of 118 lawyers. Not only does the office prosecute crimes in court, it serves as legal counsel to all offices of county government and to individual county officials, for example, when they are named in lawsuits in the course of performing their official duties.

Of the elected prosecutors in Ohio's 10 most-populous counties, Deters is the only one who splits his time between public office and private practice.

"It's an extremely demanding job," says Mike Allen, the Cincinnati lawyer who preceded Deters as Hamilton County prosecutor for seven years. "The prosecutor supervises a staff of 180 or something like that, and if you try cases, like Joe has done lately, you've got trial prep, too. I don't know how you do it, with all the Durrani cases and all the normal duties of the prosecutor. I would not have had time to engage in the private practice of law when I was prosecutor."

Others look askance at Deters' penchant for moonlighting.

Denise Driehaus, who just started a four-year term as one of Hamilton County's three county commissioners, points out that the prosecutor is involved in the county budget process and other matters.

"I think the county deserves a full-time prosecutor," she says. "As commissioners, we have no control over that, but it's frustrating not having the prosecutor available full-time for the county."

"Already we are seeing how attorney Deters' election to go part-time is affecting the administration of justice in the county," Portune says. "Joe's election to withdraw from the Tensing (murder) prosecution because he lacks the time to prepare is a case in point where the administration of justice in Hamilton County is being placed in potential jeopardy because of his desire to make more money as a private practitioner rather than to work full time for the people that elected him."

The third commissioner and only Republican on the board, Chris Monzel, is in Washington, D.C., for the Trump inauguration and could not be reached for comment.

Alan Triggs was Deters' Democratic opponent in the Nov. 8 election. He received almost 46 percent of the vote in spite of a campaign warchest one-eighth the size of Deters'. Informed that Deters had extended his part-time status, Triggs reiterated his opposition to the practice.

"I tried to let people know during the campaign that he's a part-time prosecutor and that I would work full-time. People were shocked, but that's what they apparently want," he says. "They have over 100 attorneys working in that office. I don't see how someone can manage over 100 attorneys part-time."

Ohio law allows elected prosecutors to engage in private practice and contains separate pay scales for those who do and do not. It does not require moonlighting prosecutors to disclose the amount of time they spend on either job.

"That statute was written for small and medium-sized counties," Allen says. "It's obviously up to the prosecutor to decide whether it's appropriate, but it's not something I would do for the size of the Hamilton County prosecutor's office."