The National Resources Defense Council says P&G's Charmin brand toilet paper is made by clear-cutting the Canadian boreal forest. The company, however, says it is committed to improving its environmental practices. 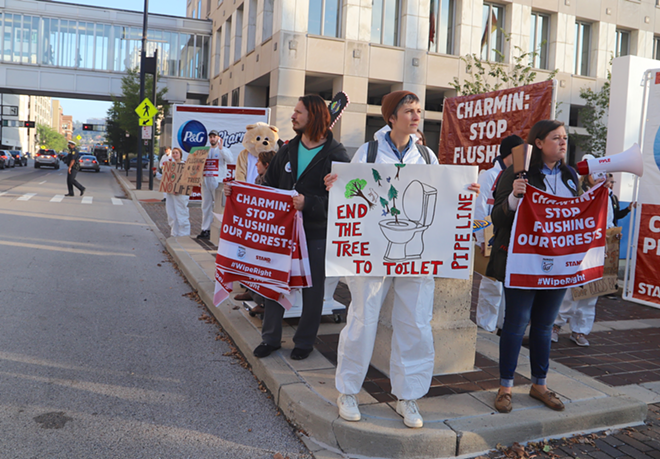 The demonstration was organized in part by New York-based National Resources Defense Council, which gave Charmin the lowest possible rating in a recent report called "The Issue With Tissue." Charmin received its "F" grade because it is made with virgin, non-recycled fibers from trees often clear-cut from places like the Canadian boreal forest, one of the largest in the world.

Scientists say the forest, one of the last intact old-growth forests in the world, helps sequester carbon, which, when released via the burning of fossil fuels and other materials, contributes greatly to the earth's ongoing climate change. Large forests like the Canadian boreal can absorb some of those emissions — as long as they're not cut down.

"Most Americans probably do not know that the toilet paper they flush away comes from ancient forests, but clear-cutting those forests is costing the planet a great deal," NRDC Canada Project Director Anthony Swift said in a statement. "Maintaining the Canadian boreal forest is vital to avoiding the worst impacts of climate change.”

NRDC also highlights the impacts clear-cutting has on indigenous communities, which continue to rely on the boreal forests.

While protesters in Cincinnati were chanting outside P&G's shareholder meeting, two others stood inside the meeting silently holding signs reading "Charmin, stop flushing our forests" during remarks by P&G CEO David Taylor. During his speech to roughly 200 shareholders in attendance, Taylor talked up the efforts the company has made on environmental issues.

P&G has said it has met with the NRDC to come to agreements about new environmental commitments it can make. The company says that it replaces each tree it cuts down with at least one new tree, has helped replant 2 million trees destroyed by the California wildfires this year, has invested heavily in research strengthening the fibers making up its toilet papers so that people can use less and has continued to research fibers not derived from trees and those from fast-growing varieties of trees certified by environmental organizations.

NRDC and local activists, however, say that the company isn't doing enough, that other toilet papers don't use the virgin tree fibers made from old-growth forests, and that Charmin should follow suit. Charmin, along with other popular brands like Quilted Northern and Angel Soft, received "F" ratings in the NRDC report. Meanwhile, some brands using recycled elements like 365, Green Forest, Natural Value and Seventh Generation received "A" grades.

"We’re calling on Procter & Gamble, as the maker of America’s leading toilet paper brand, to stop flushing forests down the toilet," study co-author and NRDC Boreal Corporate Campaign Manager Shelley Vinyard said prior to the rally. Vinyard also spoke at the company's shareholder meeting. "Procter & Gamble has the innovation resources to bring Charmin into the 21st century; the question is whether the company will embrace its reputation as an innovator to create sustainable products using recycled material instead of clear-cut trees.”