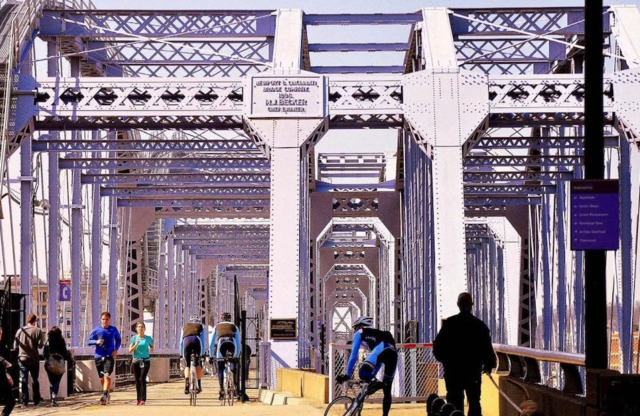 FACEBOOK.COM/PURPLEPEOPLEBRIDGE
The pedestrian Purple People Bridge closed on May 11 after a stone from one of its piers fell into the Ohio River.

Renovations for the Purple People Bridge soon will be getting a boost from two large grants being put towards the project.

Newport Southbank Bridge Company president Will Weber says in a press release Monday the company will receive nearly $300,000 for the lengthy planned renovations.

The Devou Good Foundation pledged $154,000 to help fund the short-term repair of the bridge and a portion of the long-term repair, says Weber.

The bridge closed in May after portions of it fell into the Ohio River. While most of it reopened to pedestrians in July, the northernmost section remains closed.

Weber says the short-term restoration will reopen both sides of the bridge to pedestrians and cyclists.

"The Purple People Bridge is our region's most comfortable and accessible connection between Cincinnati and Northern Kentucky," says Wade Johnston of Tri-State Trails.

The John and Sue Topits Foundation of Covington also has announced a contribution. Weber says the foundation is offering a $100,000 matching grant to the bridge repair fund.

The Topits Foundation says it will match all other contributions up to a total of $100,000. This matching grant is available until September 30.

Newport Southbank Bridge Company says it continues to work with the engineers on plans to repair and fully reopen the pedestrian bridge.

Details of the timeline for construction and closures will be announced soon.