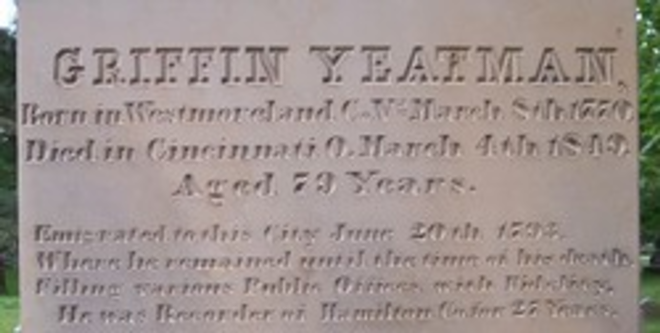 If you know an individual or group that volunteers their time to preserve and promote historic documents or sites in Hamilton County, you can nominate them for an award.

The Hamilton County Recorder’s Office is accepting nominations for its annual Griffin Yeatman Award. Created in 1994, the award recognizes people who work to help others understand historic preservation and promote public interest in the topic.

Application forms may be accessed here.

Past winners include Gorman Heritage Farm, Cincinnati Police Museum, Indian Hill Historical Society, the Cincinnati Observatory and American Jewish Archives, among many others.

The award is presented for excellence in historical preservation, research or achievement that has contributed to the preservation of buildings, sites, structures and objects pertaining to Hamilton County's history.

Deadline for submissions is March 31.

Griffin Yeatman was a Cincinnati pioneer and the Hamilton County recorder from 1828-35. He ran the Square and Compass Tavern, which was visited by famous guests including George Roger Clark, Andrew Jackson and Aaron Burr. Also, Yeatman was the first recorder elected to the position by Hamilton County citizens.