Reports: Kasich Will Drop Out Today 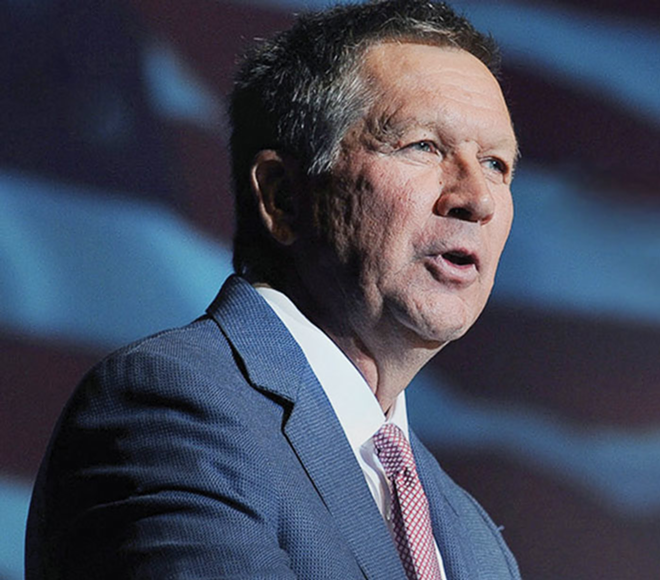 With U.S. Sen. Ted Cruz departing the GOP presidential primary following last night's big win for Donald Trump in Indiana, Ohio Gov. John Kasich was, for a moment, Trump's sole challenger in one of the strangest primaries in memory.

Now, however, there are multiple reports citing a senior campaign advisor saying Kasich is dropping out of the race. The Kasich campaign has cancelled previously-planned campaign stops and scheduled a 5 p.m. news conference in Columbus, where iKasich is expected to make an official announcement.

Kasich was a long-shot candidate at best: Trump has 1,048 delegates and needs only 1,237 to end the race outright. Kasich, meanwhile, has only 153 delegates, still less than now-departed Cruz and long-gone U.S. Sen. Marco Rubio.

Despite this, the Kasich campaign this morning confidently released a  Star Wars-themed video (it is May 4, after all) laying out a nightmare scenario for conservatives: It's 2017, and Hillary Clinton has trounced Trump in the general election, going on to nominate a Supreme Court justice and institute a raft of liberal policies. But there's hope, and that hope's name is... you guessed it: John Kasich.

Kasich faced a nearly-impossible path, however. To win the GOP nomination, he would have had to somehow prevent Trump from gaining the last few delegates he needs to clinch the nomination. Kasich would then have had to best Trump at a contested convention, convincing delegates that it would be better to vote for him than the candidate primary voters sent them to vote for.

Kasich continuing his campaign at this point would have flown in the face of even GOP Chairman Reince Priebus, who has called Trump the party's presumptive nominee. But Kasich did have a couple points to argue for his nomination in the very unlikely contested convention scenario: In what started as a huge primary field, more primary voters voted for some other candidate besides Trump. Kasich's campaign has also pointed to polls showing him winning against Clinton in a general election in November, something Trump has not been able to claim. (Most recent polls show Clinton widening her margins against Trump, though one has Trump neck and neck with Clinton. So far, it's an outlier.)

“Since last March, Governor John Kasich has spent more than 200 days out of state, pursuing his presidential ambitions and ignoring the needs of the people of Ohio," the Ohio Democratic Party said in a statement, accusing Kasich of "gallivanting across the country" instead of working on issues in Ohio.