Since 1947, Cincinnati Police have operated a gun range just a few hundred yards from residential areas in Lincoln Heights and other municipalities north of the city. But that could change soon. 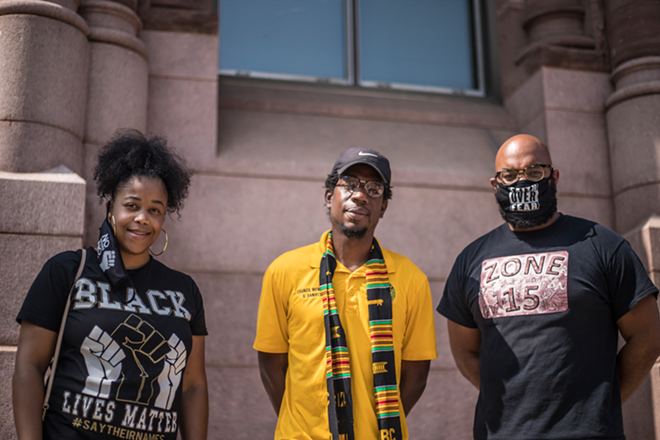 Nick Swartsell
Alicia Franklin, Daronce Daniels and Carlton Collins of Lincoln Heights are advocating for the relocation of a Cincinnati Police gun range in their community, saying it is disruptive and traumatic.

Alicia Franklin's 4-year-old son is terrified to go outside most days during the daylight hours due to the almost constant sound of gunfire and occasional shouting and explosions coming from a location about 500 yards from their Lincoln Heights home. Her oldest son struggles to concentrate on the schoolwork he is doing remotely during the pandemic due to the noise.

Calling law enforcement wouldn't do any good for Franklin or her neighbors. The police are the ones doing the firing.

Since 1947, the Cincinnati Police Department has operated a firing range and training facility at the location, which sits between the municipalities of Evendale, Lincoln Heights and Woodlawn.

"For more than 30 years, I've heard these gun shots," Franklin says. "My kids have to deal with this all day every day. They can't just go out and play when they want to. I'm a stay-at-home parent who works from home. I hear these gunshots while I'm on calls all day. This is unfair to the community. It's time for this gun range to go."

Residents of Lincoln Heights and the other communities bordering the range on have long complained about the noise. But recently, the push to have the site relocated has intensified. The mayors of the three municipalities asked the city in July to close up shop and move somewhere farther from residential areas.

Hamilton County Commissioners have offered the city help in moving the gun range, and now, at least one Cincinnati City Councilmember is pushing for a hearing about that possibility.

"I understand the importance of having a gun range where our Cincinnati Police Department’s 1,000 members can practice target shooting and where the K-9 units are trained,” Councilmember Jan-Michele Kearney said this week. "But it must not be located in a residential area.  We are harming the neighboring communities, and that must stop. We know that Black and Brown communities are more likely to be victimized by environmental hazards, adding to the higher rates of health problems. The gun range is yet another example.”

Lincoln Heights was one of the first predominantly Black municipalities in the country when it incorporated under black leadership in 1947 — the same year the gun range opened — and today almost nine in 10 of its residents are Black. Like many small municipalities, it has struggled with revenue issues and other troubles, but those have been compounded by the fact that the land Lincoln Heights' founders were allowed by Hamilton County to incorporate did not include factories and other tax revenue-generating industry sought during an earlier 1939 incorporation attempt. That first attempt was stymied by the opposition of the community's white neighbors.

Despite that, Lincoln Heights still thrived for a time as its residents found gainful employment in the area's bustling industrial corridor. But that began to change in the 1970s and 1980s as de-industrialization began. Unemployment rose, tax revenues fell, and Lincoln Heights suffered population loss and poverty even as nearby suburbs boomed.

Throughout Lincoln Heights' rise and decline, the shooting range has been a constant

"Gunfire has been the soundtrack of our entire lives," Lincoln Heights resident Carlton Collins says. "We need to understand that there are maybe 10,000 people who can hear these gunshots. Enough is enough."

Collins is a member of The Heights Movement, a community advocacy group seeking to boost Lincoln Heights and its residents. One specific goal of the organization — get the gun range moved and use the land to benefit Lincoln Heights.

The event also drew leaders from the Greater Cincinnati Urban League, Princeton School District and other groups to express support for the drive to relocate the range.

Daniels said that he heartily supports police training, but that keeping the gun range in the area is not an option.

"You're asking another generation of kids hearing gunshots and explosions and police yelling 'shoot, shoot' while they're trying to concentrate on school," Daniels said.

Daniels, an employee at Princeton Schools, says the sound of constant gunshots is upsetting to young people and contributes to long-lasting psychological trauma.

A change could be close.

In the past, police and City of Cincinnati administrators have been highly resistant to moving the location, though CPD officials now say they're open to relocating it if a suitable replacement site could be found.

Cincinnati City Council's Education, Innovation and Growth Committee will likely take up the issue soon. Moving the range could be on the table, but so could enclosing it — a $2.9 million project, according to city reports.

"There is a viable remote location for the gun range, and necessary relocation funds exist somewhere, so we must move with alacrity to find both,” Councilmember Kearney said yesterday in a statement.