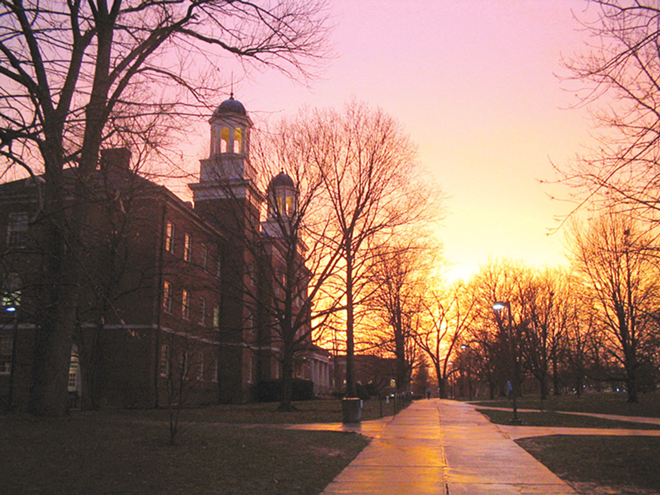 iami University has a problem with sexual assault.

But so does every other college campus in the United States. One in four female college students will be a victim of sexual assault during her academic career. By nature, there’s something about a campus that makes it a high-risk place for sexual assault — some blame it on the prevalence of alcohol and binge-drinking, the gender overlaps in close living quarters and millennials’ skewed sense of entitlement.

It’s a public health and safety issue that plagues campuses around the country, and pinpointing exactly why is a question that has yet to be answered. But one lawsuit recently filed against Miami University is raising concerns about how universities should be held accountable for sexual assault and whether or not there’s a systemic failure that could extend far beyond Oxford in college administrations’ attitudes toward sexual assault prevention and response.

Antonio Charles looks to have been a rather typical Miami University student. During his student tenure there, he was a member in the school’s music performance department. His resume on a number of personal networking sites boasts a hefty history of operatic success, accented by a series of accolades and a demonstrated interest in public service.

Innocuous as he may appear, he’s also the catalyst that led a female MU student, whose name CityBeat is withholding, to charge her alma mater with negligence and a breach of the student code of conduct, which has yet again brought the university into the spotlight because of its issues with campus safety and sexual assault. The female student alleges that Charles raped her in 2011, and she’s suing the school over red flags she says should have resulted in both criminal prosecution and expulsion from the school long before the 2011 rape allegedly took place. Charles was officially kicked out of school for “sexual misconduct” in response to the incident involving her, but he had also previously been investigated on multiple instances by Miami University police and Oxford police for lewd sexual behavior in the years leading up to his supposed 2011 offense but was not kicked out of school.

In September 2009, Charles’ fraternity brothers reported him to the Oxford Police Department for criminal voyeurism, noting Charles had shown them videos of his sexual encounters with several women, boasting he’d taped the females surreptitiously. The Oxford Police Department worked directly with the Miami University Police Department on a forensic investigation in Charles’ dorm room at that time, says the lawsuit, when investigators confiscated alcohol from the underage student’s room and found recorded videos in sync with the testimony from a woman who was informed by one of the fraternity brothers she’d been one of several women unknowingly videotaped.

Miami University Police records also show that another woman had also reported being sexually assaulted by Charles in 2008, although she didn’t pursue disciplinary action after initially reporting the incident to university personnel.

Even combined, however, those allegations evidently weren’t enough to dismiss Charles or even pursue any kind of disciplinary action. Charles wasn’t dismissed until December 2011, according to Miami University’s Office of the Registrar, after the plaintiff and the Oxford Police Department made Miami administration aware of the latest allegations against him.

In a January 2012 letter from Miami University President David Hodge to the plaintiff’s father, Hodge defended the university’s non-prosecution for the 2009 incident,

saying the investigators hadn’t found evidence that the recordings were nonconsensual beyond a “reasonable doubt.” But the video of the woman who helped file the complaint against Charles couldn’t be retrieved — or at least identified — so her testimony was essentially deemed invalid.

“While a person might suspect the recordings were not consensual, the law and our policies require that there be credible and reliable evidence that a crime or violation of the Code of Student Conduct has been committed before we can impose sanctions,” reads Hodge’s letter.

The 2011 alleged rape victim’s father engaged in extensive communications with MU personnel and Hodge prior to filing charges against the university, expressing that he found it “unconscionable” that the administration would have allowed Charles to remain on campus.

“There is no additional investigation that can be taken against him by the University,” reads a January 2013 letter from President Hodge to the plaintiff’s father. “I do want to assure you, that if we are contacted by other universities where Mr. Charles seeks to enroll, the University will inform them that Mr. Charles was found responsible for violating Miami University’s Code of Conduct, Section 103A, Sexual Misconduct or Assault and was permanently dismissed from the University.”

The Oxford Police Department’s investigation on Charles from the 2011 incident is still pending, according to police reports. He has not yet officially been charged with a crime.

This isn’t the first time the university has been accused of poorly maintaining an atmosphere of safety for its students.

In 2012, a resident assistant in one of MU’s freshman dorms found the now-infamous “Top Ten Ways to Get Away with Rape” flier, which propelled the university to launch a police investigation in search of the flier’s author. Although the student charged with creating the flier was expelled, the incident berthed ample criticism against university administration for failing to properly publicize the event.

The rape flier incident also brought to light criticism that Miami University’s Sexual Assault Response Coordinator position had been vacant for approximately a year. In late April 2013, more than seven months after the flier became the subject of national ire, the university hired Rebecca Getson to fill the position.

“Sexual assault is one of the most under-reported crimes,” she told CityBeat this week. “So if we don’t get something reported, if we aren’t aware of something happening, we’re kind of limited in that ability, because if we don’t know that it’s going on, there’s nothing we can kind of go out and do about it, until we find out about it.”

The Center for Public Integrity conducted a nationwide project in 2010 that concluded “students found ‘responsible’ for sexual assaults on campus often face little or no punishment from school judicial systems, while their victims’ lives are frequently turned upside down,” according to the project findings’ overview. The project, which included a series of investigative pieces exploring assault on college campuses across the country, demonstrated that judicial proceedings for instances of college sexual assault were often mired in bureaucracy and confusion and sometimes shrouded in secrecy.

That’s a shortcoming MU seems positively unwilling to admit, even if it is not the only offender. Getson’s answers to questions about potentially misguided tactics and policies for dealing with sexual assault victims and attackers are generally obtuse, more toeing the company line than offering options for turning things around.

Getson lauded the university for recently updating its policy regarding sexual assault by including clauses to address domestic violence, stalking and dating violence, which weren’t formally included in the university’s definition of sexual assault prior to the change. Those changes, which arose from policy expansion mandates in the Violence Against Women Act that Congress passed last fall, won’t formally go into effect until March 2014.

Only the initial complaint has been filed with the Butler County Court of Common pleas. The suit has yet to be assigned a court date. ©