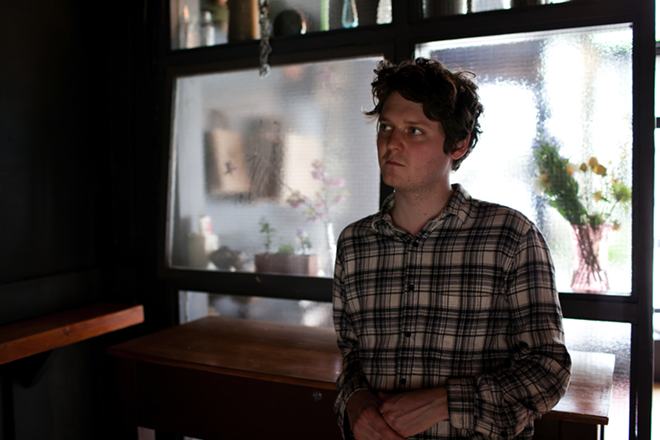 A great concert can transform a venue and transport an audience to its own little world. Last night at Bogart's, Zach Condon and his very successful Indie-meets-World-music ensemble Beirut did both in front of a wildly appreciative, sold-out crowd. —-

The band is on the road supporting its stellar sophomore full-length, The Rip Tide, another slab of gorgeous, cinematic Indie Pop with a global twist. What Beirut does musically is creative and entrancing, but, ultimately, based on a simple, long-running musical tradition of combining musical traditions to come up with a singular sound. In Beirut's case, they borrow Eastern European rhythms and Mariachi horns to create a lush, exotic, brass-heavy soundscape, over which Condon floats his swoony croon.

The concept of simplicity turned into something dramatic and ambrosial was evident in Beirut's stage set-up. With a handful of bright, rotating lights behind them (choreographed tastefully — no nonsensical dance-club pyrotechnics or anything like that) and five strands of Christmas-like lights that expanded over the front quarter of the crowd, Bogart's was no longer its "old German beer hall" self. With just five strings of lights, Beirut made the longtime local club feel like an intimate courtyard in some tiny Mexican village, where all the locals have come together to bond over music and dancing.

Of course, it was more than just the lights. Beirut's alluring, evocative music — like a way chilled-out Calexico, El Mariachi Bronx and Gogol Bordello collaboration with a less melodramatic Morrissey on the mic — was the ultimate mood-setter, filling the air with luxuriant atmospherics. Brass instruments dominated on stage, as members switched off between trombone, french horn, tuba and lots of trumpets, augmented by a sturdy rhythm section (electric/stand-up bass and drum kit), accordion and piano. Besides singing, Condon also handled ukulele duties and often joined in on trumpet with the rest of the shapeshifting horn section.

I've been to several sold-out shows at Bogart's over the years and they are often uncomfortable (at best) or miserable (at worst) experiences, with people crammed in shoulder-to-shoulder. Maybe it was the mellow music or Beirut's respectful fanbase, but this was most definitely the most comfortable sold-out Bogart's show I've ever attended.

It could have had something to do with the venue itself — after years of developing a reputation for being very customer unfriendly, Bogart's now feels downright welcoming. The staff is remarkably friendly — gone are the days of over-aggressive bouncers and rapey pat-downs at the door (not long ago, you couldn't even have a pack of cigarettes on your person; if you did, the whole pack would be confiscated and thrown out, unless you wanted to run back to your car or stash them somewhere outside). And the sound seems to get better with every show I've seen there. It's nice to have one of Cincinnati's more storied clubs (Prince, U2 and many other mega-stars have performed at the Corryville venue over the past several decades) back from the near-dead and living up to its potential.

With its hour-plus set, Beirut gave several hundred fans a soothing, intimate night-out unlike anything they'll ever experience (it's not every day you get to witness a tuba player throwing down a wicked solo). And, unlike the old days, Bogart's did nothing to stand in the headliner's way.

Within a three-foot radius of where I was watching the show, I saw Beirut's effect on people — a stoned and/or tripping hippie couldn't contain himself, emitting a loud, from-the-gut "Whooo!" after every single song and winding up to a chugging hippie dance seemingly beyond his control; a young couple danced and kissed throughout the set, without a care in the world; and everyone else had their eyes on the stage, their ears in the music and huge smiles across their faces. Again, seemingly beyond their control.

My Night with the Prostitute from Marseille