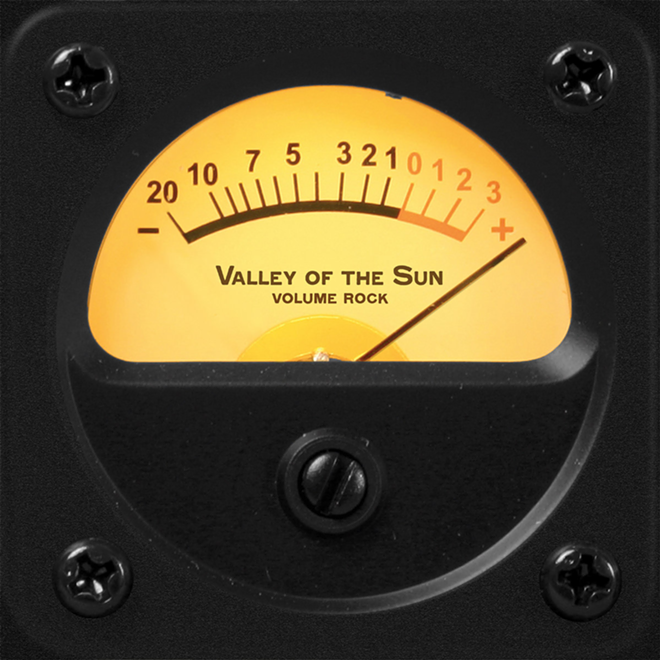 There are times in some bands’ careers when, in order to take the next step forward, it first has to take a step back.

That is what has occurred with Cincinnati-based desert-rockers Valley of the Sun between the release of 2013’s Electric Talons of the Thunderhawk and the recently-released album Volume Rock. For the new full-length (issued in late April through Swedish-based label Fuzzorama Records), the duo — guitarist/vocalist Ryan Ferrier and drummer Aaron Boyer — has toned down some of Thunderhawk’s more eclectic and intricate tendencies in favor of bombastic and driving rhythms. This has resulted in album that has lost a little musical depth, but has gained a far greater grip on the listener’s ear.

Volume Rock establishes its tonal shift right out of the gate with a trio of absolutely monumental Rock & Roll bangers. “Eternal Forever,” “Wants and Needs” and “The Hunt” showcase the strengths that Valley has spent so much time and effort honing. Ferrier’s soaring vocals have a range and power that commands the listener’s attention, while Boyer hits his cymbals with the strength of a meteor crash, his playing drawing your attention whenever Ferrier isn’t on the mic. Weaving throughout is Ferrier’s clean and infectious guitar work, with riff layered upon riff and crafting an auditory sandwich that headbangers are sure to want of bite of. But VotS retains its deeper side on Volume Rock, with Ferrier’s lyrics carrying many of his ongoing themes of higher consciousness, personal introspection and Earth’s natural beauty. It’s just that on this go around, the lyrics are wrapped in even more hooks, making the tracks more instantly and irresistibly sing-along-worthy.

This isn’t to say that Volume Rock is simple or toned down. It’s just that the flourishes found within seem designed to be more easily replicated (and perhaps more impactful) live, and overall there is a more natural feel to the songs. Hand claps, tambourine, a 12-string guitar interlude in “Land of Fools” and other ornamentation give the album a fresh sound while still keeping the tonal theme running through the entirety of its nine tracks.

Like Thunderhawk, Volume Rock features a reworking of a track from VotS’s first EP, 2010’s five-song Two Thousand Ten. But whereas Thunderhawk’s version of “Centaur Rodeo” added different drumming parts and a few other embellishments, Volume Rock’s re-do of “I Breathe the Earth” is more heavily tweaked, bolstering the song’s strengths and mending some weaknesses, while also adding more than a minute to its original running time. The backing vocals are stronger and more dynamic, the guitar tone has more depth and the drumming sounds fuller. With “Earth,” Valley of the Sun was able to take a song that longtime fans already loved and make it even better.

While Volume Rock is undoubtedly a fast and furious LP, fans of the VotS’s more expansive work will still find plenty to love. Of special note is “Speaketh the Shaman” and album closer, “Empty Visions.” Both songs exceed the five-minute mark (not uncommon for the band), showcasing Ferrier’s guitar work by giving the licks more room to breathe. Ferrier’s vocals also expand to throat-ripping levels, and the combination of his guitar and voice swirl through the tracks like the smoke from a, uh, “cigarette,” filling your speakers with righteous Desert Rock majesty.

In many ways, Volume Rock’s name says it all. This is an album that deserves to be turned to 11. It’s the perfect accompaniment to rolled-down windows, long stretches of highway and summer heat. Valley of the Sun spent three years between releases and the musicians used the time to focus on what made the band what it is, and then pushing those qualities to the forefront. In that respect, Volume Rock is a success — while there may be less going on in each song, there’s more of the band’s essence and identity throughout the album. And that identity is too loud to be snubbed.

Valley of the Sun is currently on another extensive tour overseas promoting Volume Rock, which is available in the States on most major digital platforms (like iTunes, Amazon, Google Play and Spotify). Certain mail-order services (like Amazon and musicdirect.com) also offer the hard-copy versions on CD and vinyl. You can also stream or purchase the album at Fuzzorama’s Bandcamp site here, or by clicking one of the embedded tracks above.