Tickets for texting while driving are up, despite constraints on enforcement. 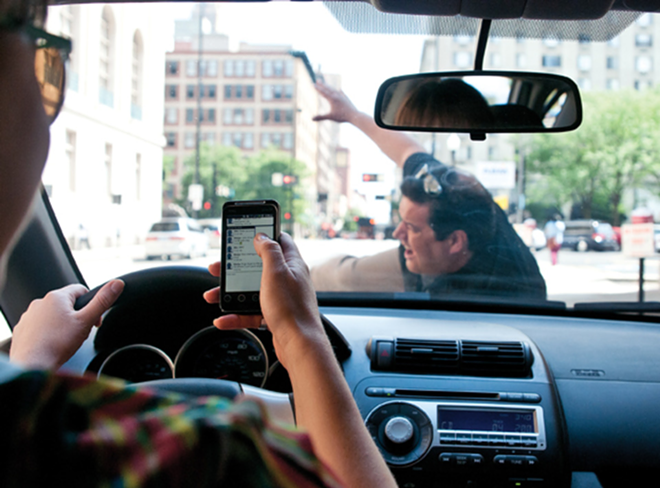 Texting while driving has been illegal in Ohio for more than four years. Yet you might not know it from what you see in your rear-view mirror or through the windows of cars alongside you. Texting behind the wheel is probably as common as smoking behind the wheel.

So people are still doing it, and more are getting caught. But the widespread complacency suggests that drivers are permitting themselves smart-phone indiscretions just as they expand the speed limit and roll through stop signs. They seem to know that the odds of getting caught are in their favor.

When the Ohio General Assembly banned vehicular texting in 2011, it oddly banned enforcement of the law to a great extent. Just look at these provisions of the law that applies to adults: No police officer can stop a driver for the sole purpose of issuing a texting ticket. No officer shall view the interior or visually inspect any automobile being operating on any street or highway for the sole purpose of determining whether a violation of that nature has been or is being committed.

With laws like that, no wonder Ohio’s adult drivers text with impunity. Only when the driver is 17 or younger can a police officer make a stop solely on the suspicion of using an electronic device.

Despite the constraints on enforcement, the number of texting tickets issued by the Ohio Highway Patrol continues to rise. In 2014, the first full year of enforcement, 314 citations were issued to adult drivers. That number grew 53 percent to 480 in 2015. Through August, citations are on pace to hit 561 in 2016, up another 17 percent. Tickets issued to teenagers are headed for a slight decline from last year’s 48.

Cincinnati passed an ordinance in 2010 that went beyond a ban on texting while driving. The city’s law forbids drivers from operating any kind of mobile communication device to trade texts or engage the internet, except in emergencies or with hands-free systems. But even in the close quarters of downtown traffic, catching the scofflaws isn’t easy.

“The challenge is that it’s tough to enforce,” says Cincinnati Police  Lt. Steve Saunders. “Were they texting or dialing a number? What are they doing? It’s pretty tough to make that call.”

Texting while driving was cited in three fatal accidents investigated by the Ohio State Highway Patrol in 2015. One of those involved the death of 25-year-old Cincinnati man in Pierce Township in Clermont County that April. The police report says texting was a factor when he drove his car across the center line on a curvy road, went into a ditch and hit a tree.

Almost every state has outlawed texting while driving, the holdouts being Arizona, Missouri, Montana and Texas. The precise harm caused by texting drivers isn’t known, but the U.S. Department of Transportation says that 3,179 people were killed and 431,000 injured in 2014 in accidents involving drivers distracted by everything from using smart phones to eating, drinking, talking, reading and watching videos.

No federal or state agency collects traffic citation data from Ohio’s cities, counties and townships. Thus, no one knows how many drivers have been cited for texting beyond those ticketed by the state Highway Patrol.

In its annual Crash Facts report, however, the Ohio Department of Public Safety shows how distracting electronic devices factor into motor vehicle accidents. Of the 78,900 Ohio wrecks with injuries in 2015, for example, 123 involved texting or emailing, 84 involved an “electronic communication device” and 594 involved “phone.” Of the 424,283 wrecks leading to property damage, 393 involving texting or emailing.

At least one organization, AAA, would like the state to take further steps to curtail texting while driving.

Cheryl Parker, a AAA spokeswoman in Cincinnati, said that AAA believes that police officers should need no other reason to pull over drivers suspected of texting. It would also like texting to be treated as a more dangerous moving violation with higher fines, not a “minor misdemeanor” with a maximum $150 fine under the current law.

Parker says more attention should be paid to the problem of adult texting and driving.

“We’ve done a good job of educating teens and emphasizing the danger of texting and driving with novice drivers,” she says. “The messages are getting to teenagers, but the assumption is that we should focus on teens when people older than 18 are doing the same thing.”