Roebling Suspension Bridge Restoration Won't be Complete Until the End of 2021, Officials Say

Deterioration of the bridge's sandstone towers is greater than anticipated. That means the bridge will need to close for nine months starting next February, Kentucky transportation officials say. 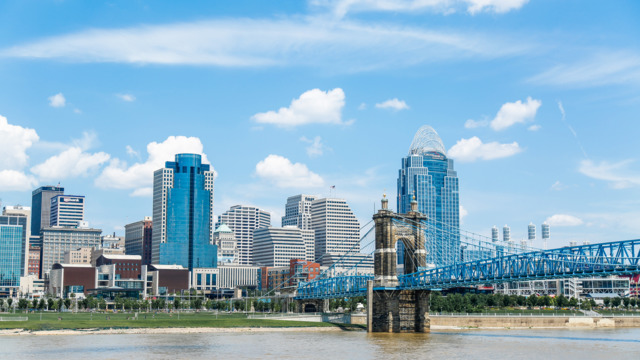 If you thought we were near the end of closures and repair work on Greater Cincinnati's iconic John A. Roebling Suspension Bridge, you're going to have to wait a little longer.

Deterioration of the 153-year-old bridge will require "more extensive" work than initially thought, Kentucky Transportation Department District 6 Chief Engineer Bob Yeager said at a business luncheon in Covington yesterday. That means repair work and closures could stretch until the end of next year.

The Kentucky Transportation Department will open a bidding process in June for the roughly $9 million project. Initial work could begin later this summer. The first steps of the process wouldn't require bridge closures, but work on the structure's sandstone towers slated to begin in February 2021 and end about nine months later would mean the span would have to close to automotive traffic. It would remain open to pedestrians during that time, however.

Falling chunks of sandstone forced the bridge to close to cars last April. It reopened in August after the installation of protective netting around deteriorating portions of the bridge's upper towers.

Some businesses near the bridge have expressed concern about the closures.

"It's going to have a negative impact to not have the Roebling Bridge," Keystone Bar and Grill representative Dan Cronican said at the Covington Business Council meeting, Channel 5 reports. "When that's not available, it definitely has an impact on the businesses."