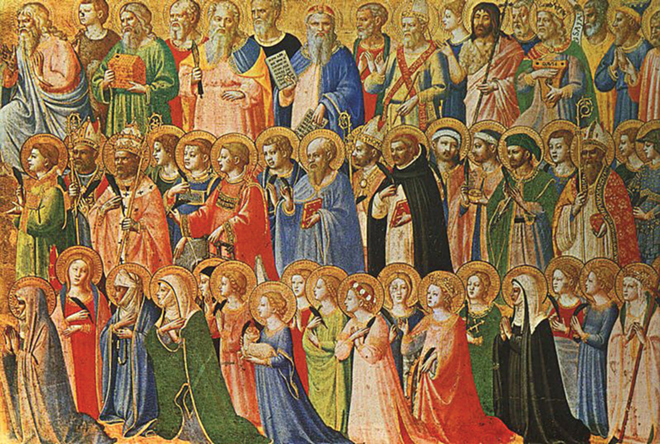 Children have a natural affinity for Halloween. It’s no wonder. It’s the only holiday that frankly and honestly addresses the fear that is always a lurking presence in the psyche of children; the fear of being eaten, chased or grabbed plays a role in many children’s games and stories. No single holiday confronts this inborn weirdness quite as well as All Hallows’ Eve. And that’s probably why children tend to glom on to the ancient roots of the holiday. It’s dark, mysterious and primordial.

The business of getting back to the roots of Halloween can be a fun, creative time for families to spend together, too. Here are a few ideas to get you going that don’t involve candy or store-bought plastic masks. If you like one of the ideas below, there’s much more to find on it at your public library. Then you can make your own historic Halloween-related mischief and party like it’s 1896 or 1599. All the books referenced are available at the Public Library of Cincinnati and Hamilton County.

This, arguably, is where it all started. The old Gaelic festival celebrated the culmination of the harvest and the move into the dark, cold winter months. This time — Oct. 31-Nov. 1 — was believed to be one during which spirits could pass more easily into the physical world. There were bonfires lit to brighten the shorter days and Celts would walk between bonfires to cleanse themselves of evil spirits that might have hitched their presence to the living. Masks were worn not to scare the living, but to befuddle meddling ghosts. The idea was that if the spirits couldn’t recognize a person, they couldn’t direct their ire toward him. And the door-to-door “trick-or-treating” bit was a 19th-century Irish custom during which a group would make the neighborhood rounds trying to scare up food donations for the Samhain feast. The more you gave, the greater your spiritual reward, it was said. There’s a lot of this historic holiday that’s made its way into the 21st century and can be reenacted around the home.

: Celebrating the Seasons of Life: Samhain to Ostara

The Triduum of All Hallows: All Hallows’ Eve, All Saints Day and All Souls Day

The Triduum of All Hallows, also known as Hallowmas, represents the time in the Christian calendar between Oct. 3 and Nov. 2. It is a time to remember the dead, including martyrs, saints (those hallowed) and the rest of the faithful departed.

All Hallows’ Eve is thought to be a sort of Christianized version of holidays like Samhain, when the veil between the afterlife and living world thins.

All Saints Day is Nov. 1 — the day following All Hallows’ Eve. All Saints celebrates the Christians who have successfully made it to heaven after death.

Nov. 2 recognizes the rest of us, those who are going to do some time in purgatory before reaching the pearly gates, with All Souls Day. The idea with All Souls is that there is a bridge made on this day between the suffering dead in purgatory, the triumphant dead in heaven and those still in the fray here on Earth.

The Haunted History of Halloween


This is the Latin American take on All Saints Day with roots in Catholicism and ancient Aztec traditions. The Nov. 1 holiday celebrates the dearly departed with a street parade of skull-faced living. Their destination is the graveyard, to which their ancestor’s favorite food and drink is brought and placed on the grave. The idea is that the spirits eat and drink the spiritual essence and the living consume the material part. Marigolds form a golden doorway around the grave to help the descendent know where to enter the physical world. Photos of the deceased, painted sugar skulls and skeletal models of the dead doing their favorite things are set up on altars to their memory. A skeleton playing a trombone, sitting at a teacher’s desk or using a sewing machine would be common examples of items that might be on an altar. The main idea is to share the fruits of the harvest with the ancestors. 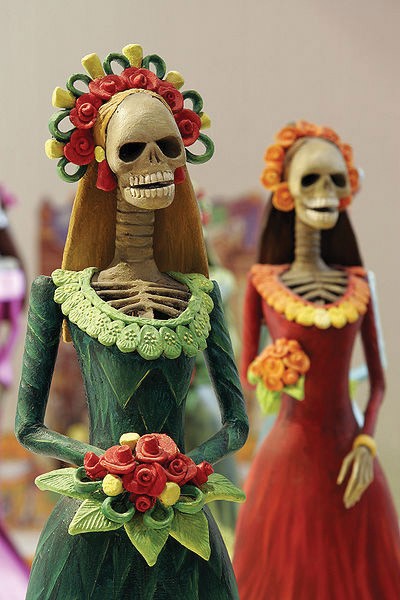 : Day of the Dead: A Celebration of Life and Death