Jones most recently grabbed attention for a March 30 letter he sent asking Trump to send federal ICE agents to Butler County to round up undocumented immigrants at businesses that employ them. 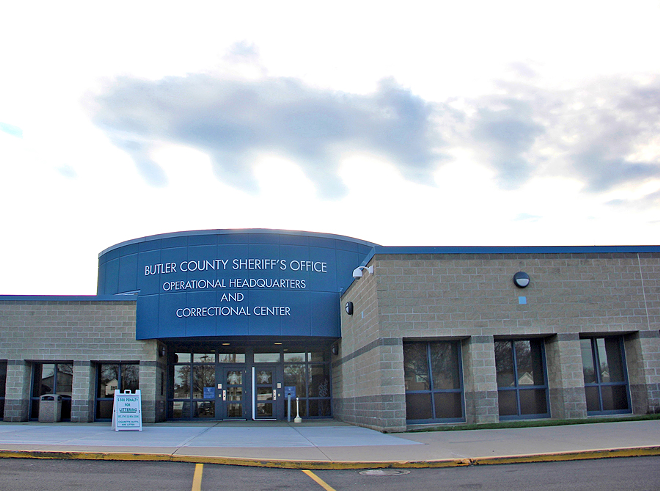 After all, their county is also home to Sheriff Richard “Rick” Jones, a staunch Trump supporter known nationally for his desire to deport undocumented immigrants.

The sheriff may be as much about bluster as he is about busting immigrants, but his rhetoric and his policies have created an atmosphere of fear in the county just north of self-described sanctuary city Cincinnati.

Jones most recently grabbed attention for a March 30 letter he sent asking Trump to send federal Immigration and Customs Enforcement agents to Butler County to round up undocumented immigrants at businesses that employ them.

“Come to Butler County, sit with me and let’s devise a plan,” Jones implores Trump in the letter.

It’s not his first time raising eyebrows. Jones once sent a $900,000 bill to the Mexican government for what Butler County has paid to help ICE detain undocumented immigrants. It earned him a spot on a Mexican drug cartel hit list, but didn’t yield any cash for the county.

“He says outrageous things, very stupid things, politically to just to sell himself,” says Cincinnati immigration attorney Deifilia Diaz of the Valencia & Diaz lawfirm. “I don’t think he puts these things into practice.”

Diaz has taken many cases from Butler County over the previous decade because Jones runs the Butler County Correction Complex, which has a partnership with ICE to detain undocumented immigrants arrested in Ohio.

The federal government has paid more than $8 million in taxpayer money since 2012 to detain undocumented immigrants there, according to the county. Currently, about 150 reside at the jail, including at least one woman from China who has been there for two years, local media reports. Last month alone, the jail detained almost 70 undocumented people. The number of detainees seems to be rising — in February 2015, just 23 were brought into the justice center, according to data from the sheriff.

But thus far, Diaz says Jones and the ICE agents he works with in Butler County have not amplified their enforcement of federal immigration law as Trump promised during his presidential campaign.

“If you are trying to see whether the Trump administration has exponentially detained undocumented immigrants in Butler County, we have not seen that,” Diaz says. “Just a little bit more, not exponentially as you might think.”

Diaz’s law firm recently reached out to the local ICE Cincinnati field office, trying to gauge the level of enforcement regional ICE agents may or may not unleash.

“They told us they do not have guidelines as of yet for mass arrests,” she says. “They are arresting fugitives who have been deported before and have come back illegally and those with a criminal background. From what we know, they (local ICE agents) are not arresting non-criminals.”

Sometimes, Jones’ words are followed up with action. In 2007, nearly 300 ICE agents, with help from Jones, raided Koch Foods Inc., a chicken processing plant in the city of Fairfield, and arrested 160 undocumented employees.

Jones is rumbling loudly about illegal immigrants once again, and if he gets his way, non-criminal undocumented immigrants and those who employ them could face raids by the sheriff’s department.

Jones recently told the Dayton Daily News he wants to reinstate a program that will allow ICE to train his officers so they can investigate local companies suspected of employing undocumented immigrants — a call he repeated in his letter to President Trump.

Jones has said his officers don’t question Butler County residents about their immigration status. But some residents say that’s not true.

“They see you are Hispanic and stop you, find something to put you in jail, to make you guilty for something,” Butler County resident Maria Rodriguez told Al Jazeera in 2015 about sheriff’s deputies. “If you are driving, the police will stop you and ask you for your documentation.”

Being racially profiled by law enforcement is “normal for us,” says one Hispanic business owner of this tight-knit community who asked not to be identified.

Jones does sometimes have sympathy for undocumented immigrants, Diaz says. Her firm has asked Jones’ office to approve and sign U Visa applications, which are set aside for undocumented immigrants who are victims of serious crimes and have to come forward to law enforcement for protection even though it could mean being deported. The office has never said no, she says.

But there’s another, harsher reality in Butler County as well, critics say.

The jail Jones oversees has held an undocumented Chinese immigrant for the last two years, according to a recent report by WCPO. ICE has kept Li Li Chen in Butler County’s justice center — though she has no other criminal charges against her — as she fights in court to stay in the U.S. She entered the country via California with a fake passport in 2004, when she was 17, and, after multiple deportation orders and appeals, waits in Butler County, separated from her husband and two children.

The jail also has a harsh solitary confinement policy for undocumented immigrants, according to a 2014 report by the John Marshall Law School in Chicago and its International Human Rights Clinic. In a nationwide study of more than 200 ICE detention facilities, the Butler County jail was one of three they believed used solitary confinement for punishment. The report stated one detainee was placed in solitary for 30 days for playing cards during church services.

In media reports following the study’s release, Jones and his department denied the findings.

Sarah Dávila-Ruhaak, director of the International Human Rights Clinic and author of the study, says it was the jail’s own documents, after she filed for them through public records requests, that showed they were using solitary confinement as a punishment.

“The sheriff was outraged we reported that,” Dávila-Ruhaak says. “It’s not uncommon that when human rights organizations report on such things that there is a denial or different narrative they want to deliver.”

Whether or not Jones and Butler County officials engage in those practices, fear remains among the county’s Hispanic community.

Just two miles from Jones’ ICE jail is St. Julie Billiart Catholic Church. At the church’s Sunday 1 p.m. Spanish service, the pews are jammed with more than 400 immigrants, some undocumented.

The church’s pastor, Father Michael Pucke, says “without a doubt” his congregation’s deportation anxiety of late is palpable. That’s why the only document he asks for is a baptism certificate, he says.

He has visited the ICE jail weekly for nearly a decade, seeing his own detained parishioners and others whose families call him from across the state. The greatest concern he has about the immigration debate is the rhetoric being used.

“It has the potential to stir up anti-immigrant feelings, whether that be in a school setting or through social media. People are hearing this rhetoric day in, day out,” he says. “First of all, I believe all people have the right to find a dignified life in their own country. Secondly, if that is impossible, they have a right to go look for what they need to have a dignified life.” ©