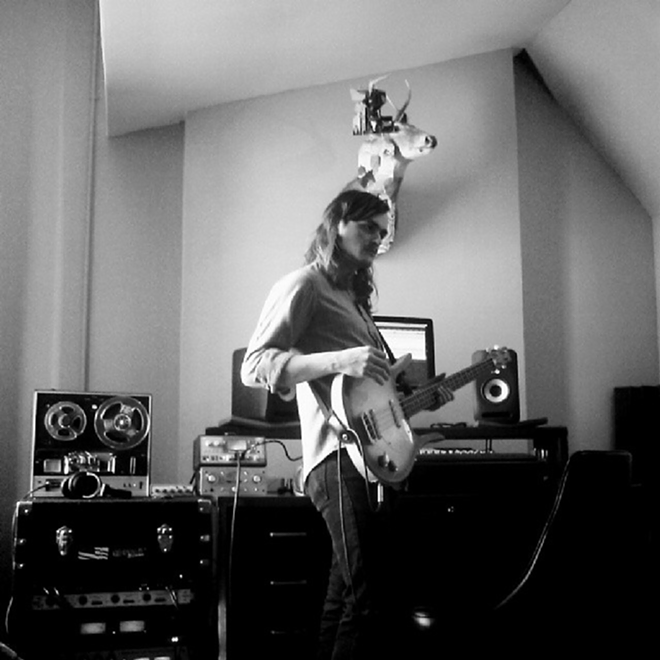 Guitarist Coleman Williams can barely see through his overgrown hair as he leans over a 12-string guitar while he strums out “You Knew This Was Coming” for local electronic act Dark Colour’s upcoming Animal EP. The song is the last to be complete after two days of recording in Over-the-Rhine’s Sabbath Recording. Williams lays down the finishing touches.

Although he can’t seem to play the chords right on his first try while the sound engineer, Isaac Karns of the Pomegranates, records him, the chords suddenly come flawlessly from Williams’ fingertips as he practices before the next take. “Cole is like an endangered species,” Karns says. “He plays this amazing stuff when you’re not recording and then you’re like, ‘No! Do it again!’ ”

For Sabbath Recording, late-night music means polishing tunes with intricate details that dramatically transform songs, such as the 12-string guitar that helped turn the aggressive, almost chaotic “You Knew This Was Coming” into a more Poppy dance track reminiscent of Depeche Mode.

Jacob Merritt, also of the Pomegranates, came up with the idea for Sabbath when he discovered a love for recording while in college about 10 years ago. Though his interest in recording was put on hold while the band took off, Merritt began investing in instruments and gear for a studio and started hunting for the perfect space when things began to wind down.

Merritt and Karns hope that any artist who walks through their doors leaves with a more defined or reinvigorated purpose for their music. The idea is for the artists to feel refreshed and energized about who they are and what they are doing.

“If you work from that place, I think the other things are likely to fall into place sonically or musically,” Karns says.

Merritt says he tries to make artists very comfortable and eliminate any awkwardness from working with someone new. At Sabbath, the day always begins with time to ask questions, read from a thought-provoking book and have meaningful conversation meant to open the artists up.

“Bands consistently comment on how much more connected they feel with their bandmates,” Merritt says. “If you aren't communicating as best you can, you might be missing out on your best creative work. I really love seeing musicians grow as songwriters and thinkers during their time at the studio.”

The goals of Sabbath Recording are just like the name suggests — it is a place where artists can take time to rest, disconnecting from the stresses of everyday life in order to focus on something they enjoy. To symbolize this, artists leave their shoes at the door as they walk into the studio designed to be a place of healing.

“Before starting, I always ask the artist if they love the songs, or their voice, or instrument or whatever we will be working on that day and have them respond,” Karns says. “It's small, but sometimes just saying aloud, ‘Yes, I love my voice,’ can be a great way to internally prepare for the day.”

The intimate, uplifting recording sessions are what make Sabbath unique among other studios and opportunities for musicians in Cincinnati. The team’s dedication to giving every artist the best experience possible is evident in even the small things they do, from strategically structuring sessions to keeping the studio stocked with drinks and a snack pile so artists don’t have to leave in search of nourishment.

“Jacob and Isaac put their hand in the creative direction of the music because they feel so involved with the projects they bring in there,” says Dark Colour vocalist Randall Rigdon. “Their connection with the artists set them apart from other studios, where engineers can tend to act more exclusively as technicians.”

In the two years that the studio has been open, artists from all over the country have checked in. Merritt says they are open to working with anyone — and taking the time before and during sessions to really understand who they are working with.

While Karns is currently putting the finishing touches on Dark Colour’s Animal, which will be released with the Montreal-based label Kitabu Records this spring, he is also excited to finish up the quirky, trippy lounge-Punk debut album from S.R Woodward. Karns is also developing a narrative-driven, collaborative experimental podcast project.

The team’s former bandmate from the Pomegranates Joey Cook will also check into Sabbath to work on his fever-dream-Psych-Disco record, which Merritt says “will be an odyssey.”