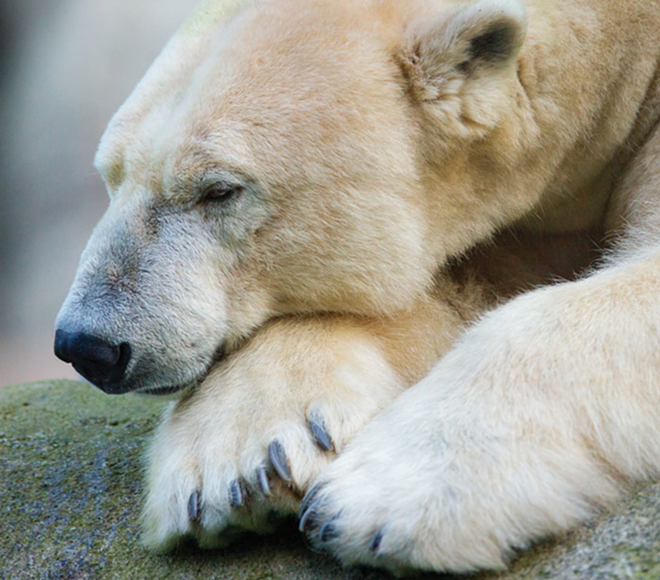 The humble beginnings of the Cincinnati Zoo’s Conservation and Research of Endangered Wildlife team, or CREW, go back to a little lab in a closet within the zoo’s elephant house in 1981. Now operating out of a state-of-the-art facility, the group of researchers and scientists have been combining cutting-edge technology with heartfelt devotion and a focus on animal reproduction to provide a future for species in trouble ever since.

CREW channels a majority of its expertise and funding into a few select major programs where it can make a real impact on a particular species. They currently have four “Signature Projects”: rhinos, small cats, endangered plants and, their newest addition, polar bears.

Dr. Terri Roth has been the director of CREW since 1996 and has had a huge influence on the groundbreaking conservation of the Sumatran rhino, one of the most endangered animals on earth (only around 100 exist in the wild). The zoo’s goal has been to keep the rhino population safe in the wild while establishing a successful captive breeding program. In 2001, its efforts helped breed the first Sumatran rhino calf born and bred in captivity since 1889. It has birthed two more since and used its research (and calf) to assist with the birth of a fourth rhino at the Sumatran Rhino Sanctuary in Indonesia in 2012.

The rhino project is internationally recognized by experts, so while it clearly stands out as one of CREW’s biggest successes, Roth says high-tech progress as been made with small cats as well. The team managed to breed ocelot kittens at the Cincinnati Zoo using assisted reproduction and artificial insemination, and used that information to assist with breeding efforts in other North American zoos and in the cat’s native Brazil, resulting in 15 births to date.

The team has also been working on producing an easy pregnancy test for polar bears both in captivity and in the wild, as well as ways to monitor female polar bear hormones and figure out causes of reproductive failure in captive bears.

CREW’s achievements mainly bank on its cryopreservation research. The CryoBioBank contains thousands of genetic samples from 75 animal species and a “frozen garden” of more than 125 different plant samples. CREW can rescue and store genes to produce offspring from animals that didn’t reproduce naturally in their lifetime, assisting broader efforts of saving species from extinction and also providing genetic diversity in endangered populations. It also serves as an alternative to transporting live animals and plants between zoos and countries — rhino sperm from the CryoBioBank is regularly on the road to different zoos for artificial insemination, hopefully resulting in the birth of more rhinos.