Suicide Rate Up By 24 Percent in Ohio, New Study Finds

The study considered suicide rates county by county between 2008 and 2017. Most of the counties with the highest rates are in Ohio's Appalachian region. 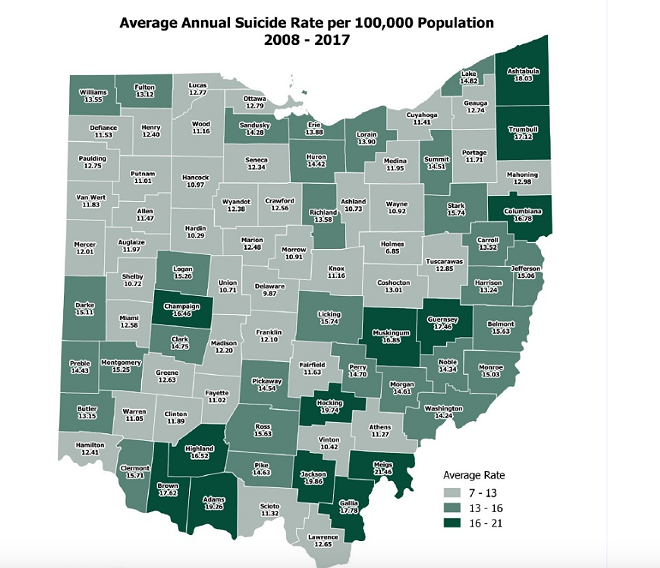 Ohio Alliance for Innovation in Popular Health
Suicide rates by county, according to Ohio University study

A new report released Monday suggests that Ohio's suicide rate has grown significantly over the past decade.

The study by Ohio University's Ohio Alliance for Innovation in Population Health found that from 2008 to 2017, Ohio suicides increased by 24 percent.

Overall, 15,246 people killed themselves, accounting for a little more than 1 percent of deaths statewide. In Hamilton County alone there were 996 suicides in that time frame.

Orman Hall, the study's author, told the Akron Beacon Journal that by breaking down the report by demographics and geography, limited state resources could be directed toward those found to be most at risk.

According to the study, those most at risk are males, especially those between the ages of 50-59. Suicides rose 57 percent among this age group. Young males between 20 and 29 also saw suicides increase by 36 percent.

These numbers build on another report released last year by the Center for Disease Control.

Statewide, guns account for more than 50 percent of all suicides.

You can find the full report here.

A version of this story was originally published in our sister paper, the Cleveland Scene.