If you tell someone Cincinnati’s identity is connected to water, they’ll probably assume you’re talking about the Ohio River. Yes, there is that. But it’s also about the role of outdoor public fountains in the city's history and recent resurgence. f you tell someone Cincinnati’s identity is connected to water, they’ll probably assume you’re talking about the Ohio River. Yes, there is that. But it’s also about the role of outdoor public fountains in the city’s history and recent resurgence.

The bronze Tyler Davidson Fountain (Fountain Square, Fifth and Vine streets, Downtown) — also known as the Genius of Water — has been the centerpiece of Downtown since gifted by Henry Probasco in 1871, even as the buildings around its Fountain Square home radically changed. Recent renovations have tended to diminish the role of the fountain itself as the sole reason for the Square to exist, but whenever the wind is right and its spray soars out into the plaza and onto visitors, it reasserts itself as the king — or queen — of its domain. 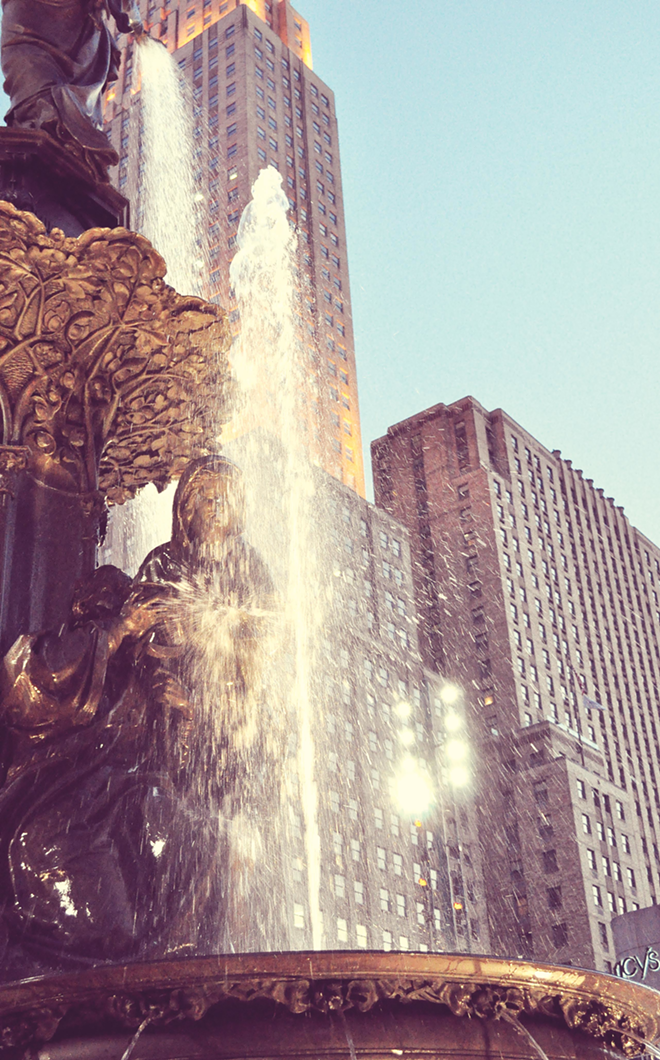 Moving just a few blocks north, Over-the-Rhine’s turnaround has been symbolized by the crowds packing Washington Park (1230 Elm St., Over-the-Rhine) since its $46 million redesign in 2012. If there is a key exciting component to this “new” park, it is the 7,000-square-foot interactive water feature with its 130 pop-up jets designed by BHDP/Human Nature. Because of its central location in the park, it is far more than a recreational “sprayground” for children. It is a refreshing tourist attraction for adults, a 21st century Genius of Water.

So with these two in mind, CityBeat compiled a list of Greater Cincinnati’s “Top 10” most appealing fountains. There are far more fountains than can be included in any single compact list, of course. The following is the rest of the 10 best — the remaining eight — in no special order.

After Tyler Davidson, the fountain in front of Union Terminal/Cincinnati Museum Center (1301 Western Ave., Queensgate) probably is the city’s most-photographed. With its clamshell sprays and its boldly curved sections that cascade from the top section to a lower pool, it nicely complements the beautifully stylized Art Deco building itself. Overall, the elaborately shaped fountain looks dreamed up by choreographer Busby Berkeley — only a million-dollar mermaid is missing. The evening illumination is so soft, much of it coming from pedestal lights, that it strikes the water like shimmering moonlight. 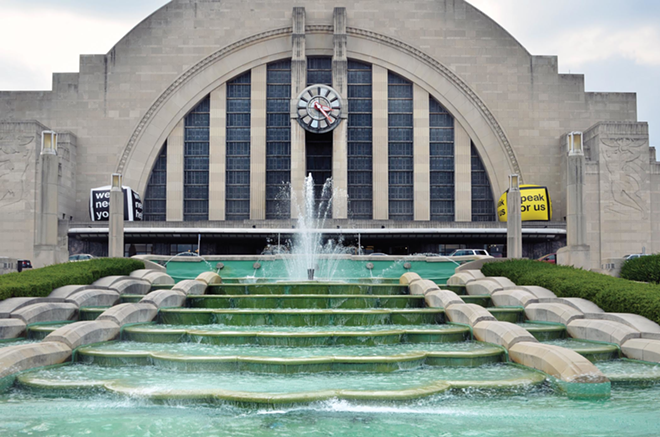 The fountain was built to replace the large pond destroyed by Union Terminal construction in 1933. So it is large, holding 3,200 gallons of water. According to the Cincinnati Museum Center, kids at one time played in the fountain’s lower pool.

If you want a fountain whose shape and subject matter directly relate to its location, there’s no better example than the Amelia Valerio Weinberg Memorial Fountain (800 Vine St., Downtown) on the Main Library’s Vine Street Plaza. It’s also known as the “book fountain” because sculptor Michael Frasca, a founder of Spring Street Pottery, made an enticing series of oversized ceramic-tile books to accompany the gentle waters. It works as symbolism — the “free flow” of information and the “thirst for knowledge” — but it primarily works as an appealing sight in its own right. The piece, a result of Weinberg’s bequest, dates to 1990. Not far from Fountain Square is the Federal Reserve Bank Plaza (Fifth and Main streets, Downtown), tucked into a quiet space just across from busy Government Square. Open 8 a.m.-5 p.m. Monday through Friday from May through October, its main attraction is the water sculpture by the late California artist Oliver Andrews, which dates to 1972. Emerging out from a rectangular reflecting pool are two abstract stainless steel pieces, one tall and vertical and one flattened and narrow like a stylized submarine tail. One can admire its formalist, unadorned quest for the cleansing purity of Minimalism — a great concern on artists of that era that still resonates today.

Smale Riverfront Park’s (The Banks, West Mehring Way, Downtown) water features are designed to dazzle, especially at night. Like the “new” Washington Park, Smale debuted in 2012. The water elements were designed by Sasaki Associates (of Watertown, Mass., appropriately) to create a flow of movement from the elevated city toward the Ohio River below. Thus, they serve as pedestrian bridges — albeit wet ones.

At the end of Walnut Street is the Grand Stairway, flanked by adjoining fountains and pools that are bathed in colored lights. At the bottom of the stairway, on its west side, the small pools branch out. It’s meant to conjure grandeur, like walking a red carpet to a glitzy Hollywood premiere.

Across Mehring Way and one block east of Walnut, opposite steps leading to Main Street, is the Fath Family Fountain. You can walk a narrow aisle between illuminated jets of shooting water (and get wet doing it), or sit on a bench to the side and just watch the play of the spray. 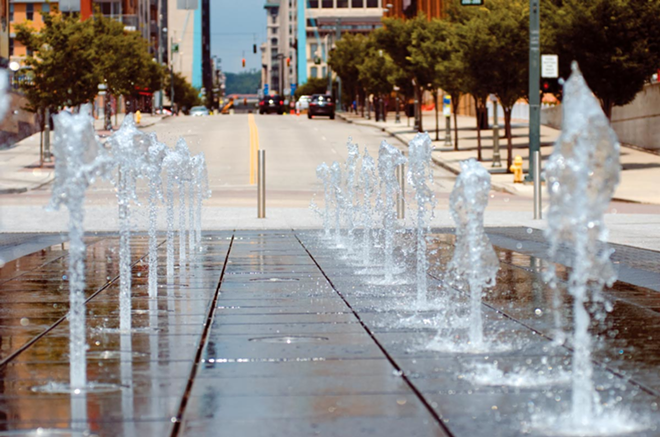 t’s with mixed feelings that I choose the Otto Armleder Memorial Aquatic Fountain at Yeatman’s Cove Park (601 E. Mehring Way, Downtown). In its first incarnation as the Concourse Fountain that opened in 1976, it was a masterpiece of interactive urban landscape architecture. Designed by Philadelphia architect Louis Sauer, who also did the more Brutalist One Lytle Place apartment tower above, it consisted of a shallow pool into which — on one side — water would shoot from an adjoining, right-angled tower (some called it a giant “shower head”).

On the other side, steps rose up from the water’s edge and were interspersed with what appeared to be mysterious concrete monoliths when you faced them (actually they were multi-sided). Water oozed and poured downward from them, and you could walk or sit in this area and get as drenched as you wanted. It was an inspiration for what cities could do to make the built environment playful.

But this free water attraction needed a lifeguard, and for economic reasons the Cincinnati Recreation Commission in 2009 filled in the pool and created a sprayground that doesn’t require supervision. The steps that provided access to the “monoliths” were fenced-off. The steep seating area behind the “shower head” is still open, but a plaza exit at the top is now padlocked, as are several other areas.

Aesthetically, the effect of this change is ugly — instead of the powder blue of the pool, you see the reddish-brown of the sprayground’s surface. But it is cooling to walk amid its jets, and Sauer’s still-operating silently hulking “monoliths” still have a wondrous quality. The “shower head” is still a thrill when its nozzles send spray at you. Cincinnati Parks Department has taken over this space as well as nearby Sawyer Point Park, so perhaps someday it can return Concourse Fountain to its original state.

Maybe the loveliest swath of small, landscaped public green space in Cincinnati is the six-acre Campus Green (Martin Luther King and Campus Green drives, Clifton Heights) on the northeast edge of University of Cincinnati’s main campus. Developed in 2000 by Hargreaves Associates as part of UC’s Master Plan, it combines mound-like hillocks and a young arboretum with walkways and benches. It now offers a fine view of the recent redesign of Morgens Residence Hall, which was transformed by being encased in a new glass “envelope.”

An important component to this environment is the modest but soothing “water stairs,” its curved contours suggesting the space for it was created by several scoops of a large garden shovel. That makes it appear planted and organic. Best of all, the area sits where once there was a parking lot. How’s that for a true Green revolution? The fountain operates 7 a.m.-6 p.m. weekdays and during special weekend events.

I’ve driven by tiny Annwood Park (1900 Madison Road, East Walnut Hills) countless times without having any idea of the secret grotto in it. Then Steven Schuckman of the Parks Department sent me a list of water features and the name Hardin Grotto caught my eye. Where was it? On a subsequent visit, I found the tucked-away grotto with its waterfall and pool just off the side street, Annwood Street. You wouldn’t know it’s there unless you already know it’s there. With greenery on both sides, it’s like a scale-model version of something you might find hiking the Blue Ridge Mountains. It makes for a nice respite in a surprisingly rustic locale.

While I haven’t prioritized the fountains on this list, I have saved my favorite for last. It’s the Cincinnati Art Museum’s Reflecting Pool in the Alice Bimel Courtyard (953 Eden Park Drive, Mount Adams). The pool is marble and just a couple inches deep. Its long, narrow rectangular form has just enough of a gap between the smooth edge and the pavement to allow the water to overflow, like a liquid curtain, into a drainage area below.

Along one side, granite benches holding potted flowers alternate with ivy-filled basins. Water continuously, mesmerizingly spurts out of demurely placed spouts inside the latter and into the pool. There are some tree-shaded tables and small geometric-shaped benches for sitting nearby, and the museum’s café offers outdoor table service with a view.

Hargreaves Associates in association with KZF designed this as part of a 2004 renovation of the museum’s interior courtyard, and it has a very ordered, Zen Garden-like feel. This is something worthy of Isamu Noguchi, or maybe Donald Judd if he tolerated a little decoration. When I visited, some young ladies remarked that they wanted badly to slip off shoes and walk in the placid water. It seems to me you could walk on it.