Theetge said "officer wellness" will be one of her top priorities as the newly-cemented chief. 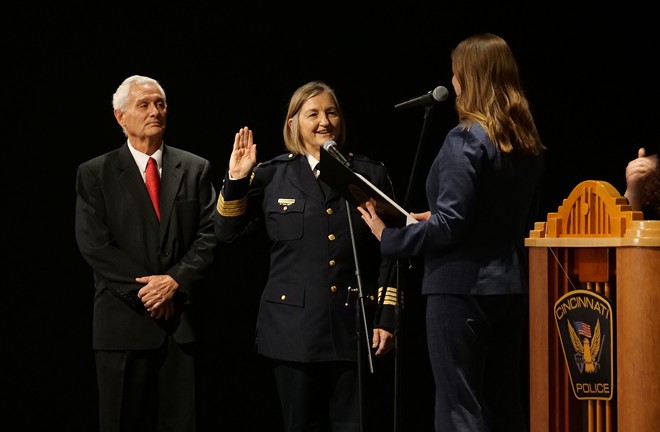 Photo: Madeline Fening
Teresa Theetge is sworn in as Cincinnati's first female police chief. She's been with the department for more than 30 years.


Teresa Theetge has officially been sworn in as Cincinnati’s newest police chief, the first woman in the city's history to hold the job.

She was sworn in as the department’s 16th chief on Jan. 9 at Union Terminal before an audience of colleagues, city leaders and more than 60 family members.

“It is a new day for public safety in Cincinnati,” said mayor Aftab Pureval during the ceremony. “In Chief Theetge, we have a barrier-breaking public servant. The first woman police chief in our city’s history. She understands the importance of pushing beyond the status-quo.”


Theetge, 60, has been with the department for more than 30 years. She was the executive assistant chief under Chief Eliot Isaac before taking over as the department’s interim police chief starting in March 2022, following Isaac's retirement.

“More than three decades ago while sitting in the police academy as a recruit, I told my fellow classmates that it was my goal to one day be the chief of police for the Cincinnati Police Department. I knew as a woman in this career, it wasn’t going to be easy and I needed to pave my own path, but I was determined,” Theetge said in her address. “Yes, I am the first, but I guarantee I won’t be the last.”

“Chief Theetge is a home-grown success story. A CPS graduate via Western Hills High School,” said Long during the ceremony. “Throughout the selection process, I was struck by her ability to connect with our community, highlight and support the Collaborative Agreement, and bring new, cutting-edge ideas to the table.”

Dan Hils, president of Cincinnati’s Fraternal Order of Police, leaked to other local media outlets on Dec. 13 that Theetge would be chosen for the job. He previously told CityBeat that officers in the FOP preferred Davis as the final selection.

During her address, Theetge said she will continue to prioritize the mental health of the city's officers as chief. 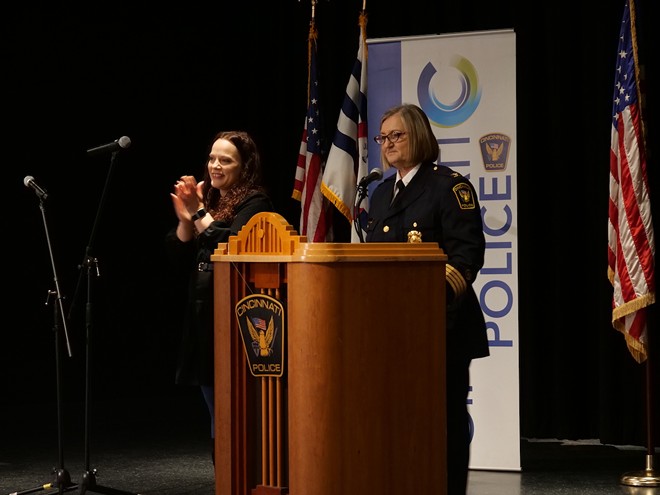 “This morning I sent a virtual message to our officers letting them know how grateful I am for their continued hard work and reiterated my trust in them and my commitment to this department,” Theetge said. “CPD has quickly become a model department for officer wellness, not just in the region, but throughout the country. As chief I will continue to make this a top priority for our organization. Focusing on officer wellness allows our officers to have a clear mind to respond to any situation they find themselves in with both empathy and composure.”

In 2022, the cases of several CPD officers who claimed stress caused them to use racist slurs while on the job came to light, prompting Long to enact a new policy that terminates the employment of those working for the city who use the n-word or other slurs.

"It doesn't go unnoticed by me or anybody on this call, I'm sure, that the police department specifically has had three instances of racial slurs being used by on-duty officers within the last six months," Theetge said when the policy was announced in October. "There's a lot of things I can defend with [what] an officer does or says, but the use of a racial slur is not one of them."

During Theetge's time as interim chief she also dealt with the Main Street shooting that injured nine and prompted a slew of controversial efforts to reduce gun violence on Main Street. Theetge was also in charge while the department faced a trend of school “swatting,” or false threats of school violence to elicit a heavy police response.