The citizens came from 43 different countries of origin and the ceremony was one of four taking place at Major League stadiums across the U.S. 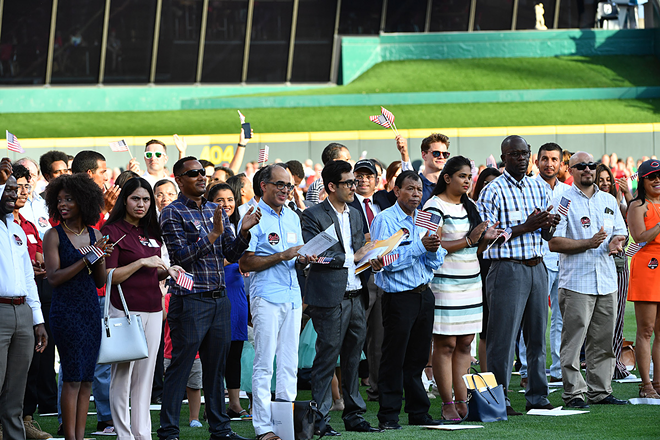 Photo: Provided by the Cincinnati Reds
The naturalization ceremony

On Aug. 16, 114 new American citizens were naturalized on the field of Great American Ball Park before the Cincinnati Reds took on the St. Louis Cardinals.

GABP is one of four Major League ballparks taking part in naturalization ceremonies held across the country to celebrate Constitution Day and Citizenship Day (Sept. 17).

Federal Magistrate Judge Stephanie Bowman presided over the naturalization ceremony, a partnership with the U.S. District Court — Southern District of Ohio, which included an Oath of Allegiance just before the singing of the National Anthem.

Photo: Provided by the Cincinnati Reds
An image from the naturalization ceremony and event at Great American Ball Park

In a video of the event, Judge Bowman can be heard saying at the ceremony, "This is an exciting time for you. You present yourself as qualified and willing to become a citizen of the United States of America... I am also aware that many of you suffered great hardships and faced tremendous challenges not only to get into the United States, but to be here today."

The new citizens came from 43 different countries of origin, according to a release from the Cincinnati Reds: