Cincinnati's latest arts criminal sports loose-fitting chinos, a white T-shirt and wire-frame glasses over wiry brown hair. His name is David Dillon, and he's done nothing wrong except work hard as an artist and the operator of Semantics Gallery, a storefront space in the city's gritty little Brighton neighborhood.

Semantics has become a second home for many local artists and a consistent showcase for quality exhibitions. It might be a roughewn space compared to the city's sleek retail galleries, but Dillon and his volunteers make sure the gallery shows are consistently worthwhile.

Semantics functions like an artist cooperative, and Dillon is always quick to emphasize the team effort. Still, everyone knows that Dillon and Semantics are one and the same. He's the go-to guy.

So when members of the Cincinnati Police vice squad shut down Semantics at the June 7 opening of its exhibition Struck by Lightning: Adventures in Time and Media, Dillon was the person cited for "unlawfully selling beer" and "unlawfully furnishing beer in 12-ounce cans." Of course, the beer was free for adult visitors at the opening and the "sale" was nothing more than a donation jar placed in the gallery as a way to cover costs.

Officers told Dillon they shut down Semantics because the opening event was promoted as a rave, which everyone knows is the top problem facing Cincinnati today.

It's not violent crime or a slumbering downtown. And it's certainly not the open-air drug market occurring daily just a few blocks east of Semantics on Central Avenue.

That open-air drug market — which officers might have driven by on their way to shutting down Semantics — doesn't seem to be a Police Department priority. No, there are cans of free beer and a donation jar to be confiscated. Raves to be shut down. A struggling artist like Dillon to be arrested.

Semantics Gallery and the nearby performance space SSNOVA are the few bright spots in a part of town too rundown for urban renewal. Dillon is a working-class hero, an inspiration to a younger generation of artists who have little interest in networking with suit-and-tie politicians and business leaders. Now he faces court time and sizable legal costs. It's a Queen City payback for a creative young person who's dedicated himself to building something up from the grass roots.

City Hall leaders unanimously agree that the city's arts organizations and the audiences they attract are fueling a much-needed renewal here. The opening of the new Contemporary Arts Center, Zaha Hadid's sleek temple of art located snugly on a half-block site in the center of downtown, has earned Cincinnati a deluge of gushing praise. Everyone likes positive publicity, especially when it comes from big-city journalists who usually regard Midwest towns like Cincinnati as the cultural equivalent of line dancing.

Everything is different thanks to the new CAC. We're hip. We're hot. Haven't you heard?

Councilman Jim Tarbell, chair of the city's Arts & Culture Committee, explains the Semantics shutdown and Dillon's arrest as a fluke, a rare mistake by a police department intent on cracking down on illegal alcohol sales. In political lingo, you can shut down a neighborhood art gallery and still be pro-art.

Meanwhile the Festival of the New, the summer-long celebration of Cincinnati's arts community, continues this weekend with its second collection of events. In fact, Struck by Lightning: Adventures in Time and Media was part of the festival's opening week calendar for June 7-8.

Yet Dillon's arrest is proof that, deep down, little about Cincinnati is different despite the new CAC and its favorable coverage. Call him the Grand Marshal of the Festival of the Same Old Shit. He's the poster boy for the disconnect between City Hall leaders who promote the arts as a means for revitalizing the city and a police force incapable of seeing the difference between a rave and a gallery opening.

Let's get those New York Times and Chicago Tribune reporters back in town. Dillon's story is one they'll definitely want to cover, too. 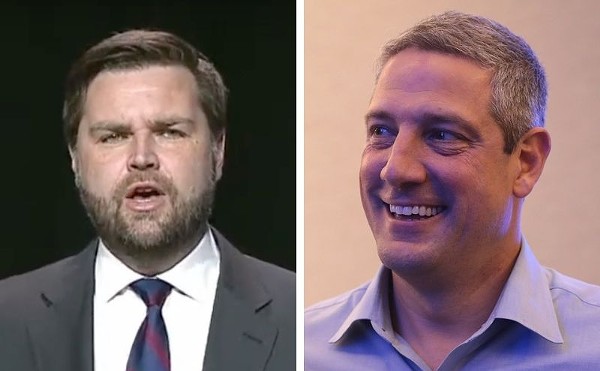