The Helicopter Is Back! 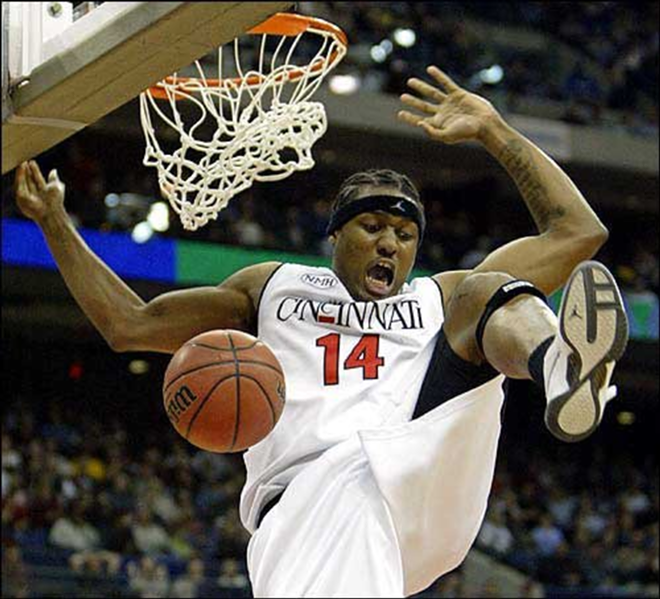 Anyone who misses the days of Eric “The Helicopter” Hicks jamming on people’s heads for the University of Cincinnati basketball team will have a chance to see Hicks suit up for another local team later this month, but this time he’ll be playing football.

Hicks signed a one-day contract to play in the Cincinnati Commandos game against the Marion Blue Racers on April 28. He’ll be in town practicing with the United Indoor Football League team during the next couple of weeks. He calls it his “OchoCinco moment.”

Although he never played in the NBA, Hicks has been a professional basketball player since leaving UC after his senior season in 2006. Hicks has been a very good player in several European leagues, having played on championship and All-Star teams in such countries as Belgium, Poland, Russia, Israel, China and Spain.

Several notable NFL players had college basketball experience, including tight ends Antonio Gates, Jimmie Graham and Rob Gronkowski. Hicks, who is 6-foot-6 and 250 pounds, hasn’t played football since his sophomore year of high school in North Carolina. Although he doesn’t expect to end up in the NFL any time soon, Commandos coach Billy Back says his size and athleticism could be real advantages in this league.

“He’s an all-time fan favorite Bearcat and one of my favorites as well,” Back said. “He’s an athlete, and we can use his height to our advantage.”

Hicks plans to return to Europe soon to resume his basketball career, but said in a release that he’s excited about playing for the Commandos.

Here’s a video showing a bunch of cool stuff Hicks did as a Bearcat.