The Judaism/Christianity Abortion Battle, Plus 9 Other Greater Cincinnati News Stories You May Have Missed This Week

Catch up on the week's big news and shockers. 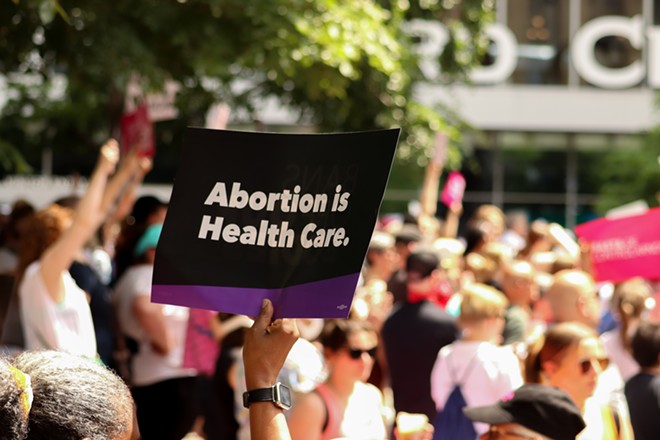 Photo: Mary LeBus
A legal battle about religious views on abortion could be brewing in Ohio and elsewhere.

It's been a banner week for attorneys in the Buckeye State, with a number of big trials hearing vital testimony and debating major legalities. Elsewhere, a Cincinnati sports ceremony might get spiced up next year, and a hip-hop legend just received an open-ended welcome to the Queen City. Catch up on the headlines below.

Jake Wagner Takes the Stand Again in Pike County Massacre Trial
Eight weeks into the trial of George Wagner IV, there is new insight into the motive behind the 2016 custody battle-turned-mass slaying of Pike County’s Rhoden family. During recent testimony, Edward “Jake” Wagner said he had “no choice” but to kill Hanna Rhoden, the mother of his 3-year-old daughter. The child was caught in a contentious custody battle between the Wagner family and the Rhoden family before the killings. Read CityBeat's story for more about Wagner and to catch up on the grisly saga.

Ohio Jewish Rabbis React to State Expert Offering 'Christian Understanding' of Abortion Law
In Preterm Cleveland v. Dave Yost, Judge Christian Jenkins heard testimony from doctors on both sides (Ohio attorney general Dave Yost is a Republican). Preterm Cleveland, a large network of Ohio abortion providers, put forth a doctor with three decades of experience working with high-risk pregnancies, while the state brought up a retired biomedical ethics professor who said he had no OB/GYN training and had never witnessed an abortion being performed. That professor's use of the phrase “Christian understanding” during trial has made rabbis feel that Ohio may be teetering on imposing a single religious viewpoint on its citizens. Read CityBeat's story about how Judaism views abortion and if more legal action is coming.

Former Cincinnati Reds Pitcher Bronson Arroyo Discusses Curveballs, Music upon Reds Hall of Fame Induction Announcement
The 2023 Reds Hall of Fame induction ceremony will feature a bit of guitar, if Bronson Arroyo has anything to say – or sing – about it. The former pitcher and current musician will be enshrined in Queen City lore forever, the hall of fame announced this week, and Arroyo plans to bust out the jams. As a Red, he pitched more than 200 innings in every season except for two of his nine Cincinnati years. Arroyo also was good for strikeouts, routinely throwing more than 120 per Reds season except for in 2017. Over his entire Reds career, Arroyo tossed 1,157 strikeouts – something just five other pitchers for the club have done. Read CityBeat's story with Arroyo's thoughts on performing at his ceremony, today's pitching game and his favorite tunes.

Ohio Supreme Court: Cedar Point, Kings Island Customers Not Owed Refunds for COVID Shutdowns
Ohio's most prominent amusement parks had every right to change admission rules during the government-mandated COVID-19 pandemic shutdown, the Ohio Supreme Court ruled this week. Cedar Fair, L.P.,  was “neither unjustly enriched nor in breach of contract” when Cedar Point in Sandusky was closed for two months, keeping 2020 season-pass holders from using their tickets. Read CityBeat's story about the lawsuit's details and how the court arrived at its decision.

Joe Biden Wants Everyone to Know He's Not Pardoning Pot Dealers
Even though cannabis reform advocates praised U.S. president Joe Biden for finally making good on his promise to expunge pot records, the president evidently wants folks to know that clemency doesn't apply to dealers. "I’m keeping my promise that no one — no one should be in jail for merely using or possessing marijuana. You can’t sell it. But if it’s just use, you’re completely free," Biden recently said. Read CityBeat's story about how Biden's weed clemency works.

Cincinnati Could Permanently Move Trick-or-Treat to Weekend Evenings
Is trick-or-treating as fun on random days as it is on Halloween? Is it safer? Those are the questions Cincinnati City Council wants to ask parents and guardians after introducing a motion that may move the annual tradition to weekends. Read CityBeat's story about why council member Liz Keating proposed the legislation.

Guest Commentary: 2022 Already Hits Record for School Shootings With Months Left to Go
As a Michigan teen pleaded guilty on Oct. 24 to killing four students in a 2021 attack, America was learning of yet another school shooting in St. Louis. "As criminologists who have built a comprehensive database to log all school shootings in the U.S., we know that deadly school gun violence in America is now a regular occurrence – with incidents only becoming more frequent and deadlier," the authors write. Read CityBeat's commentary about the steady increase of mass gun violence at schools.

Hip Hop Artist Common Gets Key to the City at Cincinnati Pops Performance
When hip hop legend and Oscar-, Emmy- and Grammy Award-winning artist Common performed with the Cincinnati Pops on Oct. 25, he may have gotten more than he expected. A video posted to social media shows Cincinnati mayor Aftab Pureval taking to the stage at Music Hall to present Common with the key to the city. Read CityBeat's story about the honor and about Common's connection to the Queen City.

FC Cincinnati Head Coach: Next Season Is 'Only Going to Get More Difficult'
The Orange and Blue hit a ton of highs during the 2022 season, including the team's first postseason berth and win plus a franchise record for consecutive scoring games. But that just means the bar is set even higher for 2023. "Now we're not surprising anybody in 2023," head coach Pat Noonan said. Read CityBeat's story about what's in store for FC Cincinnati in 2023.

Study: Despite Reds' 100-Loss Season, Cincinnati Is a Top City for Baseball
The Cincinnati Reds may not have had the best 2022 season, but the team still is a win for the city. That's the takeaway from a new WalletHub study, which has released its new ranking of the best baseball cities in the United States. In its index of fan-friendliness, the personal finance website ranks Cincinnati as the No. 7 best city for baseball overall. Read CityBeat's story about how WalletHub arrived at its ranking despite the Reds' front office frustrating fan moves with low payroll and lackluster trades.