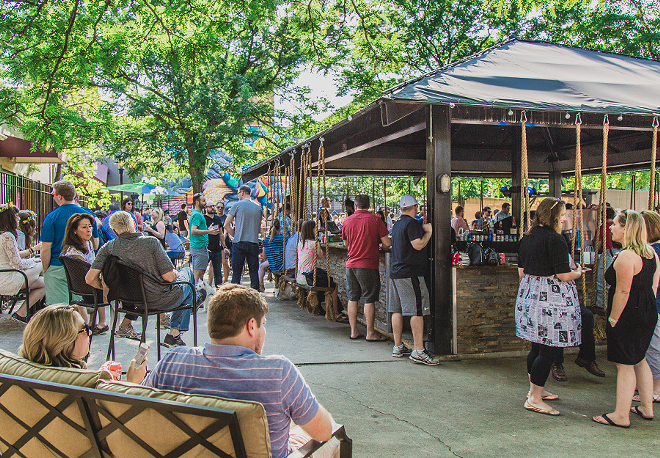 An Over-the-Rhine bar that opened last month hit a rough patch recently over alleged racial discrimination and snarky social media presence. The bar’s owners have years of experience in the local nightlife industry, along with some rocky history behind them well-known to local law enforcement.

Treehouse Patio Bar, which boasts rope swings for bar stools at its outdoor location at 1133 Sycamore St., launched May 25 to great media fanfare. The bar reportedly sold more than 5,000 cans of Rhinegeist its opening weekend and packed its 150-person capacity.

But things got messy after that. An online review of Treehouse alleged racism after patrons were denied entry, eliciting a less-than-ideal response on social media from the bar’s staff. The controversy has spurred debate over whether certain dress codes are aimed at keeping black patrons out of clubs in white parts of town or, in this case, the quickly gentrifying OTR. The criticism in turn led to some choice words on social from the bar’s staff, including replies to criticism using the word “sweetie” that many felt were condescending and sexist. Those statements were later deleted, and on June 5, the bar announced in a news release that it had fired the employee who had made the “inflammatory and disrespectful comments.”

The controversy has in turn drawn attention to the owners' backgrounds.

One bar owner, Zachary Costa, was denied a liquor license last year. And another owner who isn’t in news stories or press releases about the bar, Julian Rodgers, was the owner of the now-closed Mixx Ultra Lounge and Cameo Nightclub, the latter of which was the scene of the deadliest mass shooting in Cincinnati history earlier this year.

Rodgers owns the liquor license for the bar, according to filings with the Ohio secretary of state. Rodgers closed Cameo soon after the tragic incident. Eight of the Cameo victims filed suit against Rodgers last week in connection with the March 26 shooting.

“Our prayers go out to the families, the victims and everyone who was affected with this,” Rodgers said in the aftermath of the shooting. “We don’t set out to have anything like this happen. We’re going to do everything in our power to cooperate and make sure the monsters that did this get what they are supposed to have.”

Rodgers isn’t mentioned in the bar’s press release or in media stories about Treehouse, but Costa confirmed he’s a partner in the venture. Cincinnati Police spokesman Lt. Stephen Saunders says that’s a legal and not uncommon arrangement — one person may own the bar’s license, while others manage it as business partners and serve as the establishment’s public face.

Rodgers isn’t the only one with a controversial past.

In April 2016, the Cincinnati Police Department objected to an application Costa filed to have Mount Adams bar Longworth’s liquor license transferred into his name, city documents show. Part of that objection came from neighborhood complaints that the bar had become too loud and disorderly — a complaint Costa says existed before his time there and continued after he left.

But CPD also objected to the transfer because of Costa’s legal record, citing a recent assault charge and a vehicular homicide conviction that resulted from a hit-and-run Costa was involved with in 2004.

“In addition to the issues at the bar, a background check revealed that the applicant, Mr. Zachary Costa, has convictions for Aggravated Vehicular Homicide, Leaving the Scene and currently has a pending Assault case from 2015,” an April 20, 2016 memo from Cincinnati City Manager Harry Black to Cincinnati City Council reads. “The Cincinnati Police Department believes that the above convictions are all directly related to his fitness to operate a liquor establishment.”

Attached to that memo is an email from District One Neighborhood Liaison officer Jeffery Ruberg to Police Chief Eliot Isaac along the same lines.

“The applicant’s criminal history and background are also concerning,” the email reads. “The Cincinnati Police Department fears that if this permit is granted the quality of life in Mount Adams will strongly be affected.”

According to court documents, Costa, then 18, hit a woman named Gloria Valles after running a red light on Glenway Avenue. Valles died at the scene. Costa, who had tried to pass another car he had been tailgating when he hit Valles, jumped out of his car and fled on foot. Witnesses to the accident caught him on Ferguson Avenue and held him there until police arrived. Costa told police afterward that he ran because he was scared. At the time, Costa had lost his driver’s license three times in the previous 14 months and was driving without one.

But that was a long time ago, he says.

“I could’ve tried” to contest CPD’s challenge to his liquor license application, he says. “Looking at the laws in Ohio, as long as the felony was more than 10 years ago, it’s irrelevant.”

Costa also pleaded no contest to the 2015 first-degree misdemeanor assault charge CPD cited in the 2016 memo. He was forced to pay $2,800 in restitution to the man he assaulted and was sentenced to 180 days probation.

Treehouse’s troubles started earlier this month, when Javier Baynes and Matthew Williams ventured out with friends to check out the new spot. But Baynes and Williams, both black, were turned away at the door. They say the doorman told them their “look was too urban” and that they would need to take their necklaces off. Baynes and Williams say that was blatantly racist.

Costa, however, says that isn’t true and that the young men were turned away simply because they didn’t meet the bar’s dress code, which forbids baggy pants and long chains.

“I started working in bars and nightclubs in 2007, and this is my 10th year,” Costa says. “This same dress code was run at Toby Keith’s, is running at Igby’s, is running everywhere else. Where the gentleman went wrong is that he lied to the general public saying that we told him he was ‘too urban.’ We told him his necklace was too long. That’s bogus and that’s a lie.”

Williams says he debated with himself for a couple days before posting about the incident on Facebook. That post caused a big furor.

“My friend and I were not granted access to your establishment basically because we were black,” Williams wrote in a review of the bar. “The doorman said, ‘I can’t let you in with those chains on.’ I retorted, ‘but they’re fake.’ He replied, ‘It doesn’t matter. Your look is too urban.’

“I could respect it if we were simply told there was a dress code… but the way your establishment works, like many others in gentrified OTR or Northside, you make it hard for people of color to want to come to your establishments.”

Facebook posts from others claiming to have experienced similar treatment soon followed, as well as a deluge of negative comments from people who had — and had not — visited the bar. Other commenters supported the bar, but the balance tipped toward angry, one-star reviews.

“I was told to leave the bar because I didn't follow the ‘dress code,’ ” a would-be patron named Avishaan Singh-Sethi wrote. “The bouncer said I could come in but an owner told me otherwise, citing my gold pants ‘were too flashy’ and didn't follow the dress code, which wasn't posted anywhere online nor in person. I notice that ‘too flashy’ is still not a dress code violation on the press release you used to try and save face in this matter. To make matters worse for you, the group I was with went to a couple different bars with my pants that were ‘too flashy’ and had no problem getting in.”

Costa calls the derision “mob mentality” and alerted Facebook, which he says took some of the comments down.

The bar on June 6 shared a post written by owner Rodgers, who is black, that exhorts commenters to “quit being sheep & go see it for yourself."

Besides Rodgers, both Costa and co-owner Casey Elder have a long history in the Cincinnati bar industry. Elder’s family has owned Crowley’s bar in Mount Adams since 1937, and Elder got his start working there before moving on to a number of other establishments like Rusconi Pizza, Ivy Lounge, Mynt (later called Jekyll) and other establishments associated with Peerless Management Group, where he met Costa. Costa says he has run or helped run numerous Cincinnati bars, including the former Toby Keith’s Bar at The Banks and Longworth’s in Mount Adams.