The Potential and Pitfalls of Cincinnati's Opportunity Zones

Earlier this year, several Cincinnati Census tracts were designated "Opportunity Zones." Here's what that could mean for neighborhoods like the West End. It doesn’t take much to see the legacy of disinvestment in Cincinnati’s West End: A quick walk through along streets like Baymiller and Freeman Avenue will tell the tale.

As you move north and west, away from the clusters of neatly-kept historic rowhouses that border downtown and past lines of largely uniform, subsidized CityWest housing, the signs of long-term racial and economic isolation increase: the overgrown lots full of forlorn cars; squat, empty brick buildings with windows cinder-blocked shut; crumbling houses and apartment buildings.

A new initiative called Opportunity Zones — a law that trades tax breaks for investment in low-income areas passed earlier this year as part of Congressional Republicans’ tax cut law — could funnel investment into the neighborhood that it hasn’t seen in decades.

But the West End illustrates the double-edged sword the new program could represent: Depending on how the rules governing opportunity zones are set, they could also let wealthy investors off with a lighter tax bill while stoking real estate fires in low-income areas that displace residents.

The crumbling buildings and vacant lots are just one side of the story in the West End, of course. About 6,140 people live in the neighborhood, according to the 2016 American Community Survey, and there are any number of businesses and organizations working every day in the neighborhood, many housed in structurally and aesthetically sound buildings. Census data shows the vacancy rate here is around 20 percent — not ideal, but not exactly the burnt-out husk of a neighborhood stereotypes might have you believe. Much of the neighborhood’s remaining architecture is historic and the focus of preservation efforts.

There is more still to the story. Racial restrictions on housing in the 19th and 20th centuries pushed many of the city’s black residents into the West End before the large-scale demolition of half the neighborhood under urban renewal and the construction of I-75 pushed as many as 20,000 mostly black residents back out again in the early 1960s.

The West End’s rough racial and economic history has left a clear legacy. Eighty-five percent of the neighborhood’s residents are black. The median household income is an astonishingly low $15,000 a year — well less than half the city’s median.

Despite the challenges, however, many of the neighborhood’s residents say they love the West End and want to stay there.

Parker stepped down from Facebook more than a decade ago, but the equity he received in the company made him a billionaire. He’s funneled plenty of that money into initiatives aimed at social causes, and his Economic Innovation Group is the latest project along those lines.

EIG drew up the initial proposals for Opportunity Zones as a way to incentivize tech entrepreneurs like Parker to use the millions they had on paper to benefit low-income communities in the real world, and then lobbied lawmakers to make the idea a reality.

The GOP’s drive to pass tax cuts through Congress last year presented an opportunity to get the idea written into law, and a bipartisan group of more than 100 lawmakers, including prominent Senate Democrat Cory Booker and Ohio’s U.S. Rep. Pat Tiberi, were willing to help. Eventually, the U.S. Senate tucked the Investing in Opportunity Act (the formal name for the legislation creating Opportunity Zones) into Republicans’ larger tax bill.

“We were able to put together something that we knew could get a lot of the parked capital investment, sidelined capital, back invested into areas that are the best emerging markets on the planet earth, which are right here in the United States of America,” Booker said on PBS’ State of Affairs with Steve Adubato in August.

While many details have yet to be nailed down, the basic idea behind Opportunity Zones is that they will incentivize those with big pots of money gleaned from capital gains — that is, equity in successful companies, stocks and other investment income — to pour that money into initiatives in low-income neighborhoods.

States have each picked 25 percent of their low-income Census tracts to receive the designation. Investors will be able to create so-called “opportunity funds” to invest in businesses and development projects in those areas. Those funds will be required to put 90 percent of their holdings into businesses or projects in opportunity zone neighborhoods, and they will have a finite amount of time — the exact limit is yet to be decided — to make those investments.

While so-called “vice businesses” like casinos and liquor stores are ineligible for opportunity fund investment, the Investing in Opportunity Act leaves the field more or less wide open otherwise. Investors could pour money into affordable housing, or into luxury condos. They could use it to provide low-cost loans to give local businesses capital to expand, or use it to back larger enterprise.

The deal represents a potentially huge windfall for investors. But will it help the low-income neighborhoods that receive the designation? That depends, some say.

“The challenge is making sure the program doesn’t hurt the people it’s meant to help,” Policy Matter Ohio’s Wendy Patton wrote earlier this year. “The federal law encouraged states to establish Opportunity Zones in places where developers are already investing — like Ohio City in Cleveland, The Ohio State University area in Columbus and Over-the-Rhine in Cincinnati. In these neighborhoods, it will be a challenge to ensure that residents are not priced out of their homes and are hired for the jobs that are created. It’s only possible with strict accountability and reporting standards, community advisory boards and community benefits agreements with teeth.”

Ohio nominated 320 of its 1,300 eligible Census tracts for the program. Like parts of OTR, West End Census tracts 264, 265 and 2 officially received opportunity zone designation earlier this year, though tract 269 — which has a median household income of just $10,000 a year — did not. 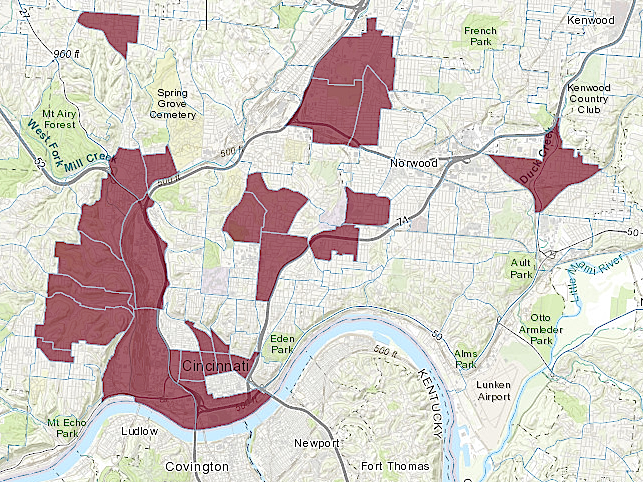 The selection of the West End tracts wasn’t entirely unexpected — last year, as FC Cincinnati made its pitch for building a major league soccer stadium in the neighborhood, President and General Manager Jeff Berding pledged the team would lobby to get the West End named as an Opportunity Zone.

It is very unlikely all of the 8,700 Census tracts across the country designated Opportunity Zones will see the kind of massive investments the legislation touts. But, with FC Cincinnati’s roughly $200 million stadium coming to the neighborhood, and with development and investment already ramping up even before talk of the stadium started, it seems like the West End has a good chance of becoming one of the neighborhoods that does.

With that investment could come some pitfalls, especially in a neighborhood where real estate speculation has already begun and where a full 84 percent of residents are renters and many can’t afford the city’s median rents.

Already, some businesses in the footprint of FC Cincinnati’s coming stadium are struggling to find new places to set up shop, and some in the community feel the changes that facility alone will bring will change the West End in ways that won’t be inclusive for them.

Initially, soul food carry-out Just Cookin’s Monica Williams was hopeful about the development of FC Cincinnati’s stadium, saying she was told she would need to move sometime before the new year and that the team would help her find a new place. She even took some trips hunting for spaces with former Cincinnati Mayor Mark Mallory, a West End fixture who works for the team doing community engagement.

Williams is less enthused about the move these days after learning that she will need to be out by November and that assistance will come as a single $20,000 payment from the team and another $1,350 from her landlord, Rev. Patrick Winkler. In addition to Williams' restaurant, Winkler's property includes his church, Lighthouse Ministries, and a long-running barber shop run by Jason Briers as well as Briers' residence and a convenience store run by Briers' brother.

The convenience store and the barber shop took the $20,000. Williams, however, initially held out, saying it wouldn't be enough for her. Eventually, she took the team's offer, though she says she will still need more help from other sources. Briers took over the barber shop from his father, who founded it in the West End in the 1960s. He says he's still looking for new locations for the shop and his residence, though he expresses some doubt about whether he'll be able to stay in the barber business — or the neighborhood.

“I don’t want to leave,” Briers said earlier this year. “My clientele is here. I don’t understand how they did us like this. I have an apartment upstairs. I’m losing a place to live and a place for business. I’m being displaced.”

There are worries more displacement could come as interest in the neighborhood continues to ramp up. Neighborhood groups and the Greater Cincinnati Redevelopment Authority — which has commissioned a housing study as part of preparations for the coming FCC stadium — are working to address those concerns. But it's clear the West End is vulnerable.

The overall makeup of the West End's housing stock won't be clear until that study is complete, but here's what we know: the neighborhood contains roughly 1,000 units of rental housing more likely to stay affordable long-term due to ownership by Cincinnati Metropolitan Housing Authority or because they were built by private developers like The Community Builders using Low Income Housing Tax Credits. Census data shows that more than 3,000 of the neighborhood's residents live below the poverty line. Another 1,300 live above the poverty level but still well below the income needed to comfortably afford the city's average rent, which has hovered around $900 a month in recent months.

Whether those residents see benefits from the investment that is likely coming will depend on what that investment looks like, and what the rules governing it will be. Congress is still working on that last part.

Patton, of progressive-leaning think tank Policy Matters Ohio, says that those rules will be critically important. She advocates for measures — including community benefits agreements, local oversight committees and others — that ensure projects sparked by Opportunity Zone designation are equitable and community-approved.

Other policy experts are similarly ambivalent about the concept so far.

"The theoretical effect of the Zone tax subsidies on local residents is ambiguous," Brooking Institution's Adam Looney wrote in late February. "It’s a subsidy based on capital appreciation, not on employment or local services, and includes no provisions intended to retain local residents or promote inclusive housing."

Looney goes on to point out that Opportunity Zones differ in important ways from past federal programs centered around Census tracts like the Clinton-era Empowerment Zones program, which included incentives for local employment, boosts to locally-owned business and provided grants to municipalities to invest how they saw fit. No such mechanisms exist within Opportunity Zones — at least, not yet.