The SkyStar Wheel is Staying at The Banks... Forever

Like a tiny London Eye of our very own

SkyStar, the once-temporary 15-story "observation wheel" (aka Ferris Wheel) at The Banks downtown, has extended its stay indefinitely. 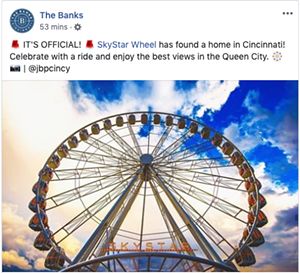 The portable contraption was originally supposed to terminate its run (which started in August 2018) in December 2018, and then decided to extend its stay through June 16. Then it  extended its stay again through the end of June while Hamilton County worked on a long-term deal to keep it around.

Must have been effective because The Banks announced via Facebook that SkyStar is staying permanently.

The wheel has been traveling across America, setting up shop in cities including Norfolk, Virginia and Louisville, Kentucky to offer elevated views and a novel pop-up tourism experience. According to a press release posted on cincinnatichamber.com, the 150-foot-high wheel was brought to Cincinnati to help celebrate the 10th anniversary of The Banks development.

The wheel consists of 36 enclosed, climate-controlled gondolas, which can hold up to six passengers. The ride takes about 12 minutes and includes four revolutions. (Reminder: Don't have sex on the SkyWheel.)