Their Roommates Had COVID-19. Their Ohio Nursing Home Kept Them There Anyway

An outbreak in a Lancaster, Ohio nursing home demonstrates what can happen in a closed system when infection control protocols lapse. 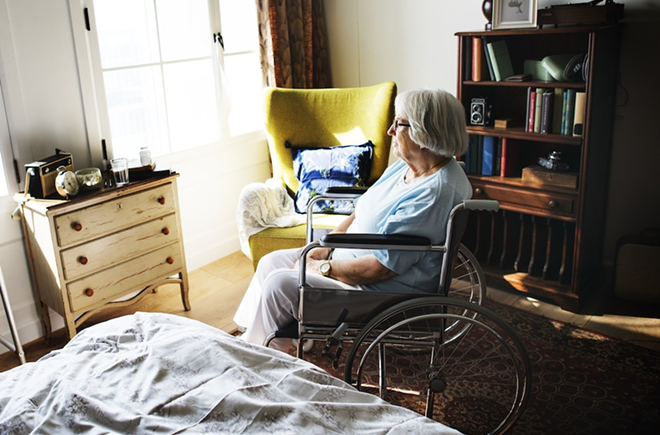 Photo: AdobeStock
It started Oct. 5 with a nurse feeling ill on her day off.

By the time the COVID-19 outbreak at Crestview Rehabilitation and Skilled Nursing Services subsided late last year, 173 cases traced back to the Lancaster facility’s staff and occupants. State inspectors determined Crestview’s poor infection control practices allowed the virus to glide through the facility.

Nine residents died from the outbreak, according to Crestview administrator Elijah Williams. The viral spread even ensnared his own grandmother, who’s a resident. She survived.

In an early wave of infections, Williams and staff decided to keep 10 residents who tested negative for COVID-19 in their living spaces with roommates who tested positive.

Williams said he made the choice — despite the coronavirus’ notorious ability to spread person-to-person in indoor spaces — given limited available rooms and to prevent further spread through the facility.

Of those 10 residents, eight contracted COVID-19. Three of them died.

Late October was a hellish frenzy as Crestview residents, caregivers and even office staff contracted COVID-19 in droves as the first residents died of the new disease.

“With the information and the [room] availability we had, we did make the right decision,” Williams said in an interview. “Our response, whether people agree with it or not, it speaks for itself.”

On two occasions in a one-month span, CMS declared residents in the facility in “immediate jeopardy,” the most serious deficiency CMS can impose on nursing homes. The designation can imperil the facility’s Medicaid and Medicare financial reimbursements.

The Ohio Department of Health, which executes facility inspections for CMS, recommended that CMS levy a financial penalty on the facility. ODH spokeswoman Melanie Amato said CMS would pick the final amount should it choose to do so.

“The lack of current effective infection control practices during a COVID-19 outbreak in the facility placed all 116 residents at risk for the likelihood of harm, complications and/or death,” a November CMS inspection report states.

Three outside experts reviewed CMS’ two Crestview inspection reports on the outbreak for this article. They all sharply criticized the decision to keep COVID-19 patients quartered with their healthy roommates.

“Immediately, I look at this and think this is a failure of our system,” said Tory Hogan, an Ohio State University professor who researches the elder care industry.

The episode underscores how a single COVID-19 infection can pose a catastrophe in a nursing home in short order. It also demonstrates what can happen in a closed system when infection control protocols lapse.

Instead of attempting to isolate infected residents from then-negative roommates, the facility preemptively prescribed 107 residents with a “preventative cocktail” of two antibiotics, regardless of COVID-19 test results or known exposure.

Outside experts as well as CMS criticized this decision. They said there’s no evidence the antibiotics help against COVID-19 and characterized them as more of a Hail Mary than serious treatment effort.

“Antibiotics kill bacteria, but are useless against viral infections such as the common cold, the flu, and COVID-19,” CMS wrote.

On Oct. 5, a Crestview nurse said she wasn’t feeling well on her day off. The next day, she tested positive for COVID-19.

It wouldn’t become apparent for a few weeks, but Ohio was in the early stages at the time of what would become a coronavirus surge 10 times worse than anything seen during the pandemic.

That first case prompted facility-wide testing of residents and staff conducted over the course of about 36 hours, Williams said.

Five residents tested positive for COVID-19 by Oct. 7. Four of their roommates who tested negative were moved to separate rooms. One pair, who were married, refused.

Dr. David Whitt, the facility’s medical director, learned of the positive cases and issued orders to give every patient living on that unit a “preventative cocktail” of azitothromycin and doxycycline (antibiotics used to treat infections), along with vitamin C and D.

He later told CMS he conducted “extensive research” about these medications and their ability to support the immune system. He also claimed it worked well in Europe.

Through October, CMS found 107 of 112 residents at the facility received the drugs, despite no evidence the residents tested positive for COVID-19. CMS said it was “simply used as a preventative.”

Dr. Leanne Chrisman-Khawam, a practicing physician and director of an accelerated family medicine program at the Ohio University Heritage College of Osteopathic Medicine, noted two key failures from the facility: the decision against separating positive cases from negative roommates, and issuing antibiotics for an unconfirmed viral infection.

Every treatment, she said, bears risks, thus why physicians don’t write wanton prescriptions. She said the two antibiotics prescribed are unlikely to help a COVID-19 patient, could do harm, and deviate from current best treatment practices.

Williams defended the decision, stating the drugs were prescribed in case residents who contract COVID-19 also suffer bacterial pneumonia, a complication of COVID-19. He also denied CMS’ finding that 107 patients took the antibiotics, claiming that some were prescribed the drugs but rejected them.

Whitt, through a receptionist and office manager at his private practice, declined interview requests.

On Oct. 14, the outbreak grew, and facility operators made the fateful decision to keep infected residents in rooms with their COVID-19-negative roommates.

Whitt, the medical director, advised Crestview staff to keep all residents in their current rooms. He said moving them around would only worsen the outbreak, reasoning the patients may test negative today but given their preexisting exposure could test positive in the future.

He told CMS in an interview he was “not that confident” in the test results because most the infected residents were not experiencing symptoms, according to CMS’ account of the interview.

Williams insisted to the Ohio Capital Journal that moving residents around would only spread the disease across different units in the facility. However, he distanced himself from Whitt’s mistrust of the tests, noting he operated under the assumption the test results were valid.

He didn’t answer when asked if there were any empty rooms in the facility at the time.

“The thing to keep in mind is it’s not just about an empty room,” he said.

“It’s also about the fact that we would be now moving this resident through the building, to another area of the building, potentially increasing the exposure and risk of exposure to residents and staff on the other hallway.”

It wasn’t until Oct. 20 that Crestview staff moved the patients produced a negative result on a new test from their positive roommates.

William Eadie, a lawyer whose firm specializes in brining nursing home abuse cases against facilities, questioned whether families were appraised of the decision to leave healthy residents in rooms with infected roommates.

“If a facility cannot adequately care for the residents they have, it is their job to make arrangements to get those residents proper care,” he said. “Leaving COVID-negative residents with roommates who were COVID-positive does not seem like proper care.”

COVID-19 has an incubation period ranging from 2-14 days, according to the CDC. This means a person exposed to the virus could become infected but not show symptoms for two weeks, and possibly longer. This gives the virus great power to stealthily spread through facilities when given the chance.

CMS lifted Crestview’s first ‘immediate jeopardy’ status when the facility completed certain “corrective actions” including new testing for any residents who may have been exposed to the coronavirus via an infected roommate.

“To me, I understand the first time around not following the recommended guidance, but continuing to go down that path when you know it’s not working is alarming,” Hogan, from OSU, said.

Things spiraled quickly. CMS’ reports do not capture every positive case and COVID-19 death but capture the barrage of positive test results, hospital visits and death.

The first fatality came Oct. 21. A COVID-19 positive resident was hospitalized with abnormal lab tests and died that same day. Another resident with COVID-19 died the next day at the emergency department.

A mass-testing Oct. 27 revealed 17 more cases among residents (a roommate of a COVID-19 patient would test positive the next day). Another 11 staff including nurses, a cook, a dietary manager, housekeepers and the activity director contracted COVID-19.

One COVID-19 positive resident died in the facility that same day.

Despite the onslaught of cases, regulators say the infection control failures continued. Inspection reports note positive and negative cases were cohorted in the same units of the facility; staff entered rooms of positive patients and then those of negative patients without donning new protective equipment like masks and gowns.

On Oct. 29, Williams told CMS he didn’t even know exactly how many residents had tested positive since the regulator lifted the facility’s “immediate jeopardy” status. A nurse told inspectors that contact tracing positive cases was not being completed because another staff department was tracking the room changes.

That same day, a once-healthy resident who was left in a room with a COVID-positive roommate died. The resident had been hospitalized eight days prior with a temperature and low blood oxygen levels.

Regulators, once again, placed the facility on “immediate jeopardy” status.

On Nov. 3, another resident who originally tested negative but was left with a positive roommate died after testing positive for COVID-19.

Williams cited staffing and PPE shortages at “crisis” level as factors in the outbreak.

CMS dismissed this. Its report notes investigators reviewed a month’s worth of facility emails and found no mention of a crisis or attempts to load up on PPE. A nursing home staffer told CMS staffers the facility had roughly 20,000 gowns, 15,000 surgical masks, 1,000 N95s/KN95s on hand.

“[The employee] denied evidence of a PPE crisis or [in]ability to get PPE,” the report states.

Williams said while there was a supply available, he was operating in crisis mode and conserving gear as is possible. High volumes of infected residents mean staff churn through PPE.

“It sounds like we had 1000s of everything, but at our burn rate, we’d have been through that in about 10 days,” he said.

Nursing homes are ground zero in the pandemic. Of Ohio’s death toll of more than 10,000, nearly 5,500 of them are residents in nursing homes and long-term care facilities.

The industry harbored staffing shortages and infection control problems before the pandemic that have only grown worse. PPE shortages, as evidenced by CMS survey data, have been chronic.

For Hogan, blame lies with Crestview regardless. The science, she said, is simple: Isolate the sick from the healthy. This isn’t always easy — residents in cognitive decline don’t always process big changes well; spatial constraints complicate everything — but the repeated demerits from CMS are a major red flag.

Any lawsuit would need to overcome a new law passed by the General Assembly this summer requiring plaintiffs to prove health care providers like nursing homes acted with “a reckless disregard of the consequences or intentional, willful, or wanton misconduct” — a high legal standard to clear.

Williams said criticism is easy from the sidelines but balancing the needs of specific individuals against the health of the general population makes for gut-wrenching calls.

“Unless you’re in here in the trenches, and you’re taking care of these residents, and trying to keep them alive, and reduce the spread within the building, you can look on the other side through the ivory tower and say, ‘You guys shouldn’t have done this,’” he said.