In the past nine weeks, more than 1.2 million Ohioans have filed initial jobless claims 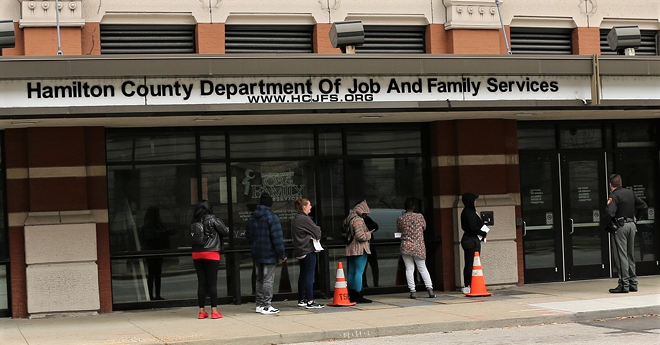 Preliminary data released Friday by the Ohio Department of Job and Family Services and the Bureau of Labor Statistics show that Ohio employers shed 823,700 jobs in the month of April. It's the most staggering month of job loss yet during the COVID-19 crisis.

In the past nine weeks, more than 1.2 million Ohioans have filed initial jobless claims. That exceeds the total claims filed in the previous three years combined, and represents more than a fifth of all working Ohioans.

NEWS RELEASE: Ohio’s unemployment rate was 16.8% in April, up from a revised 5.8% in March.
Full details: https://t.co/OT9WihAI2Q pic.twitter.com/SzgDJa9ZYL


More than 160,000 additional workers in the state have filed for emergency Pandemic Unemployment Assistance (PUA). Those are workers who are ineligible for traditional unemployment benefits. This week, ODJFS disclosed that the personal data of a small number of PUA program applicants was exposed in a data breach on May 15.

The state think tank Policy Matters Ohio has recommended, in light of the dramatic losses, broader adoption of the state's work-sharing program, which allows workers to distribute hour reductions across a staff to prevent layoffs. It has called for state policymakers to "prioritize stimulus over cuts" as well.

“More than a fifth of Ohio’s working people lost their jobs in the coronavirus shut-down,” said Policy Matters Ohio researcher Michael Shields, in a press release. “Policymakers must tap state resources to sustain those out of work, and strengthen consumer confidence as businesses reopen.”

Record job losses are of course not confined to the state of Ohio. The country has seen unprecedented unemployment numbers during the coronavirus pandemic too. But the Buckeye State continues to lag. Ohio’s April unemployment rate (16.8 percent) was higher than the country's overall by 2.1 percent. And for eight consecutive years, Ohio's monthly job growth has been lower than the national average.