These Children Are Real People

Cincinnati has the second-worst childhood poverty rate in the country. But what exactly does that mean, and what are we willing to do about it? 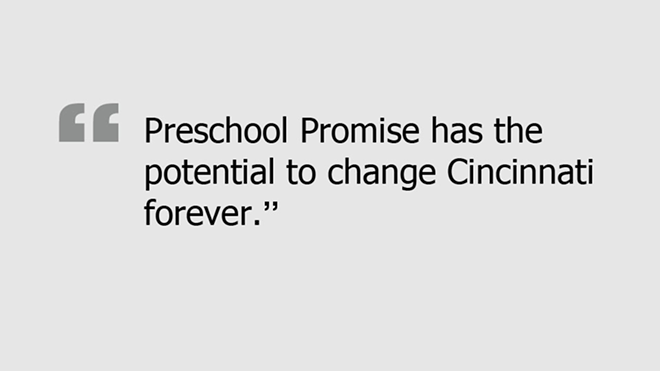 EDITOR’S NOTE: CityBeat has invited three local activists to write monthly columns on pressing issues facing Cincinnati. Mike Moroski is the executive director of UpSpring, a nonprofit working to keep children experiencing homelessness connected to their education. His column will appear in CityBeat the first week of each month.

“It is easier to build strong children than to repair broken men.” — Frederick Douglass

There is a lot of talk lately about the number of children living in poverty in Cincinnati. Most anyone can recite that Cincinnati has the second-worst childhood poverty rate in the country.

But what does that mean, and what are we truly willing to do about it?

For this first column, I want to take a look at two current big-picture items that are attempting to address and combat our city’s abhorrent childhood poverty rate.

First, there is Cincinnati Preschool Promise.

There was a tremendous amount of “promise” with this effort when it was first proposed — namely that all 3- and 4-year-olds would get two years of free quality-rated early childhood education. But that has changed.

Perhaps you have heard of the “combined levy” with which Preschool Promise is going to the ballot box. The 10-cent explanation of this combined levy is as follows: Cincinnati Public Schools (CPS) also needs its own levy to raise funds for increasing enrollment. Preschool Promise is new and might have been seen as “competing” with the CPS levy. As a result, we get one levy that has two purposes — beef up CPS’s coffers and provide early childhood education for more kids than we typically do.

It’s a good deal, and you should vote for it.

That said, the question begs to be asked:  Why wouldn’t two ballot initiatives that are both designed to help kids both pass?

“Tax fatigue!” Or… “Why should I have to pay for other people’s kids?”

My response: Because we live in a society, and we have a moral, yes, but also an economic obligation to take care of one another.

Standard rebuttal: “Economic obligation? These kids’ parents should take care of them!”

Sure. But until someone shows me the Magic Stick of Parental Power, then we have to do something for the kids.

Sick of government spending on programs that have no proven efficacy? Tired of fiscal irresponsibility? Me too.

But in Cincinnati we won’t touch our earnings tax (the raising of which would have potentially been Preschool Promise’s ballot initiative that would have “competed” with CPS’s levy).

Our earnings tax is 2.1 percent and has been for decades. Other cities with comparable populations to Cincinnati raise their earnings tax periodically to keep up with inflation. Not us.

To send every 3- and 4-year-old to a quality-rated preschool for two years, the earnings tax would have to go up by 0.15 percent (or $150 more for someone making $100,000 a year). That’s a pretty good deal considering the return on investment of early education is 10 to 1 on a bad day.

More importantly, let’s keep in mind that all of these children are real people.

The best part about the aforementioned earnings tax plan? All kids — rich, poor, middle-income alike — would be eligible for the vouchers. This means that kids from all different walks of life would be learning and growing together. Preschool Promise has the potential to change Cincinnati forever.

Still, the combined levy is awesome.

The second item I would like to address is Mayor John Cranley’s Childhood Poverty Collaborative.

The goals of the mayor’s poverty collaborative are bold. Like, super bold.

Ten-thousand kids and 5,000 adults out of poverty in five years.

This goal has come under scrutiny by some folks who say that it is outlandish. Perhaps, but I, for one, would much rather be at the table talking about how to do this than knocking on the window and criticizing it.

Is the goal outlandish? Totally.

Will more money be spent on a “study” to figure out why kids are poor? Likely.

Are a lot of the “same faces” at the table? Certainly.

Was this suggested by a controversial mayor? Absolutely.

But here’s the question that I care about: Does Cincinnati have the second-worst childhood poverty rate in the entire country? We sure do.

So I’ll take the same players at the table, a lofty goal and money spent on a study if it gets a conversation going about really doing something about childhood poverty.

Let’s take all of these naysaying items one at a time.

First: spending money on a study. You know who likes studies? Folks with money. You know what we need to help 15,000 human beings rise above their circumstances? Money. You know what else we need for the collaborative to do its job? Buy-in. Studies help with buy-in, and buy-in, like it or not, is important.

Second: the lofty goal. This criticism astounds me and makes me wonder — would people have accepted the mayor’s proposal if he had said, “You know what, let’s help four kids rise out of poverty.” No, they likely wouldn’t have, which leads me to the next criticism…

Third: The Childhood Poverty Collaborative is the brainchild of Mayor Cranley. Some people will hate Cranley no matter what he does. It doesn’t matter what he says — he will be wrong. In this instance, however, he is right. Very right. I’ve disagreed with Cranley on many issues for many years. But this is the right thing to do.

Fourth: The same faces are at the table. I attend the poverty collaborative events and I see the United Ways, the Tom Williamses, the suits — you know, the same folks. But you know who and what else I see? I see folks living in poverty, I see diversity, I see CEOs sitting at tables with people who benefit from food stamp assistance. I see bridges being built.

I am hopeful that the work undertaken by the collaborative will have meaning.

Our embarrassing childhood poverty rate in this city demands that we all humble ourselves and care more about the kids than we do about optics or politics. And to mean it — not just talk about it.

In addition to leading Upspring, MIKE MOROSKI is also a trustee on the Southwestern Ohio Workforce Investment Board (Youth Employment Subcommittee), a member of Cincinnati’s Human Services Advisory Committee (Homelessness Prevention Subcommittee) and a member of Mayor John Cranley’s Hand Up Steering Committee. Additionally, Moroski serves as a trustee on the board of Invest in Neighborhoods and is currently the vice president of the Sedamsville Community Development Corporation. He is also an executive committee member of the Hamilton County Democratic Party. Moroski’s self-described passion is fighting poverty and injustice — namely, the systems that keep people poor and society unjust. His columns will appear in CityBeat the first week of each month. Contact mike: [email protected]