These Tiny Jumping Spiders Might Be Able to Recognize Faces, Says Cincinnati Lab

They say love is blind, but that might not be the case for paradise jumping spiders. 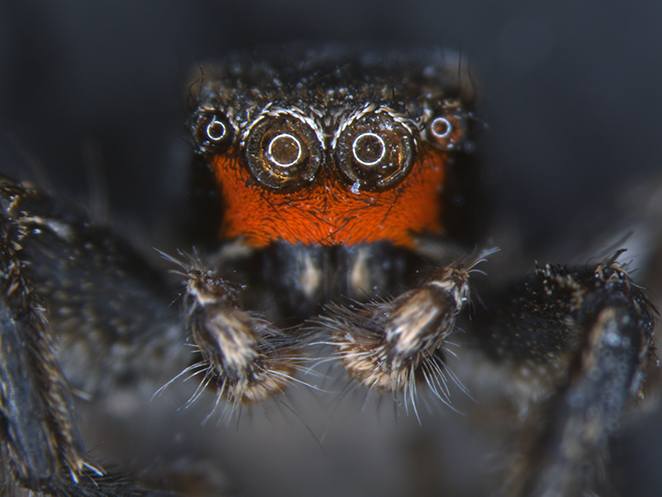 Photo: Jenny Sung
The Habronattus coecatus male face is black, red and tan — a thin line starts at the ventral/bottom edge of the carapace and goes to the two sides of the face, before the chelicerae/fangs start.

They say love is blind, but that might not be the case for paradise jumping spiders.

Researchers at the Morehouse Lab, located on the University of Cincinnati’s campus, are trying to further understand the way jumping spiders see the world, literally.

Ph.D. candidate Jenny Sung is leading the team exploring how the colorful face designs of male paradise jumping spiders affect species interactions and if females use these face designs to determine whether they will mate with a male spider.

Professor Nate Morehouse, head of the lab, says humans “find faces to be critically important to our social interactions. Even infants who are just a couple of days old can recognize the faces of their caregivers, and other primates exhibit similar qualities.”

Morehouse says that while it feels intuitive that other animals would care about faces, it turns out that we know very little about how other animals perceive faces, or if they look at faces at all.

“So what about a really alien intelligence to us, like a spider,” he asks. “Their brains and eyes are fundamentally different, so how might they go about recognizing faces and using them to inform their decisions?”

Paradise jumping spiders have a brain the size of a poppy seed and are about the size of your pinky fingernail, yet the folks at Morehouse Lab say the spiders are incredibly clever. They make the kinds of cognitive decisions that we often associate with humans. Morehouse says they can count up to four and they can plan for the future. They are able to plot strategies to get from one place to another, something referred to as "route detouring." 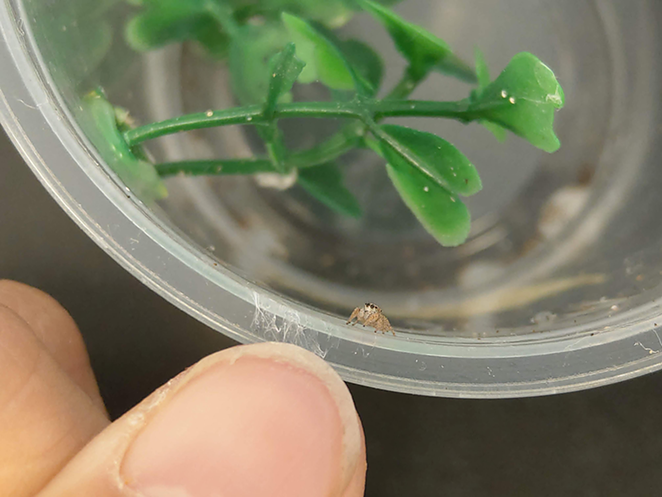 Since 2018, Sung and a small team of researchers have been developing questions, perfecting testing methods and running preliminary behavioral trials. This involves filming jumping spiders, and presenting unmodified and modified (editing the face and body of the spider) versions of these videos to the spiders to see how they react. It also involves going outside and capturing spiders to study.

The team gathers the spiders the way anyone would: they head out to a few promising sites and look at the ground closely. Some of these sites include Trammel Fossil Park, the UC Center for Field Studies in the Miami Whitewater Forest, the Edge of Appalachia Preserve and a front yard in Delhi, Ohio.

“It’s hard to overstate how small these spiders are,” says Jack Fogle, an undergraduate research assistant. “What ends up happening is you don't even look for them, you just look for the way that they move because they have a very specific movement pattern that no other bugs have.”

According to Morehouse, there is already circumstantial evidence that jumping spiders care about faces.

“We know that these little animals are very attentive or attuned to when other jumping spiders turn to look at them,” he says. “These jumping spiders can actually see almost a full 360-degree sphere around them, yet they orient their bodies to face the other spider. There's something about the arrangement of eyes and shapes that center on their face that lets them know that another jumping spider is looking back.”

The idea behind the project came from a conversation between Morehouse and Sung in 2018. While discussing potential work for Sung, the two’s discussion eventually morphed into a conversation about Chinese Peking operas, traditional plays that feature vibrantly colored masks with highly stylized patterns on them. The masked characters represent different archetypes and recurring characters have distinctive facial mask patterns. 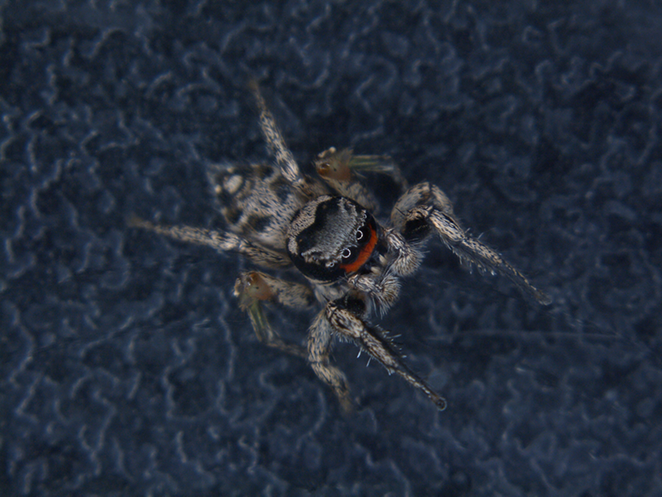 Morehouse and Sung wondered whether those facial patterns in these Chinese operas have evolved to be different from each other to aid in audience recognition of which character is onstage. Were the patterns of these Chinese opera masks shaped by our perceptual preferences and our abilities to tell things apart? Where do the shapes, lines and colors go on the mask and why?

They decided it would be worth applying the same line of questioning to the world of paradise jumping spiders, who, like the opera masks, have characteristically colorful faces.

“There is this interesting thread between our focus on how much we care about faces as humans and how many decisions we make based on faces and this world of jumping spiders,” Morehouse says. “But we always have to keep in mind that their brains — their cognition — everything about the situation is different. It's this interesting exploration of the sameness and difference of these two worlds.”

This summer, Sung plans on using a few different approaches in continuation of the project. She will run behavioral trials where she’ll calculate interaction distance and angles between male and female jumping spiders.

She also plans to use gaze tracking and computer vision analysis to try to analyze the differences in face patterns. The eye tracker used to track the spiders’ gaze is one of only two of its kind in the world. While spider eyes are fixed to the outside of their heads, jumping spiders are able to move their retinas around to look at different points of space in the world outside. Because of this, researchers can use a gaze tracker to see what they're looking at when spiders are shown specific stimuli.

“These animals have different color sensitivities and we have to really make sure they're seeing the right colors,” Sung says. “Their behaviors are also really complex and we also have to make sure that when we're setting up and proposing an experiment that it is as close to the natural world as possible.”

Sung is also planning observational studies in eastern Ohio this summer to establish whether the spiders live among each other in the same habitats and to observe how often they might encounter and interact with each other. She plans to bring back two different species of male jumping spiders from the Appalachian region. Then she will test whether a female paradise jumping spider will view the two males differently when they court by painting the male spiders’ faces with micro paintbrushes and liquid eyeliner.

“In general, this is a huge endeavor,” Sung says. “I've had a lot of help and we're at the beginning of it, so I'm very excited to see what we find as we head into the meat of the experimentation period.”

Morehouse says that for him, this project is partially about appreciating the interesting and complex little lives happening around us every day.

“We start off curious,” he says. “Many of us lose that curiosity later and I think that reconnecting to that childhood curiosity is essential for our sense of humanity. If in some small way this work, the work that Jack and Jenny are doing, or the work that other people like us are doing, helps the world to pause, take notice and fall in love with these amazing little creatures, even for a little while, then we're much more likely to act to protect the world that they live in that we share it with them.”