This Date in Music History: May 11 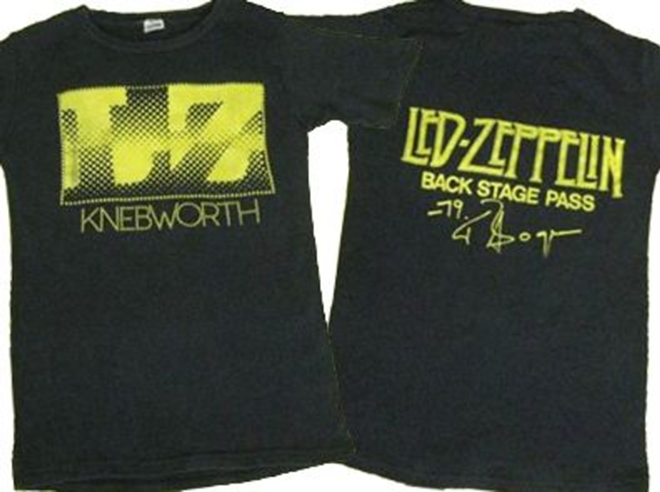 On this date last year, somebody paid $10,000 for a T-shirt. An Australian man purchased a 1979 Led Zeppelin concert T-shirt on eBay for that amount, making it the most expensive concert T-shirt ever sold. (Though I bet The Eagles got close on their various, outrageously-priced reunion tours in recent years.) The shirt appears to be a "back stage pass" from the concert.

After the sale, Denver weekly Westword posted a story on its blog counting down the next 10 most costly shirts purchased. From their research, they deemed a James Brown shirt with a bad caricature of the Godfather of Soul and the words "I'm Black and I'm Proud," an early Nirvana shirt featuring a parody of John Lennon's Two Virgin's album cover and a "Metal Up Your Ass" Metallica shirt as the next most rare, each going for $1,000.

Dulli — born and raised in Hamilton, Ohio — is currently gearing up to begin performing once again with his Whigsmates John Curley (still living, working and playing music in Cincinnati) and Rick McCollum (now living in Minneapolis). Tickets for the group's first show in 13 years — May 23 at the Bowery Ballroom in New York City — go on sale today at noon. According to the band's website, the fan pre-sale sold out and there are "a very limited number of tickets" left. The band will warm up for the show on May 22 with a performance on Late Night with Jimmy Fallon.

Will the Whigs merely do a reunion victory lap then go their separate ways again? It's unclear so far, but in interviews with Dulli, he seems very inspired playing with his old pals again. In terms of a possible new Whigs album, he told the website www.thisisfakediy.co.uk, "I am going to keep the book open and keep the possibility, all possibilities available. We're going to see what happens, and react to what happens, but right now it's wide open. Yes, maybe, maybe not, we'll see. I hate to be ambiguous, but in this particular case, I think it's best." (He also said re-issues of the band's back catalog are "definitely going to happen.")

Raise a glass and wish Mr. Dulli a happy 47th birthday. Here are a few clips of Dulli's extracurricular activities during his days with the Whigs to help you celebrate:

• In 1994, Dulli sang John Lennon's parts on the soundtrack to Backbeat, a film about early Beatles bassist Stuart Sutcliffe. On the soundtrack he was part of a band that included Thurston Moore (Sonic Youth), Mike Mills (R.E.M.), Dave Pirner (Soul Asylum) and Foo Fighter/ex-Nirvana drummer Dave Grohl. Here they are doing a song originally made a hit by Cincinnati-born music icons The Isley Brothers.

• Dulli teamed with Grohl again in 1995, playing guitar on his debut album, Foo Fighters. Grohl played all of the instruments on the album except for a guitar part on "X-Static," which Dulli provided.