Through the Covington Catholic Viral Videos, a Mirror Into Ourselves

The viral videos of the tense moments between Covington Catholic students and indigenous marchers are mirrors into America's tense mood. And if you squint into the background, you can see some very large issues in the distance. 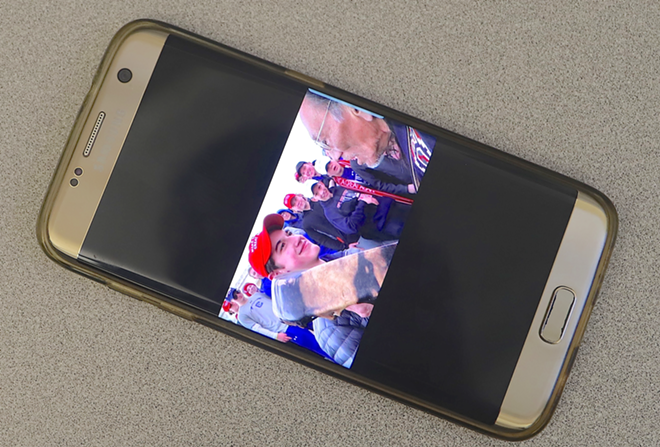 In the videos, we stare at two faces— one young and white, crowned with a red Make America Great Again hat, the other older, darker-skinned, framed by long, graying hair. The latter, Nathan Phillips, is singing and beating a ceremonial drum. The former, Nick Sandmann, is standing still, staring straight ahead, smiling. They are inches from each other.

It is Jan. 18, just after the March for Life and Indigenous Peoples March. Around the two faces, a very complex scene swirls, a distorted funhouse mirror of the current American political landscape.

As that landscape has grown increasingly more complicated, we peer into the convex mirrors of social media and lose the ability to parse that complexity and to accurately determine perspective and scale.

At the edges of the curved lenses, beyond the two faces, more young men, some wearing Covington Catholic High School attire and fresh from a school trip to the pro-life march, yell, dance, look unsure, look away, mug for the camera. A few people with Phillips’ group — Native American activists at the end of the inaugural Indigenous Peoples March — stand around their elder filming, drumming, singing. They have been at the Lincoln Memorial, where they have a permit to gather, for some time now.

And, just out of the frame, beyond the curve of the lens, four members of the Black Hebrew Israelites watch and hurl insults at the boys and the indigenous marchers, as they have for more than an hour.

The fleeting, now-viral moment has caused waves of controversy and counter-controversy, glimpses into one funhouse mirror after another. A short video showed just the tense confrontation. The whooping. The dancing. The apparent tomahawk chops. The tense, steely moment between Sandmann and Phillips.

The social media outrage came quick and heavy. The almost entirely white group of teens, some apparently from an elite private high school, were “mobbing” a Native American elder. Sandmann was smirking. There were calls to identify the students and release their personal information. Calls for worse. Someone tweeted Sandmann has “a punchable face.”

Then the longer videos surfaced — the protracted exchange between the Black Hebrew Israelites and the teens. The racial and homophobic slurs and cryptic, terrifying comments from BHI about harvesting organs. Phillips and the marchers entering and approaching the young men.

Now the students had been misrepresented. They were innocent, did not misbehave. They were brave and principled. Some media walked back earlier characterizations. Errors in coverage were corrected, apologized for.

Then another video, and another, from other angles, other funhouse mirrors. Some of those show the bravado — Covington Catholic chants. The cheers as one teen strips off his shirt and dances, taunting the BHI group. Another teen carrying a wooden stick, occasionally waving it above his head.

At some point in the background of all of these, the drumming becomes audible. As it grows closer, you hear the teens laughing, expressing confusion.

“What is even going on?” A male voice asks in one video.

In the videos, Nathan Phillips and his group move slowly, deliberately toward the space between the students and the four BHI demonstrators.

It's here that a number of funhouse mirrors converge.

Is Phillips an aggressor? A peace-maker, as he has said? An esteemed elder? An agitator?

What do you see? Do you see Phillips moving toward these teens, getting close to them? Do you see them surge around him? Is he confronting Sandmann? Or is Sandmann refusing to move?

Look into the funhouse mirror. What you see will be a reflection of yourself, your values, your presuppositions. If you say all of it is cut-and-dry, you’re saying more about yourself than about the scene unfolding.

Autumn Rain, a marcher pictured in the videos who posted some of the first footage, also posted this shortly after the incident.

"...please keep in mind that these boys are of high school age. I am tired, I am upset, and I am overwhelmed, but all I wish for these boys is to be reprimanded by their schools, parents, and friends. I posted this with the intention to spread the reality of being indigenous in 2019."

Now, look at the wider angle.

A group of teens start in whooping and doing what looks like the tomahawk chop. How do you feel about the tomahawk chop? Did you know that many indigenous people strongly dislike it, feel it is very offensive? Part of a centuries-long tradition of mockery, appropriation and dismissal? Do these young men know that? Behind one group dancing away, a younger-looking teen jumping up and down looks into the camera, then quickly looks away, bouncing less. He does not do the chop, at least not in the camera's lens.

One of Phillips’ companions and one of the teens get into a debate about native lands. Heated words are exchanged. The marcher tells the teen to “go back to Europe.” Sandmann tells the teen to stand down. Another indigenous marcher does the same for his comrade. After a few minutes of standoff, things fizzle. The bus shows up. Students start to leave.

No one there seems to have any idea we will litigate and re-litigate all of these actions over and over again.

As things wind down, one of the indigenous marchers sees an adult woman seeming to herd the students off toward the bus. The marcher asks if she is responsible for the students.

“I am responsible for myself and my life and I live a very good life,” the woman says. Then she walks away.

Who has responsibility for what? What does this kaleidoscope of funhouse mirrors tell us? What can we learn from this Rorschach test in three dimensions that, once you think you’ve locked on an image, turns and shows you other sides of itself?

The standoff we’ve all read so much about and watched so many times wasn’t about any particular policy or politics. But the stakes became incredibly high. There was no substantive debate during the incident and yet, it became about all the things deep in America’s psyche that are currently bubbling to the top — political, social and racial realities that are powerful, complicated, stubborn and, in some cases, older than the United States itself.

It became a mirror to America's current high-anxiety mood, the one with little tolerance for complexity and nuance, and we all watched ourselves in it.

The bigger something appears in a funhouse mirror, though, the more distorted it is, the harder it is to see it in detail and appreciate its complexity. But the worst thing the curved glass does is distort the size and proportions of what it shows.

If you squint into the background of the mirrors we all peered into this week, you can see some very large things in the distance.

This year’s March for Life comes at a time when the battle lines over abortion are drawn sharper, and more consequentially, than ever, and we could soon see a seismic shift in the landscape. The tension is high.

The Indigenous Peoples March, meanwhile, started outside the U.S. Department of the Interior and was at least partly about the nation’s longest-ever federal government shutdown, which has hit many indigenous communities especially hard. It has also furloughed 800,000 federal workers, and, if it goes on much longer, could impact food aid, air traffic security and housing subsidies, among other things.

But in the curved glass, those issues are tiny, off in the distance as we stare at two faces staring at each other.