"The tower adds beauty and individuality to the heart of Over-the-Rhine and is an unparalleled gem of the city skyline," says the Cincinnati Preservation Association. 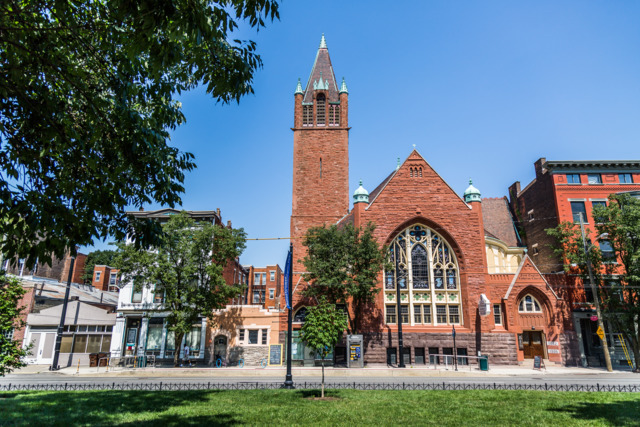 The beloved 126-year-old bell tower of Over-the-Rhine's historic First Lutheran Church (FLC) is slated for demolition — unless the church can raise $1.6 million by June 5 to save it.

The church is located on Race Street, across from Washington Park, and underwent significant restoration work (completed in 2018) after falling pieces of red limestone had started to break off the façade.

Now, the church is facing another architectural crisis.

In November of last year, the City of Cincinnati issued an emergency abatement order for the church saying, "The bell tower of the church has suffered serious deterioration, is in danger of collapse, and presents an immediate threat and hazard to the public safety."

At that time, FLC Pastor Brian Ferguson said the order didn't come as a surprise.

The church had funded its own report on the state of the bell tower, which concluded, "The bell tower structure and facade veneer are in poor condition, requiring immediate remediation to establish the stability of these build elements. Should the cost of remediation exceed viable resources, the bell tower should be razed to the level of the supporting girders."

FLC obtained estimates for a full restoration of the tower, which would replace all exterior items with new materials. But that exterior restoration would also mean the 1800s interior would still have some structural concerns, including not being accessible to those with disabilities.

As a result, the church has also obtained a quote to demolish the tower and will proceed along that avenue unless it can secure the full funding to stabilize it and make it ADA compliant. (The congregation has moved out of the church due to the safety report but hopes to return by this summer.)

The Cincinnati Preservation Association (CPA) doesn't want to see this piece of history destroyed, so it and FLC are rallying the public to raise awareness — and hopefully funding. CPA and partner foundations have already pledged $50,000 toward the restoration, which they say will total around $2.5 million.

"The tower adds beauty and individuality to the heart of Over-the-Rhine and is an unparalleled gem of the city skyline. Community investment in the Washington Park arts and cultural district has been substantial. The response on a local and national level have affirmed that wisdom of caring for those historic resources. We have very little time to avoid what would be one of our most regrettable historic resource losses," reads a statement from CPA.

FLC affirms the significance of the tower on its website, saying, "The 179-year-old church has deep roots in the community it serves. The original 2,000-pound bell that hangs in the Tower was manufactured by the Verdin Bell Company, many members were born or live within blocks of FLC, and it serves as a meeting and performance space for dozens of arts and community organizations each year."

Both CPA and FLC are asking the public for help in the form of (tax-deductible) donations, which can be made at firstlutherancincy.org/donate.

And if you can't donate, you can call or email Cincinnati City Council to ask them to allocate $1 million of the city funds to the church. A sample script is available at firstlutherancincy.org. The church asks residents to spread the word any way they can. A brochure about the campaign to save the bell tower and related project information is available at firstlutherancincy.org/save-the-bell-tower-brochure.

"The founding members of the church stated they wanted a church, not just for themselves, but a church for the whole city. The ability to not only save the tower but make it ADA compliant and provide street-level access will ensure we live up to the standards set forth by our predecessors," reads a statement from FLC, which says that 90% of visitors to the building in 2019 were there for non-church events — including theater and art performances, recovery support groups and community meals.

If the $1.6 million in funding can't be secured by June 5, the tower will be razed.

But CPA says, "We will not give up until it’s actually coming down!"

Read more about the history of the church, the bell tower and efforts to save it at cincinnatipreservation.org.