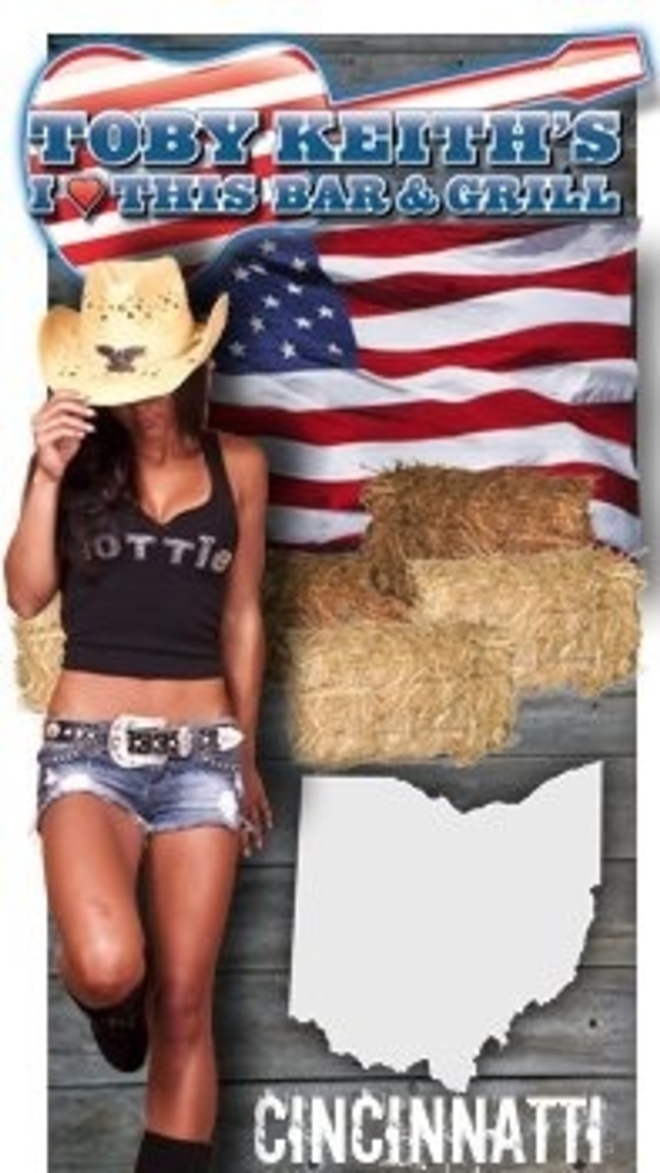 Toby Keith’s I Love This Bar & Grill this week became The Banks’ newest tenant, opening its red, white and blue doors and offering “family friendly” lunch and dinner, ongoing live performances and a guitar-shaped bar where patrons can drink beer out of Mason jars.

The official website says its family friendliness makes it “the perfect spot for everyone,” though it is assumed to have instituted some kind of protocol for children who accidentally view one of the “Whiskey Girls” the restaurant prides itself on offering (“Don’t close your eyes, Billy! It’s just the American way!”).

There currently aren’t many online reviews of the restaurant, but at least one proud American has braved the giant, Country music-themed complex and come away with an experience worth mentioning on Metromix’s online listing.

User “couintrymusiccincy” (sic) was disappointed by his experience, describing a waitress that had a bad attitude and thought she was so cute she should be Miss Universe. “Couintrymusiccincy” advised the restaurant to fire her, and noted that he would return if managers hire “pretty and legitimate waitresses” like the Las Vegas and Tulsa, Ok., locations do.

In addition to the Whiskey Girls, who apparently are allegedly “more worried about their reflection than about getting an order right” (classic Couintrymusiccincy complaint), the bar/grill/stage/conference plaza offers American and Southern cuisine such as friend bologna sandwiches and pan-fried ribs. Burger names include the “American Soldier” (Toby’s classic burger with cheese), “She’s a Hottie Burger” (melted pepperjack cheese, Hatch Valley Chiles and crispy onion straws) and “Should’ve Been a Cowboy” (Bacon, cheddar and Toby’s BBQ sauce topped with crispy onion rings). Dessert offerings include deep-fried Twinkies, “All American Apple Pie” and "Saddam's Head Pudding" (just kidding).

The décor relies heavily on a “Country cliché” aesthetic to ensure that guests don’t forget they’re in a bar owned by the guy whose artistic response to the terrorist attacks on Sept. 11, 2011 was to write a song titled “Courtesy of the Red, White and Blue (The Angry American),” which called upon the wrath of Uncle Sam, a personified Statue of Liberty and an eagle (flying, of course) to serve justice to goddam terrorists across the globe. The chorus is enough to make even the most cowardly among us raise a Mason jar in defiance.

“Ohhh Justice will be served, and the battle will rage/This big dog will fight, when you rattle his cage/And you'll be sorry that you messed with the U.S. of A./'Cause we'll put a boot in your ass, it's the American Way.”

It’s enough to bring a tear to one’s eye and cause a man to mistake his fellow American brother with one of the Whiskey Girls and tie on a big, patriotic hug (“Sorry man, I ain’t gay I just love this song and my country and when Middle Eastern people get killed." *Sniffs*).

For those interested in more information or to see the many other creative names TKILB&G has come up with for typical bar food, the official website is www.countrybaroh.com. For scary homemade videos set to “Angry American” just search YouTube.