Tracy Winkler leans on employees to boost her re-election chances 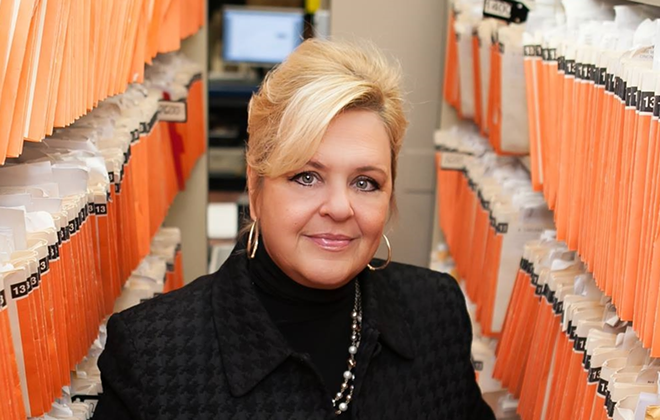 As her re-election campaign entered its final two months, Hamilton County Clerk of Courts Tracy Winkler and a top deputy sent emails asking for volunteers to put up yard signs, wear Winkler T-shirts and station themselves along a parade in Cheviot.

The recipients of the Sept. 1 emails didn’t go to regular supporters of Winkler’s campaign. They went to her own employees.

The emails were obtained by CityBeat from a clerk of courts employee who asked not to be identified. One of the senders, chief deputy bailiff Donald Robinson, told CityBeat he recognized his email, which contained a forwarded email from Winkler. Winkler, who took office in 2011 and faces a challenge from Democrat Aftab Pureval, did not respond to requests for comment.

The emails are not overtly threatening and ask for help on a voluntary basis. But they raise questions about their appropriateness in the face of state laws and county ethics codes aimed at insulating state and local government workers from partisan politics.

In an email to an unspecified group, sent at 1:51 p.m. that Thursday afternoon from a personal email account, Winkler greets “everyone” and says “there are plenty of events this weekend to get out and support our Keep Tracy Winkler … campaign.” She adds, “We’re still needing volunteers for the Harvest Home Parade” and “We need as many volunteers as we can get to help distribute our yard signs.” CityBeat's source confirmed receiving the email.

Robinson’s email was sent the same day at 2:38 p.m. from his personal email account to the personal email addresses of 40 subordinates. He shows a more insistent tone: “Please don’t let me run into you with another shirt on when you could/should have been wearing Winkler attire,” he writes. “Many of you have committed to helping in some way and I still have not seen or heard from many of you. There is still time!!!”

Winkler’s email offers 10 events to attend on Labor Day weekend. It directs volunteers to contact Jeffrey Baker, the head of human resources for the clerk’s office, and provides his personal email address and phone number. Baker is also president of the Colerain Republican Club.

Robinson says he was not aware of any objections to the pleas to help Winkler’s campaign. He says the office holds nothing against employees who choose not to join the effort.

“Nobody’s ever come to me and complained or said anything to me,” he says. “It’s kind of like, ‘Hey, let’s help.’ Nothing is mandated.”

But Bill Woods, a Cincinnati resident and former chairman of Common Cause Ohio, says such solicitations for campaign help amount to “veiled coercion” and tests of loyalty.

“It’s deplorable that employees get shaken down like this, especially public employees whose job would be in jeopardy if they don’t play ball,” Woods says. “Is this the way we want our local politics to function?”

“It is absolutely improper,” he fumes. “There is no way in hell that should be going on in this day and age.

“I particularly object to the idea that high-ranking county officers, including the elected public official, during work hours would be sending emails to employees asking them to give up their personal time to work for their boss. That’s just wrong. Then they are directing them to contact the HR person of the clerk’s office. If that’s not an implied threat, I don’t know what is.”

Ohio law prohibits the solicitation of contributions or support from so-called “classified” public employees, that is, those who aren’t “unclassified,” such as managers. Typically, most rank-and-file workers for the state, cities and counties are considered classified. The Hamilton County clerk of courts office, which employs about 220 people, considers its workers an exception, which could leave them fair game to incumbents with captive labor.

“We’ve been advised by the (county) prosecutor in the past that all of our employees are in the unclassified civil service,” said office administrator Mark Waters.

Although the state law took effect in 1998, CityBeat could find no cases where anyone was prosecuted for illegally soliciting classified public employees for money, time or any other kind of political support. Dan Tierney, a spokesman for the Ohio Attorney General’s office, says the law confers enforcement authority to county prosecutors and the AG.

“County prosecutors have the right of first refusal on that,” he says. “If they take it, we’ll never see it, unless they refer it to us as a special prosecutor. If they take a pass, then it could be offered to us by the investigating police.”

Tierney says the office could not recall any such referrals in the past.

County officials in Ohio, however, have been convicted for campaigning from their offices. For using employees and office supplies toward his re-election in 2011, former Trumbull County Engineer David DeChristofaro pleaded guilty to felony theft and misdemeanor conflict of interest. He was ordered to two years in prison and to pay $12,400. And in May, former Mahoning County Auditor Mike Sciortino got four-to-six months in a halfway house for using county computers more than 300 times for campaigning and fund-raising.

Since Winkler and Robinson had sent campaign-help solicitations to employees during office hours on a Thursday, CityBeat asked Tierney if the AG’s office would investigate such conduct.

Pureval, Winkler’s opponent in the Nov. 8 election, had no comment on the emails. The employee who gave the emails to CityBeat, however, denounced them.

“I personally feel bullied or shamed into voting for a Republican candidate or wearing shirts or putting up signage,” the employee says. “The workplace atmosphere is stressful because you have to wonder what might happen if you don’t contribute to the Winkler campaign or vote against her or a Republican.”