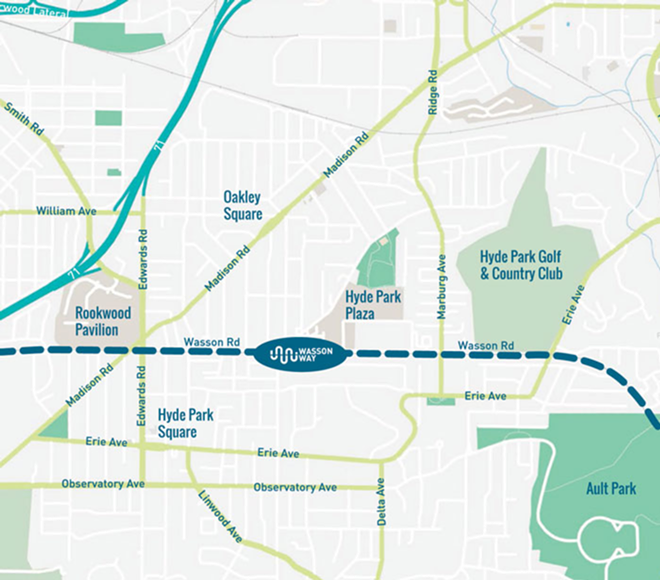 Wasson Way snakes through several East Side neighborhoods before connecting to the Little Miami Bike Trail.

But a new land-use study completed in October could pave the way for the line to be developed into a multi-modal corridor for pedestrians, cyclists and, eventually, light rail users.

The city's land-use study took into account three proposed plans created by local firm KZF. The recommended option is priced at $11.2 million and envisions a “shared rail/trail alignment.” It consists of a 12-foot-wide trail offset from the existing rail line, and it would use rail or bridge right-of-way “where cost prohibitive” or “other environmental/topography constraints exist,” according to the firm.

The firm’s two other preliminary design plans did not portray the corridor as a multi-modal network. The most expensive plan, Alternate C, is priced at $36 million and involves constructing an entirely new trail, as well as new bridges and access facilities that do not interfere with any existing rail alignment. Alternate A, the lowest cost option, suggested removing the rail line altogether and laying an asphalt trail in its place. However, this would virtually eliminate the possibility of light rail line in the future.

Adopting Alternate B could put an end to the simmering debate over the very real possibility of creating a bike path and the theoretical future of light rail in Cincinnati.

“We think that’s a good solution,” says Jay Andrees, director of The Wasson Way, a citizen-led group that strongly advocates the development of a recreational trail along the corridor. “It allows everybody to move forward with what we want to do now.”

Abandoned by Norfolk-Southern in 2009, the rail tracks begin near Xavier University and snake through Evanston, Norwood, Hyde Park, Oakley, Mount Lookout and other East Side neighborhoods before ending near the 78-mile Little Miami Bike Trail.

In 2012, urban planner and founder of planning and development blog urbancincy.com Randy Simes released an editorial strongly opposing the transformation of Wasson Way into a recreational trail. “The idea is not a bad one on face value, but should it proceed it would eliminate one of the most valuable rail corridors in the city,” he wrote, describing the Wasson Line as “ripe for light rail service with its densely populated neighborhood, vibrant business districts and key attractions along the line.”

City officials analyzed the corridor’s history, current conditions and the desired development goals of the community. The 32-page study came on the heels of preliminary design plans issued by KZF Design in June.

“While the final transportation plans for the corridor are unknown at this point, several adopted city and community plans have cited that a trail and light rail are both possibilities,” city planners wrote. “Whereas the trail would be implemented first and then transit would be considered at a later date.”

As of now, though, a light rail line is just a gleam in the eyes of advocates; no real timeline or plans have been made. What’s more imminent is the development of bike and pedestrian paths.

“If we can get funding, we would like to break ground sometime next year and have major parts of the trail open in 2016,” Andress says.

He estimates that $7.5 to $10 million is needed to construct the trail; the city pledged $200,000 toward its development in June. But there’s a hurdle: Norfolk Southern still owns the rail line. “Once the city has right of way, we’ll really be able to raise the funds for it,” Andress says. “It’s not going to be easy, but I think we can do it.”

City officials have been in negotiations with the rail company to purchase the land since March. Organizers at The Wasson Way had hoped talks would be wrapped up by early summer and say they’re not going particularly well.

“One of the problems is that the railroad is collecting between $200,000 and $250,000 a year in lease payments from different property owners along the road,” Andress says. “So that’s part of the problem — they’re making so much.”

Once a deal is struck, paperwork to transfer the property could take another six months. Until then, the city wants to keep the land off-limits from outside development — which is tricky.

“With this corridor being so crucial to the future development of multi-modal transportation in the city, the threat of potential development within the railroad right-of-way would significantly slow down, if not completely hinder, those possible public transportation opportunities from occurring,” city planners wrote in the land-use study.

City officials have lived with the threat of outside development for years, though, and have in the past approved interim development controls to protect the railway from being built upon. Two years ago, for instance, a Hyde Park business asked to purchase a portion of the track from Norfolk Southern to pave over for a parking lot. The rail company, which has remained largely apathetic over the state of the tracks, was willing to comply, but City Council stepped in and blocked the deal.

Such controls, however, are temporary, and city officials hoped to find a more permanent solution via the land-use study. The recommended fix is to zone the corridor as a Transportation Overlay District.

“A Transportation Overlay District doesn’t exist under the current zoning regulations,” Andress says. “But the City of Cincinnati is going to create this new category … specifically so it applies to the Wasson Way.”

City planners have admitted that drafting the new legislation will be complicated, but it will allow development of the bike trails to move forward in the near term while simultaneously preserving the corridor for light-rail use in the future.

Andress and other bike trail advocates have high expectations for the trail. He envisions it as a recreational haven for more than a million cyclists, walkers and runners a year. The trail, he says, will not only boost nearby property values but improve neighborhood safety ratings and local business.

Advocates also see the trail as a vital part of the Safe Routes to School Program — students could walk or bike to Xavier University, Winthrow High School, Walnut Hills High School or numerous other schools.

“Our goal is to make it an oasis, and I mean an oasis,” Andress said. “We want to make it the nicest piece of property in the city.” ©