"There was an honor system when it came to the people that came into the hall from the two campaigns,” Fox News' Chris Wallace revealed Fox News' Chris Wallace revealed in an interview Friday afternoon that President Donald Trump arrived in Cleveland for Tuesday's debate too late for a COVID-19 test administered by the Cleveland Clinic.

"There was an honor system when it came to the people that came into the hall from the two campaigns,” Wallace told Fox co-anchor Bill Hemmer.

Wallace, who moderated the ghastly Tuesday event, noted that Trump and those traveling with him arrived in Cleveland Tuesday afternoon — most of the national media arrived Sunday and Monday — and there wouldn't have been time for the Clinic to conduct tests and get results back.

Wallace's revelation is consistent with the Clinic's statement Friday morning, but should be concerning for all those who attended the debate. Both Trump and first lady Melania Trump tested positive for the virus Friday. 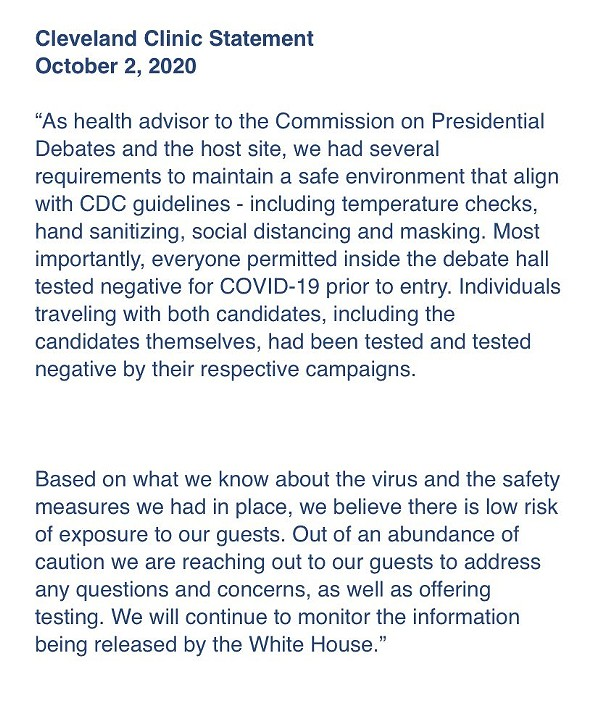 The Clinic's statement doesn't make clear when the candidates and those traveling with them had tested negative. Nor does it indicate that it was taking the campaigns at their word.

The Trumps' test results arrive after many in the President's camp, while seated in the Health Education Campus, deliberately took their masks off during the debate and refused to put them back on, despite Cleveland Clinic's rules to the contrary and urging by personnel on-site. President Trump also made light of regular mask usage in comments directed at Joe Biden during the debate.

A "cluster" of White House officials and elected leaders, including Trump aide Hope Hicks and Utah Senator Mike Lee, have now tested positive for the coronavirus as well