It's just going to keep getting hotter in the Midwest, scientists warn 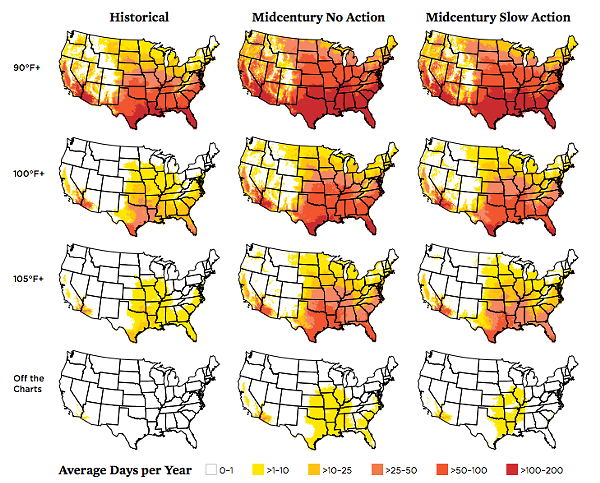 As Cincinnati heads into a weekend with extreme heat watches, a new report from the Union of Concerned Scientists warns that with no or little action on climate change, places like the Queen City could see exponential increases in days with heat indexes in the triple digits by the middle of the century.

For example, the report notes, Columbus, by historical average, should see about one day per year by the middle of this century when the heat index eclipses 100 degrees. If no further action is taken on climate change, the report warns that number could be 52 by 2075, and 16 if rapid action is taken.

“If we wish to spare people in the United States and around the world the mortal dangers of extreme and relentless heat, there is little time to do so and little room for half measures. We need to employ our most ambitious actions to prevent the rise of extreme heat," the study says. “Over the last 30 years, on average, exposure to extreme heat was the top cause of weather-related deaths in the United States.”

Dangers are most severe for children, the elderly, the sick, the poor and outdoor laborers and include heat stroke, exhaustion, heart attacks and respiratory issues. They warn:

Late in the century (2070–2099), with no action to reduce heat-trapping emissions, the following changes can be expected:

• At least once per year, on average, more than 60 percent of the United States by area will experience off-the-charts conditions that exceed the NWS heat index range and present mortal danger to people.

• The number of people who experience those same conditions—still assuming no population change—will increase to about 180 million people, roughly 60 percent of the population of the contiguous United States.

• The number of people exposed to the equivalent of a week or more of off-the-charts heat conditions will rise to roughly 120 million people, more than one-third of the population.