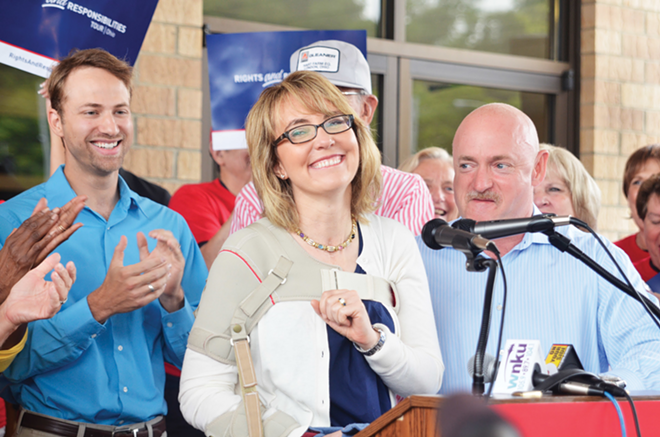 In Northside July 4, Gabrielle Giffords called on all politicians to be courageous and do what’s right.

But maybe he wouldn’t. It’s a question that will never be answered in the exchanges between buyers and sellers on Armslist, the firearm-friendly version of Craigslist. Some of the buyers on Armslist include notes that they’re willing to undergo a background check. But most don’t — they don’t have to. Armslist, born in January 2009, came from the gun community’s frustration with how “popular marketplace sites on the Internet shun firearms,” reads the site.

The Brady Law, which requires federally licensed firearms dealers to conduct background checks, has weeded out more than 1.9 million unqualified persons from purchasing guns since 1994. But how many of those 1.9 million tried again elsewhere and succeeded, and at what cost? That’s the question advocates of stronger gun laws in Ohio and nationwide have on their minds.

As of July 7, there were 8,700 listings in Ohio selling or soliciting firearms on Armslist; that’s in addition to the wealth of circulating gun shows and licensed gun stores around the state.

The problem with background checks

Like most states, purchasing a gun online in Ohio requires nothing more than a wad of cash and a few email transactions; no identification, no background check, no waiting period, no paper trail. Buying one through traditional means is only slightly more laborious. The one safehold in place, the National Instant Criminal Background Check System (NICS) implemented by the Brady Law, is only required when guns are purchased at a retail outlet from a federally licensed dealer. A dealer takes your photo ID, scans it and you’ll either be approved or denied your purchase within minutes. But even that system has proven flawed; it failed in the case of Jared Lee Loughner, the shooter who nearly assassinated former Arizona Congresswoman Gabby Giffords in January 2011.

He had legally purchased his pistol at a gun store and underwent a clean background check, but was later found to have struggled with drug and alcohol abuse and was diagnosed as a paranoid schizophrenic. He’d been rejected from the Army in 2008 for habitual drug use and suspended from Pima Community College for mental health problems, but he’d never been declared mentally unfit in a court, so his name didn’t show up in the system.

Cases like Loughner’s are tragic proof of shortcomings in the NICS system, explains Pia Carusone, executive director of Americans for Responsible Solutions and Giffords’ former chief of staff. Prohibited persons slip through the cracks and buy guns because the records just aren’t exhaustive enough, she says. “The current system now is doing its job, but it’s only processing a certain set number of [federal] records,” she explains. “There’s plenty of records at the state level that don’t make it into the system. … It’s not a quick fix.”

Not a rights issue

Two years after a bullet was lodged in her head at a campaign event and six of her constituents were killed, Giffords’ speech is labored and her right arm is permanently paralyzed, but she’s alive — and she’s a gun owner. Today, she’s also the face of Americans for Responsible Solutions (ARS), a national campaign advocating political support for universal background checks and policy changes she and her husband Mark Kelly describe as “common-sense” solutions to gun violence.

Giffords and Kelly, a former NASA astronaut, stopped in Northside on July 4 as part of a weeklong, seven-state “Rights and Responsibilities” tour to advocate legislation aimed at making it more difficult for those with mental illnesses or criminal records to purchase guns.

Kelly repeatedly emphasized that he and Giffords were firm supporters of the Second Amendment, not anti-gun. Instead, the conversation hinged on using the couple’s reputation to push for several fundamental changes to stop gun violence, including limiting high-capacity magazines and assault weapons, stopping gun trafficking by stronger penalties for traffickers and implementing universal background checks and expanding the system to hopefully make it as difficult as possible for people like Loughner to carry out crimes.

It’s true, even in Ohio. A Quinnipiac poll showed in March 2013 that 90 percent of Ohioans — including 86 percent of voters in households with guns — support universal background checks for all gun buyers. Voters’ voices are being heard — and ignored.

If the Manchin-Toomey amendment had been up for vote with the American populace rather than members of Congress, it’s likely universal background checks would already be in place today.

Instead, it was successfully filibustered in a Senate vote; it lacked just six votes it needed to move forward. Of the 46 opposing the bill was Ohio Sen. Rob Portman, who later defended his vote, saying the legislation wouldn’t be effective in stopping violence, only that it would hinder law-abiding Ohioans from exercising their Second Amendment rights.

That rhetoric falls right in line with the views of the National Rifle Association, which flip-flopped its support for universal background checks in 1999. That might be related to Portman receiving almost $600,000 in campaign expenditures from the NRA during the 2010 election cycle, when he was first elected to the U.S. Senate, according to political spending research group opensecrets.org.

On the other hand, the NRA spent about $753,000 opposing Sen. Sherrod Brown in the 2012 Congressional races after Brown had earned an “F” grade from the NRA for his strong pro-gun control voting record.

In early June, Rep. John Becker (R-Union Township) introduced a bill into the Ohio House of Representatives that would change the way semi-automatic weapons are defined under Ohio Revised Code (ORC) that would effectively allow Ohioans to purchase high-capacity magazines for semi-automatic weapons. The bill has been assigned to the House’s Transportation, Public Safety and Homeland Security, where it’s waiting for review now.

It’s already garnered favor with a hefty portion of Ohio’s pro-gun community, but it’s an unfortunate reality that recreational, law-abiding gun users aren’t the only ones who own guns, and when the gun lobby caters its policy goals only to “responsible” gun users, it ignores the wealth of subversive Loughners and Adam Lanzas, the unmonitored Armslist exchanges and unlicensed private dealers who profit from selling goods at gun shows — without background checks — across the nation. An undercover report conducted by the New York City Police Department in 2009 found that in 14 out of 21 attempts at four Ohio gun shows, unlicensed sellers sold guns without conducting background checks, even when buyers alluded to not being able to pass a background check.

The Brady Campaign to Prevent Gun Violence gave Ohio just 7 out of a possible 100 points on a 2011 scorecard ranking how effective states’ gun laws were in preventing gun violence, citing its lack of child safety laws, anti-gun trafficking measures and weak background checks and permit regulations.

It shows. From 2001-2010, 3,766 Ohioans were murdered with guns, reports the Center for American Progress; that’s 286 more intentional deaths than the 3,480 combat deaths that occurred in Iraq over the same time period.

Because pro-gun lobbyists such as the NRA hold such a staggering wealth of power, the gun lobby has created a culture in which politicians vote against the people out of fear, where gun advocates such as Portman and Becker refuse to sacrifice for the greater good.

Americans for Responsible Solutions, which formed in January, has already amassed more than 500,000 members, and Carusone says the rapid growth will symbolize the need for a massive ideological shift for politicians mired in pressure from the gun lobby.

“Stopping gun violence takes courage. The courage to do right, the courage of new ideas,” Giffords told the Northside crowd July 4. “I’ve seen great courage when my life was on the line. Now is the time to come together to be responsible. Democrats, Republicans, everyone. We must do something. Fight, fight, fight.” ©