Biden's Cincinnati Town Hall Will Be at Mount St. Joseph University, and Catholics Aren't Happy About It 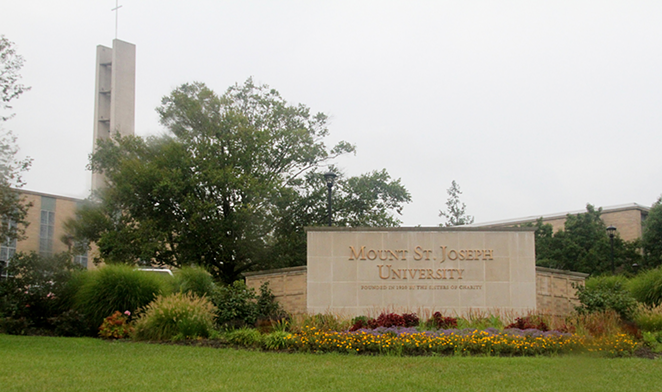 U.S. President Joe Biden will visit Cincinnati on Wednesday, but not everybody is excited about it.

Biden will be in the Queen City on July 21 for a town hall hosted by CNN, as CityBeat reported last week. The event is expected to be one hour long and will cover "a wide range of issues facing the nation ranging from COVID-19 to the economy," the cable network said.

The event's location — previously undisclosed — has been revealed this week as Mount St. Joseph University, a private Catholic college in Delhi Township. The school offers undergraduate degrees, master's degrees and doctorates and has about 2,000 students.

As of CityBeat's publication time, the news section of the Mount St. Joseph University website does not feature a press release about Biden's visit, but the university confirmed the information to WCPO this week.

Biden is Catholic and regularly attends Mass but supports Democrats' pro-choice stance in regards to abortion. Earlier this year, some conservative Catholic bishops tried to propose more guidelines about who can call themselves Catholic while supporting pro-choice activities, but the Vatican warned against it.

For that reason, local Catholics aren't happy about Biden's town hall being held in Cincinnati — especially at a Catholic university.

Dusty Rhodes, Hamilton County's auditor and a Catholic, repeatedly tweeted his displeasure on Tuesday. "It's official. The Sisters of Charity are a disgrace," Rhodes tweeted, referring to the group of religious women who founded Mount St. Joseph in 1920.

Rhodes also used Twitter to agree with outraged comments he had seen on Facebook, a different social media platform.

Rhodes also tweeted this, either calling Biden a "fake" Catholic or a "fake" president.

The Cincinnati Enquirer reports that anti-abortion group Right to Life of Greater Cincinnati is against Biden's visit and is asking Catholics to contact Mount St. Joseph officials and Cincinnati Archbishop Dennis Schnurr with their concerns.

Schnurr sent the following statement to CityBeat via email:

Archbishop Dennis M. Schnurr has not been contacted by any involved party about the upcoming visit of President Joseph R. Biden to Cincinnati to participate in a CNN town hall meeting at Mount St. Joseph University. Archbishop Schnurr has therefore not been asked for, nor would he have granted, his approval for any such event to occur on Catholic premises. Mount St. Joseph University operates independent from the Archdiocese of Cincinnati.

Biden's visit will occur six months after being sworn in on Jan. 21 and about three months after Vice President Kamala Harris met with Cincinnati Mayor John Cranley, U.S. Sen. Sherrod Brown and Cincinnati Metro officials in April about using public transit and other transportation initiatives as economic drivers. While in Cincinnati, Harris stopped by downtown's BlaCk Coffee Lounge to order a house "Wakanda" coffee (Wakanda is the fictional African country in Black Panther and other Marvel Comics/Marvel Entertainment properties).

The event comes as the administration has made progress in fighting the Covid-19 pandemic with a strong vaccine rollout, but concerns are rising over the slowing the pace of vaccinations in recent weeks. The US now faces an uptick in Covid-19 cases, driven in large part by the highly transmissible Delta variant. Forty-five states are experiencing a surge in new cases -- the vast majority among unvaccinated people -- and the daily pace of people becoming fully vaccinated is down 84% since mid-April, according to the US Centers for Disease Control and Prevention.

CNN noted that Biden won Cincinnati's home of Hamilton County in the 2020 election. It was "one of just seven Ohio counties he took from former President Donald Trump in that race. Ohio as a state went for Trump 53.3% to 45.2%," the network said.

Biden's town hall in Cincinnati will air at 8 p.m. Wednesday, July 21, on CNN's cable network, website, apps and other properties. CNN anchor Don Lemon will moderate, and a limited number of locals will be invited.

WCPO reports that according to the Cincinnati Police Department, Biden will travel within the Cincinnati area between 3 p.m. and 11 p.m. on Wednesday.