Vance's and Ryan's Battle Was Ugly, and 8 Other Greater Cincinnati News Stories You May Have Missed This Week

Catch up on a contentious debate, a first-ever playoff berth, a looming smoking ban and more. 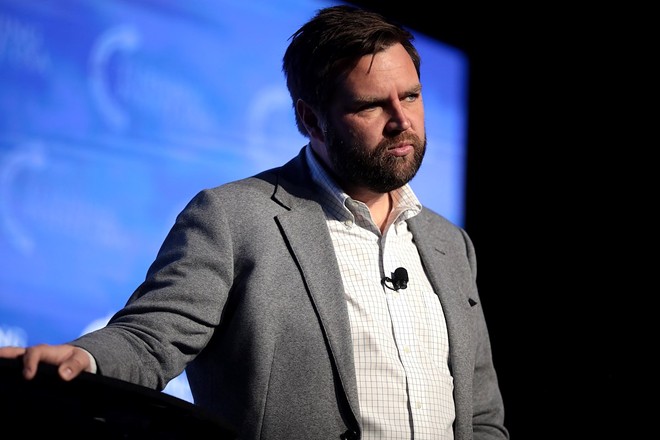 This week, FC Cincinnati made history as the team clinched its first playoff berth ever (the good news comes shortly after the Cincinnati Bengals saw the largest home crowd on record. But sports haven't been the only thing Cincinnatians are thinking about – there's also been a contentious political debate, a pending smoking ban and fentanyl overdoses. Luckily, the much-anticipated BLINK festival is back and $2 tacos during Cincinnati Taco Week are about to begin.

Read on for this week's big news headlines.

Twitter Roasts Middletown Native J.D. Vance after Debate with Tim Ryan for Ohio's U.S. Senate Seat
Twitter is reacting to the acrimonious Oct. 10 debate between Ohio’s U.S. Senate candidates J.D. Vance (Republican) and Tim Ryan (Democrat), the first debate between the two. Ryan is a 10-term congressman, while Vance is an author and venture capitalist (Vance hails from Middletown). Twitter users especially reacted to one moment in particular, when Ryan dragged Vance for letting former President Donald Trump call Vance an “ass-kissser” during a September rally in Youngstown that was inexplicably scheduled during an Ohio State University football game. See CityBeat's collection of the best tweets summing up the debate from both sides.

FC Cincinnati Heading to MLS Cup Playoffs for First Time Ever, Gets No. 5 Seed
Local soccer fans are ready to make some noise as FC Cincinnati heads to the Major League Soccer Cup playoffs on Oct. 15. The team went into the record books with its 5-2 win on the road over D.C. United, clinching its first playoff spot ever. The Orange and Blue scored four of its five goals in the first half of the final regular-season game, marking another new franchise record. Read CityBeat's story about the history-making game, and find out how to attend watch parties for fans.

Dayton, Kentucky's Indoor Smoking Ban Goes Into Effect Next Month
Dayton soon will become the 33rd city in Kentucky to ban indoor smoking. Starting Nov. 6, smoking will be prohibited inside all buildings and places of employment where the public is permitted, according to a press release from the Northern Kentucky Health Department. Until now, smokers have been able to light up and wet their whistle at beloved neighborhood bars like Rose Room and Tony’s Ole Saloon. Read CityBeat's story to see the types of structures where smoking now will be outlawed.

Northern Kentucky Pro-Choice Demonstrators Ask Voters to Reject Amendment 2
Pro-choice demonstrators rallied across the country on Oct. 8 during the “Women’s Wave,” organized by Women's March, and in Covington, a small but boisterous crowd of protestors called on elected leaders to restore abortion care access to Kentuckians and for voters to turn down Amendment 2 in November's election. Amendment 2 asks voters if they want to put a sentence into the state constitution that could effectively outlaw all abortions in the state. Read CityBeat's story about why demonstrators say abortion access is important, and see photos of the best signs from the protest in Covington.

Hamilton County Judge Indefinitely Blocks Ohio Abortion Ban
A Hamilton County judge has once again blocked the six-week abortion law from taking effect in Ohio, and affirmed abortion clinics’ arguments in a lawsuit that abortion is health care. “Abortion is safe health care to which Ohioans have a right,” Judge Christian Jenkins said. The judge blocked the Senate Bill 23 indefinitely as the lawsuit continues, with abortion clinics wishing to see the law thrown out completely. Read CityBeat's story to see what doctors are saying about how the ruling helps their patients.

How to Protect Yourself from a Fentanyl Overdose as Deaths Increase in Hamilton County
Hamilton County Public Health (HCPH) is warning residents about an uptick in drug overdoses related to fentanyl, saying the number of overdoses since Sept. 30 indicate "some abnormal changes in overdose related activity causing suspicion for high levels of fentanyl in the drug supply." The county agency reports there were 16 overdose deaths between Sept. 30 and Oct. 5. More than a dozen others were admitted to emergency departments for overdoses on Oct. 4 and 5 alone. Read CityBeat's story to learn about another local county seeing a spike in overdoses and how to protect yourself.

Cleveland Joins Cincinnati in Banning LGBTQ+ 'Conversion Therapy' on Minors
Like Cincinnati and two other Ohio cities, Cleveland's city council has passed an ordinance outlawing so-called LGBTQ+ "conversion therapy" on minors within the city limits. Cincinnati was the first city in the country to ban conversion "therapy" for minors, with Cincinnati City Council voting 7-2 in favor of the legislation on Dec. 9, 2015. Read CityBeat's story about what's in Cleveland's new legislation.

Multiple Baskets Stolen from Covington's Devou Park Disc Golf Course Days After Opening
On Oct. 8, a brand new, 18-hole disc golf course opened up at Covington’s Devou Park. Just days later, someone stole 12 of the 18 holes and destroyed another. The stolen disc golf baskets are worth over $5,000. Read CityBeat's story about how to help catch the person responsible.

The 15 Worst Kroger Stores in Greater Cincinnati, According to Reddit Users
While Greater Cincinnati offers its fair share of grocery shopping options, no store is quite as trusted as Kroger, which was founded here in the Queen City. According to Reddit, though, there are a number of Kroger stores that are unsafe and in disrepair. See CityBeat's photos of the Kroger locations where residents are seeing problems.