Video of BLM Protest in Bethel, Ohio Goes Viral After Attendee Gets Punched in Head by Guy in Confederate Flag Bandana 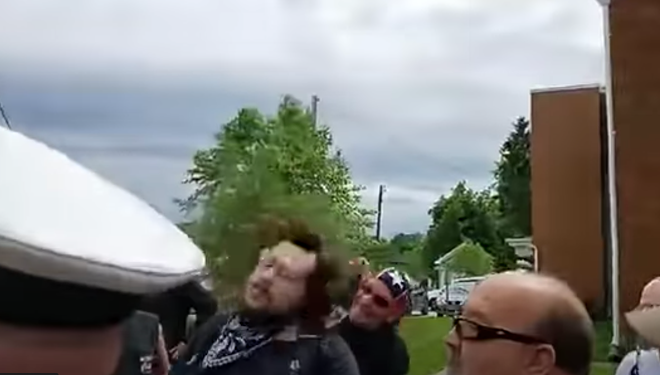 A Southwest Ohio protest for the Black Lives Matter movement has garnered national attention after demonstrations turned violent when "several motorcycle gangs, back the blue groups and second amendment advocates" arrived in large crowds in response to the protesters, according to the Village of Bethel.

The planned peaceful protest in Bethel, Ohio was organized by a local group who referred to themselves as Bethel’s Solidarity with Black Lives Demonstration, and was announced via a Facebook post by the Village of Bethel on June 12, saying: "Please know that the Village of Bethel fully supports the first amendment right to assemble and demonstrate and will stand behind any peaceful demonstration on public property. The Village of Bethel Police Department will have a presence at the event to ensure the safety of all participants, citizens and property owners."

The demonstration was scheduled for 3-4 p.m. on Sunday, June 14, but after word got out about the planned protest, "various other groups became aware of the scheduled demonstration and made plans to attend," said the Village of Bethel in a Facebook statement.

What was initially planned to be a crowd of 20 to 25 BLM demonstrators became around 80 to 100 after the event was shared on social media, and as large crowds of motorcyclists began to arrive on the scene, the initial attendance at the anticipated protest start time of 3 p.m. amounted to roughly 750 to 800 people, with the opposing protesters heavily outnumbering the BLM demonstrators.

The BLM demonstrators were forced to move from their originally agreed upon location two blocks to the east.

"Towards the latter part of the event, the various other groups began to move toward the Bethel’s Solidarity with Black Lives Demonstration area. This resulted in approximately 10 incidents. Those involved were removed from the scene and there are ongoing investigations concerning those incidents," reads the Village of Bethel post.

According to the Facebook post, a portion of the Clermont County Deputies that were scheduled to assist the Bethel Police Department Officers were called to another situation last minute, however, additional deputies were subsequently dispatched to help.

As videos of the altercations have been circulating across the internet, a clip from one video in particular by Aaron Copeland quickly went viral, and was shared by well-known civil rights activist Shaun King on his Twitter on June 16.


The video shows a BLM protesters being punched in the back of the head by a man wearing what appears to be a Confederate flag bandana, while an officer watches directly in front of him. People can be heard shouting "USA," "Get the fuck out of here, boy" and "Here's your hat, motherfucker, shove that in your ass you little bitch," during the clip.

The assault victim posted about his experience on Reddit, explaining that the video was somewhat misleading. "The officer in front of me asked me to step back for my safety and for me to file a report. I believe there are a lot of bad cops out there, but I respect a lot of the ones in this town," he said in his post.

In the Facebook post, the Village of Bethel asks that information regarding the suspects or victims involved in any of the incidents to be sent to the Bethel Police Department.

Following the protest, the Village of Bethel announced a 9 p.m. curfew for the city "continuing day to day until rescinded."

Another protest took place on June 15, and according to comments on the post regarding the curfew, more may continue this weekend.